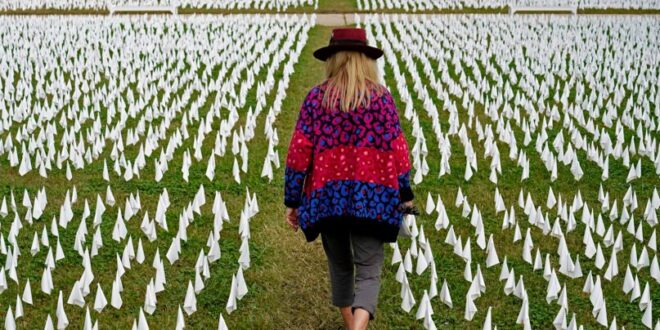 The Poor People’s Campaign, jointly led by the Rev. William J. Barber II and the Rev. Liz Theoharis, doesn’t want America to forget these COVID-19 victims. On Monday, the group staged a national service of eulogy and remembrance two miles from the U.S. Capitol to urge the nation’s leaders to act.

The service, on the steps of National City Christian Church in Washington, D.C., was broadcast on social media and include live speeches and pre-recorded clips of people who have lost loved ones to COVID-19, or have faced job losses, home evictions or lack of healthcare to pay for treatment.  Jewish and Hindu clergy will also be represented.

Death That Didn’t Have To Be

“Right now we have a situation of death — necropolitics, the politics of death — that did not have to exist,” said Barber, the North Carolina preacher who began the Moral Monday protests and led Monday’s service remotely. “It’s political negligence and crimes against humanity.”

Earlier in the day, the Poor People’s Campaign organized car caravans circling 25 state capitals demanding political leaders focus on the deaths of Americans, so many of whom came from marginalized communities.

The campaign is calling on President-elect Joe Biden and his administration to enact a policy agenda centered on the poor. It would like to see a stimulus coronavirus relief bill, free vaccines, when they become available, a $15 minimum wage and universal healthcare.

“We want to showcase to the world that poor people are not waiting to be saved but are rising together in power to insist that we must mourn and organize,” said Theoharis, who will also speak remotely from New York City.

More than 12 million people in the United States have been infected with the coronavirus, which has exposed and compounded inequality. The U.S. economy remains depressed, with a 6.9% unemployment rate.

Poor people are more likely to have underlying health conditions like hypertension, diabetes and heart disease. They are also more likely to have jobs in parts of the service sector that put them in close contact with the public and expose them to the virus.

Black Americans are infected with COVID-19 at nearly three times the rate of white Americans, according to a document from the National Urban League.

“We have to be out there sounding the alarm, mourning and insisting that we come forward with these strong and powerful demands,” Theoharis said.

Previous We All Live Together. One Planet. One People, Please.
Next We Can All Find Something To Be Thankful For This Year, Even Me