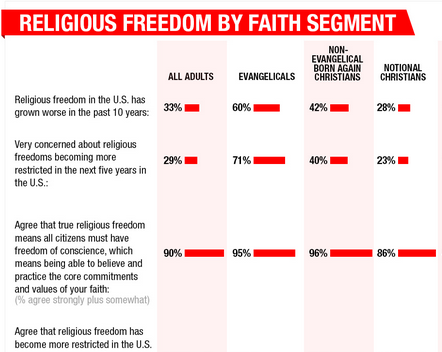 WASHINGTON (RNS) Half of Americans worry that religious freedom in the U.S. is at risk, and many say activist groups — particularly gays and lesbians — are trying to remove “traditional Christian values” from the public square.

The findings of a poll published Wednesday (Jan. 23), reveal a “double standard” among a significant portion of evangelicals on the question of religious liberty, said David Kinnaman, president of Barna Group, a California think tank that studies American religion and culture.

While these Christians are particularly concerned that religious freedoms are being eroded in this country, “they also want Judeo-Christians to dominate the culture,” said Kinnamon.

“They cannot have it both ways,” he said. “This does not mean putting Judeo-Christian values aside, but it will require a renegotiation of those values in the public square as America increasingly becomes a multi-faith nation.”

Religious freedom has become an increasingly important political issue within the last year, as Republican candidates hammered President Obama for a contraception mandate that many conservatives feel tramples on the religious freedom of employers who must cover birth control in their health plans.

The poll of 1,008 adults showed that 29 percent of respondents were “very” concerned that religious liberties are under threat, and 22 percent “somewhat” concerned. Evangelicals were the religious group most likely to be concerned, at 71 percent.

Asked for their opinion as to why religious freedom is threatened, 97 percent of evangelicals agreed that “some groups have actively tried to move society away from traditional Christian values.”

And 72 percent of evangelicals also agreed that gays and lesbians were the group “most active in trying to remove Christian values from the country.” That compares to 31 percent of all adults who held this belief.

The results are somewhat at odds with a March 2012 poll sponsored by Religion News Service and the Public Religion Research Institute, which found that a majority of Americans – 56 percent – did not feel that religious freedom was under attack in this nation.

But results between the two polls align in that the PRRI survey concluded that white evangelical Protestants were the most worried about religious liberty. It found them to be the only religious group in which a majority (61 percent) considered it under threat.

The Barna poll, conducted in November 2012, has a margin of error of plus or minus 3 percentage points.

Previous Make healthy choices in 2013
Next Losing our religion