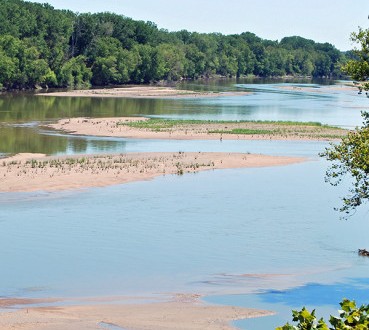 (RNS1-JULY 15) The Kansas River's water levels are being affected by sand and gravel dredging, according to the American Rivers organization. "Dredging widens and deepens the river channel, lowering the water level of the river and the water table," according to the organization. "Dwindling access to water is a major threat to humans, animals, and plants, including agriculture, especially considering the looming concern of climate change." For use with RNS-CLIMATE-PULPIT transmitted July 15, 2014. Creative Commons image by Jolynne Martinez

(RNS) A significant majority of Americans say combating climate change is a moral issue that obligates them — and world leaders — to reduce carbon emissions, a Reuters/IPSOS poll has found.

The poll of 2,827 Americans was conducted in February to measure the impact of moral language, including interventions by Pope Francis, on the climate change debate. In recent months, the pope has warned about the moral consequences of failing to act on rising global temperatures, which are expected to disproportionately affect the lives of the world’s poor.

The result of the poll suggests that appeals based on ethics could be key to shifting the debate over climate change in the United States, where those demanding action to reduce carbon emissions and those who resist it are often at loggerheads.

“When climate change is viewed through a moral lens it has broader appeal,” said Eric Sapp, executive director of the American Values Network, a grassroots organization that mobilizes faith-based communities on politics and policy issues.

“The climate debate can be very intellectual at times, all about economic systems and science we don’t understand. This makes it about us, our neighbors and about doing the right thing.”

Some observers believe the pope’s message can resonate beyond his own church.

“The moral imperative is the way to reach out to conservatives,” said Rev. Mitch Hescox, president of the Evangelic Environmental Network, a large evangelical organization that advocates for action on climate change.

Talking in terms of values is “the only way forward if we are to bring our fellow Republicans along,” he added.

Some Republican politicians have begun to search for a new message on climate change, in an attempt to distance the party from those who oppose most efforts to limit greenhouse gases and have questioned the science explaining human-caused climate change.

Whether shifting moral beliefs can translate widely into a willingness to modify carbon-intensive lifestyles and assume the costs of weaning the U.S. economy off fossil fuels remains to be seen. U.S. sales of trucks and SUVs have been rising in recent months, for example, spurred by lower gasoline prices.

But moral questions are increasingly invoked in the climate debate — and not just among anti-carbon activists.

In a Feb. 12 speech to oil industry leaders in London, Royal Dutch Shell CEO Ben van Beurden noted that “the issue is how to balance one moral obligation, energy access for all, against the other: fighting climate change.”

The U.S. Environmental Protection Agency has also wrapped some of its anti-pollution initiatives in the language of “climate justice,” likening the battle against climate change to the mid-20th century fight for civil rights.

Pope Francis also vowed to make fighting climate change a centerpiece of his papacy, using his authority as head of the world’s 1.2 billion Roman Catholics to push political leaders toward a deal at a United Nations-sponsored conference in Paris this December that is aimed at cutting carbon emissions.

The pope has confronted critics of climate change science that finds human activities responsible for increases in global temperatures, saying in January that it is mostly “man who has slapped nature in the face.”

Sixty-four percent of those polled agreed with the pope that human activities are largely responsible for the rising CO2 levels that scientists say drive climate change.

The pope also criticized the negotiators at a global climate conference in Peru last December for “a lack of courage” and has promised to issue an encyclical – a letter setting out papal doctrine – on climate issues that he hopes will add momentum to getting a deal in Paris.

In turn, he has been attacked by those who deny the scientific findings on global warming for aligning himself with environmentalists.

But only one in 10 saw him as a voice of authority on the issue, on a par with Democrats and Republicans in Congress and less than the percentage citing President Barack Obama (18 percent). The poll respondents also said that United Nations scientists and a popular U.S. television host, Bill Nye “The Science Guy”, carry more authority on climate change than U.S. politicians.

The Reuters poll was conducted from Feb. 13 to 25 and the results were weighted to current U.S. population data by gender, age, education and ethnicity. It has a credibility interval – which measures the survey’s precision – of plus or minus 2.1 percentage points.

View All Posts
Previous Judaism’s stance on equal pay
Next The gold or black dress debate shows the nature of knowledge, compassion