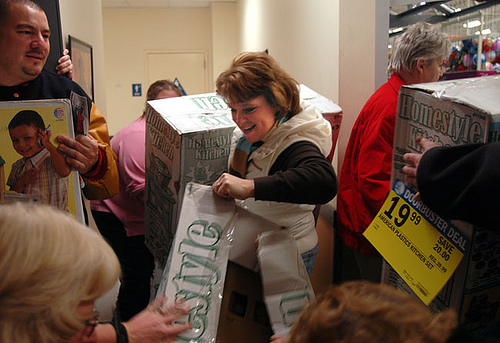 POLL: Are you going to go shopping on Thanksgiving?

While some stores are offering a jumpstart on holiday sales by opening up on Thanksgiving Day, others are vowing to keep their doors shut.

Stores that plan to stay closed and allow their staff the day off include  Costco, REI, Nordstrom, Burlington Coat Factory, Apple and Radio Shack.

Retailers that plan to open up after Thanksgiving dinner include Walmart, Target, Best Buy, Kmart, Macy’s, Kohl’s, J.C. Penney and Toys R US.

Will you be among the early shoppers?

Choice. In the end the market determines freedom in most cases. When a community devalues tradition, family and even faith, the underlying motivations for living a life or business that puts other people, employees or community above revenue crumbles. What is sacred other than self if you remove the sacred from day to day life and it’s practices?

I bet folks will if they run out of beer, wine or whipping cream for their pumpkin pies.