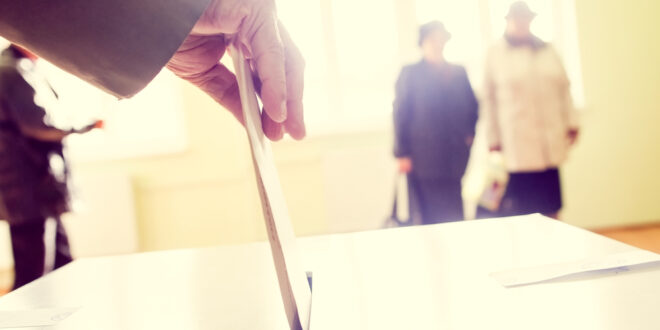 Hand of a person casting a ballot at a polling station during voting.

Is there really nothing we can do about gun violence?

We’re burdened to live out these days,
While at the same time, blessed to outlive them.

Like most of us watching the news recently, I was shocked and horrified by the shootings in the Uvalde school on May 24. In a country numb from hundreds of shootings, I was surprised I could still feel anything about them at all.

However, after the first paralyzation began to wear off, I was frustrated for a different reason. After every one of these events I’ve noticed, in addition to the furious arguing about an appropriate response, there are a significant number of people who say things such as, ‘Well, there is nothing we can really do about this, so why should we bother?’ We say this several times a day on social media after a terrible thing happens instead of doing anything about it. I understand people are processing their feelings, but often, that’s the beginning and end of our action on a subject.

A couple of things — first, this is not entirely true. A lot has changed. Second, this (convincing you everything is so terrible there is no point) is a deliberate strategy designed to manipulate you into not acting. People who study authoritarian and corrupt governments tell us so, and I think we should listen to them. Right now, we are largely defeating ourselves with this strategy. We don’t even need an authoritarian to do it. But that doesn’t make it less effective.

Since Columbine, the group Moms Demand Action and the Parkland students have worked tirelessly to help pass gun reform, and while it’s true they haven’t made much progress at the federal level, many state laws have changed for the better.

For example, in Washington state, according to the Giffords Law Center (started by former Arizona Representative Gabby Giffords after she was shot in an assassination attempt in 2012), in 2016 and 2017, voters approved ballot measures that enacted universal background checks and an extreme risk protection or ‘red flag’ law.

In 2018, Washington voters also approved measures to raise the minimum age to buy guns and enact a child access prevention law. In recent years, the state has also established a state office of firearm violence prevention, enacted critical ghost gun legislation and invested in community violence intervention programs. In 2020, Washington had the 12th-lowest gun death rate in the country.

Twenty-one states have passed laws requiring background checks for every gun sale, and 19 states and the District of Columbia now have red-flag laws allowing police to remove firearms from people who are a potential danger to themselves or others.

People are more comfortable with criticizing the status quo than they are getting involved to change it, because that’s long and boring. And I believe many people are honestly disheartened and discouraged at what they believe is the glacial or nonexistent pace of change.

Now that’s not to say something isn’t deeply broken at the federal level, because there’s something wrong with a system in which 50 people can stop measures from passing which are highly popular. In fact, gun control measures are popular with a majority of the American public, even in conservative states such as Texas.

Since the passing of the case Buckley vs. Valeo in the 1970s, which eliminated limits on campaign contributions, and corresponding cases such as McCutcheon vs FEC and Citizens United, the people’s influence in politics has often been reduced to how much we can pay to participate.

But the greatest barrier to change is not any of these — it’s citizen apathy and disengagement. After all, how many times have people risen up to protest Buckley or Citizens since they happened? How many people even know what these cases are, or how they influence our politics every day? There have been movements to reduce the influence of money in politics, including bipartisan efforts, but not a widespread dissatisfaction among the people accompanied by focused effort.

Perhaps it took something like a school shooting (or a couple hundred) for us to notice how bad it’s gotten, but let’s be honest, it’s been rotten for a while.

As Politico states in their article about why a relatively small minority of Texas voters can determine the direction of the gun laws in the state, “What leads to this disconnect in Texas…” is “primarily, an election system that prioritizes the policy positions of a relatively small slice of the state’s most conservative voters who dominate Republican primaries through gerrymandering and low-turnout elections.”

So basically, a small minority of one political party is trying to run the country in a direction with which the vast majority disagrees. If I’m not mistaken, these conditions are the ones we created America to escape from. Yet, where is the concerted effort to defeat this problem? It exists in small local pockets and in certain periods of time (for example, in the run-up to the 2020 election), but after such events are over, people often disengage and assume the battle is won. Meanwhile, the folks currently running things in states such as Texas have devoted decades to their cause and are seeing the rewards for their work.

I think people say things like ‘nothing has changed’ both because they might truly believe this and because it’s easier to say this than to realize that change is slow, dull, often discouraging and requires our own concerted effort. Looking at history, as valuable as it is, can distort our view of how things happened, because it can seem like developments such as fair wage laws or the civil rights movement simply happened in a few summers of marches and riots, when they took decades of reform to build. The U.S. women’s rights movement formally began in Seneca Falls in 1848, and the 19th Amendment was effective (for white women) in time for the 1920 elections — 72 years later.

A growing number of people believe they should opt out of the entire voting and democratic process on both the left and right these days, who appear to be aiming for what can only be called authoritarian methods — the ‘burn it all down and start over’ types. Hypothetically, if this were to succeed, they would be left with the same set of problems as before, but in a different setting. Because what they never addressed was how to govern and solve a problem. Also, no matter what side you’re on, this method is inherently anti-democratic.

Part two can be read here.

Previous Tips to Having Religious Conversations with Your Kids
Next The Afterlife: One World at a Time