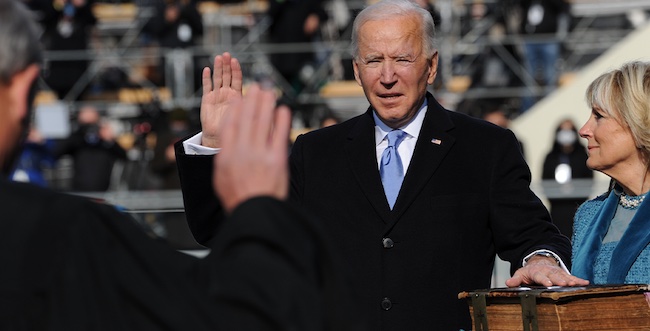 Joseph R. Biden Jr., 46th President of the United States, takes the oath of office as president on the West Front of the U.S. Capitol Building on January 20, 2021, at 11:49 a.m./Joint Congressional Committee on Inaugural Ceremonies

But sometimes, only a tried-and-true cliché will do.

“All politics is local.”

There is truth in that. In general, our everyday lives are most affected by city councils and planning commissions and school boards. Our mayors are closer to us and more important to our lives, in general, than our presidents.

Still, the last four years have shown that national politics can have a profound, deeply personal impact, too, far more than we realized.

Half the country breathed a sigh of relief at noon Wednesday. My social media feeds blew up with visceral expressions of that relief – emotional, heartfelt, teary. There was a palpable exhalation as we considered what has been lost in four years and what we hope to regain. I felt a physical sense that a burden had been lifted.

At the same time, I must remind myself that the other half of the country is crying, too, for what they lost today and for what they fear will come.

I have been around long enough to remember 16 presidential inaugurations. My fourth-grade elementary school class was watching on television when John Kennedy’s inaugural speech included the profound “ask not…” declaration. And I have watched every inauguration since, Republican and Democrat. I even watched Donald Trump’s “American carnage” speech in 2017.

I do not think we heard any immortal lines in President Biden’s speech on Wednesday. What will be remembered is his sincerity and his humanity and we will need both in the days to come. No president since Franklin Roosevelt has faced such challenges. But healing the divisions in this country will require more than presidential goodwill.

Democrat or Republican, red or blue, Trump opponent or Trump fan, our reactions to Wednesday’s events and those that will follow will be felt at a fundamental, personal level. National politics, more than ever, will feel relevant to our everyday lives.

Previous The end of the pro-Christian presidency of Donald Trump
Next ‘The nuke we survived’: American Muslims breathe sigh of relief as Biden reverses travel ban