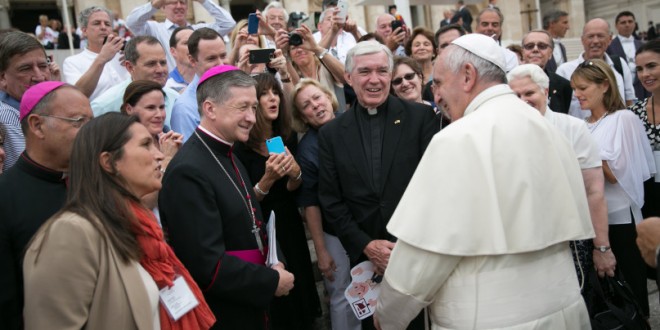 Following the general audience with Pope Francis in Rome on Sept. 2, 2015, the Holy Father met with members of the board of governors of Catholic Extension, including Archbishop Blase Cupich. Photo by Rich Kalonick

Political turmoil is a ‘cancer’ on US society says Cupich

(RNS) The morning after a Chicago rally for Donald Trump was canceled over fears of violence, the city’s Catholic archbishop warned that “enmity and animosity” are hallmarks of today’s politics and a “cancer” that is threatening the nation’s civic health.

“Our nation seems to have lost a sense of the importance of cultivating friendships as fellow citizens who, being equal, share much in common,” Archbishop Blase Cupich said in a homily Saturday morning (March 12) at Old St. Patrick’s Church.

“Instead, our politics and public discourse are often marked by enmity and animosity,” he said.

His remarks were delivered to a packed congregation that included numerous state and city political and civic leaders.

“There is an overly competitive character that defines how we relate to one another, emphasizing what divides us rather than what we share in common,” Cupich said. “And because we do not value growing together, a cancer is developing that threatens to harm us all. Positions harden, progress is stalled, and it is becoming clear that the body politic is nearing the limits of how much suffering it can endure.”

The evening before Cupich’s homily, Trump – the leading Republican presidential candidate whose fiery and boorish rhetoric have been matched by physical confrontations at his appearances – canceled a rally at the University of Illinois’ arena in downtown Chicago over security concerns.

Clashes did in fact later break out between Trump’s supporters, who have gained a reputation for intimidating tactics, and Trump opponents who have increasingly showed up at the candidate’s rallies to challenge him.

Cupich’s homily also comes days before the next round of presidential primaries on Tuesday, when Illinois will be one of several states with large delegate hauls. Trump is currently leading in most polls by double digits, and it appears that he has the support of many Catholics, just as he did in Michigan.

Cupich did not mention Trump or any of the candidates by name.

His homily reflected both his own longstanding focus on promoting greater civility in the church and in public life and the growing concerns among many religious leaders that the ugly tenor of this year’s historic campaign, particularly in the especially fierce Republican contest, could pose serious dangers to the nation’s social fabric.

Cupich also sought to highlight the underlying conditions that have created the deep resentment that some politicians are now exploiting.

He took as his frame of reference the centenary of the 1916 Easter Rising in Ireland – the reason he was at the historic, 170-year-old St. Patrick’s to celebrate Mass – a rebellion against British rule that left 2,000 casualties and marked a turning point in the bloody struggle for Irish independence.

That rebellion, the archbishop said, stemmed from the fact that part of society – Irish Catholics – were excluded, socially and economically “and were treated as sub-human” and a “lower class.”

“Social cohesion wore thin in a system corrupted by inequality, favoring the powerful and wealthy, their self-promotion and preservation to the exclusion of the weak and voiceless,” Cupich said. “The result: many people lost hope, solidarity vanished, hearts hardened and society ended up becoming infected by a cancer that harmed all.”

He quoted the famous lines in “Easter 1916” by the Irish poet William Butler Yeats, who wrote:

Too long a sacrifice
Can make a stone of the heart.

Focusing on the common good, and not “favoring some over others, including some and excluding others,” was the way forward, Cupich said.

He pointed to the experience of the Irish and other immigrants in Chicago as a model for the “restoration” of civic life, to the day’s readings from the prophet Isaiah as an inspiration for that future, and to Pope Francis’ focus on mercy as the path for Catholics in particular.

Otherwise, he said, “When the common good of all is not the aim of society’s growth, whether that be in the economy, education, civil rights or civic participation, a cancer grows that damages the whole social body.”

Previous 5 Easy Steps on How to Hijack the Republican Party: A Case Study on Trump
Next U.S. is a land of plenty, so why do millions of Americans still go hungry?