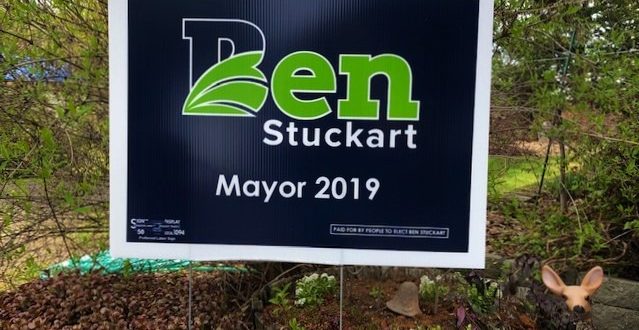 Political signs say who we vote for, not who we are

This is when we get to learn about our neighbors in surprising ways. I drive by some houses and give an approving nod, at others I throw a scowl. I’m making assumptions about both.

I’ve lived in my house on the South Hill for more than five years and only know four of my neighbors. It’s not that I’m a recluse or unfriendly. I’m busy, like everyone else on my street, and sadly we keep to ourselves.

I only get a hint into my neighbors’ morals and values this time of year, when the signs come out.

Some of my neighbors took me by surprise in 2016. This is the first year, though, in which I’m having to check my anger.

Never before have I had such a visceral response to a candidate’s name standing proudly from someone’s lawn or waving from a flag on their garage. My jaw clenches, and I fantasize about breaking the law and yanking the sign out of its spot.

It doesn’t matter which candidates are stirring these emotions — national or local — because so many of us, no matter our views, are sharing in this anger. What matters is how polarizing the political divide has become. We’ve been talking about this fracturing of our society for too long.

It seems, at least to me, that our vexation with one another peaked in 2016, then cooled somewhat, and is now back on the rise.

That’s because ideas have become extreme. A politician says or does something so farcical that the media – myself included –can’t help but cover it. In turn, media consumers react.

Extremism rarely brings out apathy. Instead, it triggers our own vehemence. We either want to rally or protest.

We need to know that the outlandish things some candidates spew are a tactic to rip us apart. When I ball my hands into fists because of my neighbor’s yard sign, that means the strategy worked. We’re further from finding common ground, because I’m blinded by my outrage.

So what do we do? How do we finally close the gap between parties?

I’ve said this before, I’ve given talks on this, but I keep failing at my own advice: I should get to know my neighbors. I should learn their names. I should engage with them and find out what we agree on. Maybe we start with the easy stuff – like how great Spokane is. I should listen to them and try to recognize what issues are driving them to support the candidate in question.

That’s a difficult task though. Listening is hard when emotions are involved.

I have to remind myself that it’s important to hear their point of view so that I can come to understand them, or at least try to.

Part of my spiritual practice is learning how to be more empathetic.

Ven. Pannyavaro is an Australian Buddhist monk who writes quite a bit on the topic. I found this line from his column “Loving-Kindness Meditation” especially meaningful regarding this issue: “The positive expression of empathy is an appreciation of other people’s good qualities or good fortune, or appreciative joy …”

People I don’t agree with have good qualities, and it’s up to me to find out what they are. It’s not fair to judge or label them based on signs they put in their yards. They deserve more than that.

Growing up, I spent a lot of time at my grandma’s house in Albuquerque. I don’t remember sitting around the table gossiping about political signs in the neighborhood. Instead, we knew one another, we knew each other’s stories. And because of that, there was a sense of togetherness. I hope to find that here somehow, even though it’s a political season.

This column was published in partnership with the Spokesman-Review.