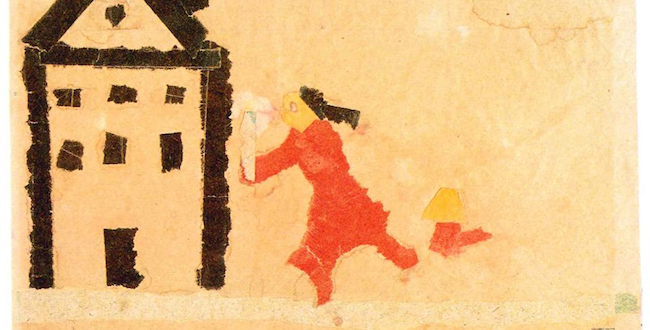 Art from the book, "I Never saw a Butterfly"

Upcoming play on Holocaust is timely story of hope

On Friday, Octo. 27, Spokane Civic Theatre is presenting a one night only reader’s theatre production of “I Never Saw Another Butterfly,” a one-act play that uses the poetry and art produced in Terezin, Czechoslovakia between 1941 and 1945 as Nazi Germany transformed the town into a ghetto and transit camp, where thousands of Jewish people were transported to concentration camps and the furnaces of Aushwitz.   The story and art work in the show come from the children of Terezin. Out of the 15,000 children under the age of 15 that passed through the ghetto, roughly 100 survived.

At its heart, “I Never Saw Another Butterfly,” is a Holocaust story.  It grows out of the horrors and sorrows in the ghettos.  While the play doesn’t skirt around the shadows, throughout the work there is a still small voice that cuts through.  There is a spark that weaves through story, giving light through hope in a time of darkness.

While the majority of the children of Terezin perished, some of the art, the poetry, and the story survived.  The works they created give us snapshots of their lives, dreams, and ultimately, their humanity.  This humanity remained in the face of deep fear and confusion in the children.  While we all have studied the Holocaust in classrooms and tales have been told in books and in movies, the presentation of poetry and art connects audiences to the realities of the Holocaust in a different way.  While the poems and art are sources of historical record, “art occupies a space where words don’t suffice; it is often a form of expression, compelled by a combination of circumstances and the artist.”

The numbers of the Holocaust are incredible, and incomprehensible.  Because of their nature and sheer size, the numbers sometimes numb people to the realities.   Six million people murdered somehow connects with our quantitative, rational brain, and loses power.  However, art gives us a connection to the humanity of the victims.  It gives a name, a personality, and a story to the numbers.  As one of the young actors in Civic’s production’s mom said “There is value in seeing the human side of history.  We can memorize facts and dates, but to really feel takes a story like Butterfly that emphasize the personal stories of the atrocities of the Holocaust.”

Almost 20 years ago, Rabbi Marvin Hier, the founder of the Simon Wiesenthal Center wrote a piece to mark the 50th anniversary of the liberation of Aushwitz in which he opined on the movement of our society to look at the Holocaust through the lens of a popular TV drama, or though movies that focus on the few righteous and heroic figures that resisted the Nazis in Germany.  These works have a tendency to promote an idea that these were the dominant figures, rather than highlighting they were few and far between.  The majority of people in the world will not visit places like Aushwitz, and so their understanding comes only through works.  Works of the dominant culture may lose the true focus of the horrors of the Holocaust, the victims.

“Given that reality, the great fear is that many of them will never be exposed to the Holocaust’s central lesson – that a civilized society voluntarily turned themselves into an evil one; that lawyers and judges lied and cheated; that teachers distinguished between Aryan and non-Aryans, teaching their students that even G-d’s “thou shalt not kill” did not apply to society’s untermenschen, the so-called sub-cultures, a name Nazis used to describe Jews, Gypsies, homosexuals, and other undesirables.”

“Butterfly” puts the child victims of the Holocaust in full view, not glorifying a singular figure, but instead, helping “personalize the Holocaust story, and making a vivid personal connection,” according to this lesson plan.

The personal connection brings us to deeper understandings of the complexities of our history and the Holocaust.  There are no easy questions, and no easy answers when experiencing the art of these children.  Elie Wiesel called the Holocaust a question within a question, as one question leads to another, that leads to another unanswerable question.  Humans are incredible beings, capable of creating art and beauty – yet humans are complex, and at times, horrific.    The complexities of the Holocaust, and of our own humanity, are brought out in “Butterfly.”   The human side of the victims whose work is the focus of the play forces the confrontation of questions about the realities of what happens when people are marginalized and singled out as less than human, only fit for removal from society.  Abuse of power, human rights, prejudice, racism, and the real-world consequences of being unaware, or simply a non-actor, become more real.

Various actors in Civic Theatre’s production have been a part of other “Butterfly” stagings throughout their careers.   While at different ages they have had different understandings of the human aspects of the show, and one of the consistent ideas that they talk about is how strings of hope have run through their work. Sometimes as the actors have worked on this show, hope has appeared as a simple task of preserving the stories of the past.  Other times, hope shows up as an amazement in the human spirit – that anybody could actually survive the Holocaust, let alone create art from their soul.   At other times the actors have reflected on how the hope of these children gives a lens to examine the world today through.  What can we learn about humans, and the nature of hope, when we scrutinize the past? Steven Anderson, who is playing Honza for the second time under the direction of Troy Nickerson reflected, “what gives me hope at the end of the day is the way those people, in the most dire of circumstances not only managed to survive, but to paint, write, to love, to create….They experienced death and persecution, not in an abstract thought or through media, but through first-hand experiences to people they knew and loved.  They were ripped from their families and homes, stripped of their dignity as human beings, living under the constant certainty of death, and yet they managed to find each other and love each other.  That blows my freaking mind when I think about it”.

While “Butterfly“ is in at its heart a Holocaust story – the voice of hope runs deep. Part of the beauty and importance of the play is the exploration of what hope means.   Reflecting upon hope, Rabi Danya Ruttenberg wrote, “If you think hope involves maintaining the belief that everything’s going to be OK, with no major damage to anyone, that we’re all going to get through this together – well, then, no, I don’t have hope.”  However, “If you think hope is something more primal, more feral, as the spark that presents us from falling into despair at a time when despair is all too tempting”, hope comes in the places where there is no space for anguish when we hold fast to the light.

Seldom a human being.

Therefore, I will wait –

Until my life’s purpose

Is fulfilled and you will come.

Though there is anguish

Deep in my soul –

What if I must search for you forever? –

I must not lose faith.

I must not lose hope.