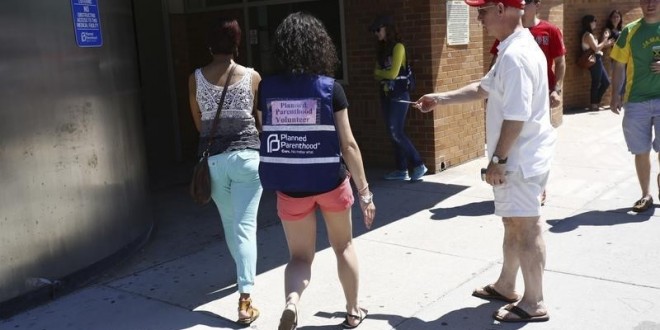 An abortion protester offers a pamphlet to a woman being escorted by a volunteer in front of a Planned Parenthood clinic in Boston, Massachusetts, June 28, 2014. REUTERS/Dominick Reuter

Planned Parenthood and the Everlasting Hatred

By Blaine Stum
On July 12, 1996, a white supremacist organization known as the Phineas Priesthood bombed the Planned Parenthood satellite clinic in Spokane Valley. The clinic was closed for a staff training, so no one was hurt; but the bomb caused $500,000 in damage and closed the clinic for a year while repairs took place.

As workers cleaned the chaos wrought by the bomb, they found a matchbook left by the perpetrators with a note referencing Psalm 139. The Psalm is meditation on God’s omnipresence and omniscience… that contains the following words:

“Do I not hate, Lord, those who hate you?
Those who rise against you, do I not loathe?
With fierce hatred I hate them,
Enemies I count as my own.”

The perpetrators wanted their victims to know their hatred of them. While Planned Parenthood in Spokane did not experience another incident like that, we know one thing is for certain: that hatred never left. Last week, a Planned Parenthood clinic in Pullman was set on fire. Investigators have ruled it arson. I call it terrorism.

To them, Planned Parenthood represents pure evil. Like the Psalmist, they count Planned Parenthood as enemies. To those of who have actually utilized their services, a vast, vast majority of which have nothing to do with abortion, the organization represents opportunity: the opportunity to access health care services we may not have been able to otherwise and an opportunity to discuss sex and reproduction without judgement or shame. Their hatred makes them see a grotesque caricature; and causes harm to innumerable people. We should not allow this hatred to go unchallenged.

Previous Europe’s refugee crisis stirs consciences, but responses vary
Next Gonzaga to screen “Pray the Devil Back to Hell” as prelude to Liberian president visit