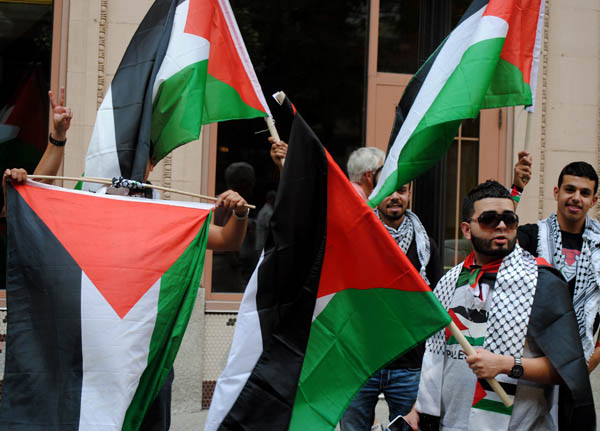 The attention of those ogling the polished, classic cars on display in downtown Spokane Thursday evening was interrupted when dozens of people waving Palestinian flags and shaking “no war” signs marched their way to the offices of Rep. Cathy McMorris Rodgers and Sen. Patty Murray to show opposition U.S. military aid supporting Israel’s bombing of civilians in Gaza.

Organized by the Peace and Justice Action League of Spokane, numerous activists — including some from as far as Oregon — took to Spokane streets chanting demands for peace. The activists were also protesting U.S. military intervention in Iraq and the U.S occupation and war in Afghanistan.

At the rally local writer Taylor Weech urged the crowd to educate themselves about government spending and to be an example to future generations.

According to the New York Times, there have been about 250 deaths in Gaza by Israeli rocket attacks and airstrikes. The United Nations estimates that about three-quarters of those were civilians and about 50 of those were children.

Weech added that she was pleased to see such a large turnout for the Spokane rally.

A small group, however, formed a counter-protest to the PJALS event, showing their support for Israel. They carried signs that read “Israel + America partners for fighting Hamas terror” and after a brief confrontation with campaigners from the PJALS crowd began chanting “Terrorism is a crime.”

Similar protests have erupted across the country in recent days, including one in Los Angeles on earlier this week in which a federal officer fired his weapon at men feeling a pro-Israel rally after using wooden poles bearing Palestinian flags to hit protesters, according to the Associated Press.

View more photos of this event on our Facebook page.

Previous New Leaf Bakery helps community by offering job training for women in poverty
Next Meat & Potatoes: What does the Bible say about prayer? 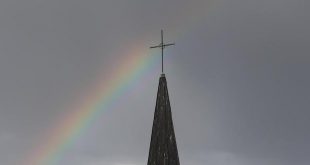