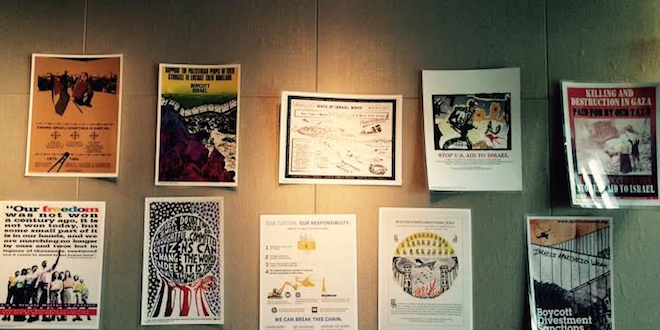 Boycotts can be effective.

A poster exhibit in the Phase 1 building at Spokane’s Washington State/Eastern Washington State campus illustrates how economic activism has worked over the years; from the Montgomery Bus Boycott in the 1950s, the anti-Apartheid movement of the 80s to today’s call by many organizations to boycott Israel.

The “Boycott! The Art of Economic Activism” display, which continues through Friday, is sponsored by the Peace and Justice Action League of Spokane (PJALS).

“A lot of time when I talk to people about Israel and Palestine, if they’re sympathetic to the idea that the occupation is a bad idea and that there are human rights violations and violations of international law, their question is always ‘so what do we do about it?,’” said Taylor Weech, who serves on the Palestine/Israel Human Rights Committee for PJALS.

Weech, who spent time in the West Bank in 2013, said people feel helpless about the situation there, which is one reason why she said PJALS wanted to bring the poster exhibit to Spokane.

She explained that the politics surrounding Israel makes it an especially sensitive subject, but she wants people to see that individuals and organizations have a long history of boycotting, “all kinds of things that are wrong and unfair and unjust. And it works.”

The display, sponsored by The American Friends Service Committee and the Center for the Study of Political Graphics, features 58 posters from more than 20 boycotts including the United Farm Workers’ grape and lettuce boycott, boycotts of corporations using sweatshops, and it closes with the Palestinian call for Boycott, Divest and Sanctions (BDS).

“The common thread that runs through all these things (boycott movements) is that racism is wrong, imperialism hurts people, and lot of people make money from those things existing and that’s not right. So I hope that’s the message that gets communicated,” Weech said.

She added that the display is timely as the BDS Movement is picking up steam in the U.S. because celebrities, business, academic institutions, and religious groups increase pressure on Israel to end Israeli occupation of Palestinian land.

In 2014, for example, the Presbyterian Church USA voted to divest from three multinational corporations said to supply Israel with products that promote violence in occupied Palestinian territories.

“After a decade of corporate engagement with Caterpillar, Hewlett-Packard, and Motorola Solutions, these companies have failed to modify their behavior and continue to profit from Israeli human rights abuses and non-peaceful pursuits,” the Rev. Walt Davis of the Israel/Palestine Mission Network, a pro-divestment group within the church, said in a Religion News Service article.

But not everyone is pleased with the BDS Movement. Organizations, like the American Jewish Committee and the Union for Reform Judaism, for instance, have said divesting from Israel undermines the Israeli-Palestinian peace process.

Nevertheless, Weech said she hopes those who see the exhibit will learn that activism isn’t about “being angry and waving signs,” but about organizing in a way that will have a powerful influence.

“I hope it flips the switch that activism can and should be as tactical and thoughtful, and as well planned, as these assaults on people’s rights are,” she said.

The exhibit has been traveling around Washington State and will be headed to Seattle next.

Previous Parenting with the Cross
Next A Case Study In Lazy Analysis: Washington Policy Center Edition