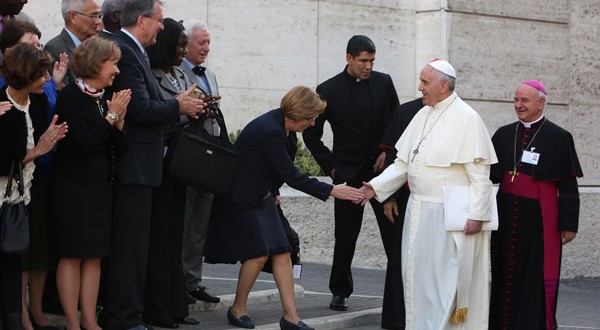 (RNS1-oct13) Pope Francis greets auditors of the extraordinary Synod of Bishops on the family as he arrives for the afternoon session at the Vatican Oct. 10. Photo courtesy of Catholic News Service

PHILADELPHIA (RNS) “The pope is coming to Philadelphia,” Mayor Michael Nutter announced at a news conference Monday (Nov. 17), after the Vatican officially confirmed what has been rumored for months — that Pope Francis will visit the city in September 2015 for the eighth World Meeting of Families.

Nutter said the visit here was part of what is anticipated to be a three-city trip to the U.S. The pope is expected to visit New York City and Washington, D.C. He has been invited to address both the U.N. and the U.S. Congress, though official acceptance of those invitations has not yet been made, said Bishop John J. McIntyre, auxiliary bishop of Philadelphia, who represented Archbishop Charles J. Chaput, who was in Rome.

Donna Crilley Farrell, executive director of the global Catholic conference on family life, said the pope’s final schedule is still being worked out, but the pontiff will be present at a Sept. 26 Festival of Families — a three-hour program of song, dance, prayer, and testimony, which will take place at the steps of the iconic Philadelphia Museum of Art. The next day, Sunday (Sept. 27), the pope will celebrate Mass in the same place.

The great front steps of the museum spill onto the city’s Benjamin Franklin Parkway, perhaps the city’s most noted public space and host to many a large crowd — though none as large as this.

“This will be the biggest event in Philadelphia’s history,” said the mayor, rattling off a list of organizations that would be enlisted to protect the pilgrims as well as the pope, including the Swiss Guard and the Vatican security forces.

Though the visit will be a logistical challenge of gargantuan proportions, Monday’s media event was as much a pep rally as press conference, as students from a half dozen of the archdiocese’s elementary and high schools filled the steps inside the museum’s great hall to cheer on the civic leaders.

The announcement of the visit is unusually early. Most papal trips are announced much closer to the actual time of the visit. But the archdiocese had petitioned the Vatican for the early announcement, McIntyre said, to give the city time to get a jump on the planning.