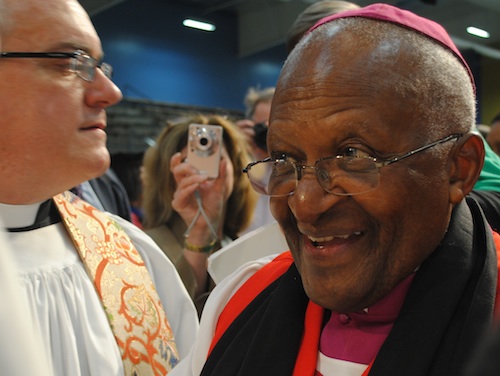 One month from now Archbishop Desmond Tutu is slated to deliver the commencement address to Gonzaga University’s graduating class. A group of alumni, however, are saying he isn’t welcome and are urging administrators to withdraw their invitation to the primate.

Patrick Kirby, who graduated from Gonzaga in 1993, said Tutu is pro-abortion rights, has made offensive statements toward Jews, supports contraception and the ordination of gay clergy and shouldn’t be honored by a Catholic institution.

Kirby, a local attorney, also noted that Tutu’s visit violates the U.S. bishop’s 2004 mandate, Catholics in Political Life, which reads, “The Catholic community and Catholic institutions should not honor those who act in defiance of our fundamental moral principles. They should not be given awards, honors or platforms, which would suggest support for their actions.”

Kirby and his wife, Maureen (a Gonzaga alumna), launched an online petition lobbying for the university to choose a different commencement speaker. Nearly 700 people worldwide have signed the petition. It will be hand-delivered to Gonzaga President Thayne McCulloh on Friday morning, though Kirby isn’t optimistic the university will recant its decision.

“I don’t have any realistic expectations that they’ll do that. The goal for me is to bring attention to it and hopefully remind administrators at Gonzaga about their Catholic identity and how far they’ve wandered away from it,” Kirby said, noting that essential Catholic values are no longer being taught in Gonzaga classrooms.

He said Catholic institutions all across the U.S. are choosing popularity over morality. Gonzaga will present Tutu with an honorary Doctor of Laws degree at graduation. That’s the same honor President Barack Obama received from Notre Dame in 2009. Earlier this year Marquette University hired former U.S. Senator Russ Feingold as a visiting professor. Feingold has been a long-time abortion rights advocate. Kirby said these are all examples of Catholic universities forfeiting their values.

“It’s not just Gonzaga. It’s more widespread. It’s a problem with Catholic universities wandering too far away from their core and the reasons why they were established,” Kirby said.

He said it sends an unclear message to students.

“On one hand Gonzaga has a mission statement that says its purpose is to provide students with a humanistic, Catholic, Jesuit education, which allows them to create a lifetime of service using the values that Christ taught us. And then we have somebody who is standing in front of them on graduation, when they’re going off on this venture, who has taken positions publicly which are diametrically opposite to the very fundamental teachings of the church on faith and morals,’ Kirby said. “It’s a confusing and hypocritical message.”

Gonzaga administrators are not commenting on the petition. In a February press release, however, McCulloh said Tutu was “a living exemplar of Gonzaga’s historic commitment to the ideals of equality and a free society as a Catholic, Jesuit and humanistic University.”

“We are honored and humbled that Archbishop Tutu has chosen to be with us and our graduates for commencement. He is certainly among the most prominent moral icons of our time,” he said.

McCulloh especially praised Tutu for his work against South African apartheid, for which Tutu later won a Nobel Peace Prize for.

The petition will also be delivered to Blase Cupich, bishop of the Catholic Diocese of Spokane, who has not commented on Tutu’s upcoming visit.

Base on this statement, I would agree as far as the letter of the law goes, but I would like to hear the School’s response:

“Kirby, a local attorney, also noted that Tutu’s visit violates the U.S. bishop’s 2004 mandate, Catholics in Political Life, which reads, “The Catholic community and Catholic institutions should not honor those who act in defiance of our fundamental moral principles. They should not be given awards, honors or platforms, which would suggest support for their actions.”

I think many donors to such an institution would be concerned about such matters, if they were supporters of the vision, mission and values. Seems fair to protest if the money is being used to deviate away from that core direction.

On the flip side, we have to be open to others and be hospitable with even those we don’t agree with on all matters. Seems like a University is one of the main places that should take place. So why straight jacket yourselves as an institution?

I agree that we should be charitable and hospitable, but when it comes to honoring those who oppose fundamental Catholic teachings on issues of faith and morals, isn’t it more charitable to protect the souls of those in Gonzaga’s care?

As a member of the pro-life community wrote:

Let’s suppose, as a member of the pro-life community suggested, that we (Gonzaga) invited a prominent South African pro-life activist to come and speak at the commencement at the university, or to give a talk at the law school. This person is a leading force in the pro-life movement in South Africa and has been involved in the pro-life movement for the right reason — to uphold the inherent dignity of the human person grounded in the right to life that is each person’s due as a person made in the image of God. So far, so good.

But what if it came out that this person, who is a devout member of a church that had been supportive of apartheid, had been a strong apartheid supporter back when that policy had been in place? She had spoken out in favor of apartheid as being part of God’s plan for the races, that the separation of the races was predestinated, and that the Bible supported such a policy. Would the university and/or the law school ever invite such a person to come speak here?

No, that would simply never happen. And even if it did, once the person’s support for apartheid became public, the university and/or law school would not only rescind the invitation, they would apologize for ever having invited the person to come speak to begin with.

What we are facing is the flip side of this situation. We have a man coming to speak to the campus who has an admirable record — a heroic record — of standing against the evil of apartheid. But he embraces an evil of at least as great a magnitude — and arguably a greater magnitude — which is the killing of innocent unborn human beings. The evil of racial segregation has been replaced with the evil of extermination. And let’s not kid ourselves. It is not wealthy Afrikaners having abortions for the most part. It isn’t the English professionals in Johannesburg and Pretoria and Cape Town having abortions for the most part. It is black people, economically marginalized black people, who are having abortions. This is simply eugenics by another name, accomplished not via sterilization but by slaughter.

I respect the prolife argument but not anonymously…seems to contradict the boldness of the position.