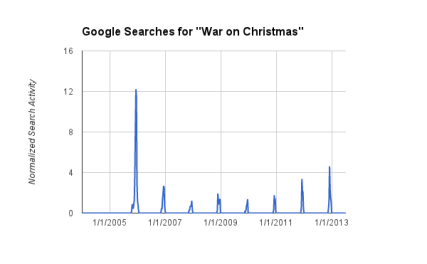 The frequency of Google searches for “war on Christmas.” Data source: Google Correlate. Graph created by Tobin Grant for RNS.

Peace! Why you can expect a ceasefire on the ‘War on Christmas’ until Thanksgiving 2014

12:01 a.m. The annual winter siege known as the “War on Christmas” is over, for now. For the next 11 months, the holiday will be able to exist in peace.

The new ceasefire is unlikely to be permanent, however. The war is expected to return by December 1, 2014, when slow news days and the need for donations will likely cause the fighting to resume.

If next year plays out like days of old (OK, just since 2007), we should expect interest in the war to begin just as Thanksgiving ends and shopping for Christmas begins in earnest.

According to data from Google Correlate, interest in the “War on Christmas” peaks at the same time we start putting up Christmas lights. It does not begin until the first week in December, increases the second, and then drops off, as it is clear that, once again, Christmas will survive.

Which states show the most interest in the war? States with the greatest interest in the war include Oklahoma, West Virginia, Indiana, and Oregon (though Oregon may be more concerned about the threat to Christmas trees from water mold). The same states that tend to search for “hell in a hand basket” and “old-fashioned.”

@TobinGrant blogs for Religion News Service at Corner of Church and State, a data-driven conversation on religion and politics. He is a political science professor at Southern Illinois University and associate editor of the Journal for the Scientific Study of Religion.

Previous Only Kwanzaa public radio program in the U.S. continues its tradition after 20 years
Next Interfaith work has a history in Spokane, must continue