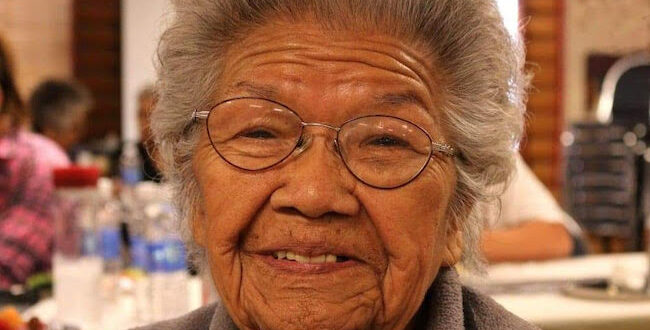 Though she may be gone, Spokane tribal elder Pauline Flett’s legacy in preserving the Salish language, which is used by Indigenous people of the Pacific Northwest Coast, lives on in those who she has inspired throughout her time as a teacher.

Her influence can be found at Spokane Language House and Salish School of Spokane where the young and old can get in-touch with their Indigenous roots and learn to become fluent speakers in their ancestral language. Only a handful of fluent speakers remain.

Sulustu “Barry” Moses, executive director of Spokane Language House, said he knew Flett since he was a child and was raised to see her as his auntie, describing her as always being encouraging, warm and friendly toward him.

He said from the 1960s all the way to the end of Flett’s life, she was constantly working on Salish where she recorded thousands of hours of elders telling stories, giving oral histories and personal accounts in the language and transcribed each tape by hand before translating them into English. Even in her final years, she worked as a consultant for the Spokane Tribe language program, answering questions members had about the language.

Moses did not start learning the language until 1996 when he enrolled in Flett’s Salish language course at Eastern Washington University (EWU) while studying teacher education. Despite growing up with grandparents who spoke Salish and understanding the language as part of his heritage, Moses did not have an awareness of the Salish language crisis nor the concept of endangered languages disappearing from the world until he started taking Flett’s course.

“I didn’t really realize all of that, it was just something that I was surrounded with as a kid and I always heard Salish around me, although it was never spoken directly to me,” Moses said.

The grandparents spoke Salish to each other, but always spoke to their grandchildren in English which Moses said was the legacy of boarding schools where they were abused as children for speaking their language.

Even though he thought the Salish language was beautiful and grew up around it, Flett became the first person in his life, he said in a substantial way, to speak Salish to him and would change his life.

Sometime after graduating from EWU, Moses became a Salish teacher by accident while working at Medicine Wheel Academy in 2001, when the Salish teacher at the school had to resign after falling ill and the school didn’t have the budget to replace him.  The principal came to Moses one day and told him he was the new Salish teacher.

However, Moses had only taken Flett’s course and didn’t have a curriculum or an idea of what to teach. Thankfully, his grandmother, who was also a fluent Salish speaker, talked to him for two-three hours every Sunday night and would tell him everything he had to teach that week.

Despite coming late to the game and not being a fluent speaker from his childhood, Moses described how Flett’s legacy and work overlaps his own through him establishing Spokane Language House in 2016. He said they are in the process of developing a program that seeks to train new adult fluent speakers in the language.

Moses said these fluent speakers are created by using the materials Flett left in the archives and that her work is the main body of Spokane Language House’s process, taking her work to the next generation and creating new speakers in the future.

“If the Spokane language has any future at all it is because of Pauline, and it’s because of the work that she did to document the language,” he said.

The hope is, he said, that if they are able to create new fluent speakers through a programmatic method that, eventually, it will reach a certain critical mass that people will be speaking the language to their children and potentially their grandchildren.

LaRae Wiley, co-founder of Salish School of Spokane, described how she met Flett in the summer of 2000 and was interested in learning about the Salish language, but did not know much about it due to her not growing up with it.

After being encouraged by the late Peter Campbell, who was a counselor for the American Indian Studies Department at EWU, Wiley got in contact with Flett for an independent study during the summer in Wellpinit where they met several times a week to work on Salish.  It was there that Wiley was introduced to the language, finding its beauty and falling in love with it.

“I fell in love with the language, but I think part of it was that I was able to be inspired by Pauline through her kindness,” she said. “Some people aren’t natural teachers and she was a natural teacher, and I think the ability to be kind and encouraging while teaching language is a special gift, and she had that.”

Wiley described Flett as a fluent speaker who was knowledgeable on language and culture, as well as a kind and patient teacher who was funny and dedicated her time to the Salish language at not only the language program but also at home.

One aspect that Wiley appreciated about her was that she would “play with language” where she did a bunch of childrens’ songs in Salish and she enjoyed making them knowing that kids in elementary grades will be singing those songs.  This would influence Wiley, her teaching and she would later do in life.

Flett’s passion and commitment to the Salish language has inspired generations to continue learning it and impacted those who had taken her course when she was a teacher at EWU, where hearing the language, stories and feeling the connection to their ancestors was powerful and made a difference in their lives, Wiley said.

It was because of Flett that Wiley eventually became a Salish teacher at EWU, and from Flett’s teaching, as well as the tribal language program at Wellpinit, that eventually led to the founding of the Salish School in 2010 that serves over 50 students between the ages of 3 and 16-years-old who learn the language and other aspects of Native American culture.

The school’s mission seeks to create fluent speakers of the Interior Salish languages by teaching children and working with parents to use Salish in their daily lives.

“I’ve had a couple different elders who really impacted my life and I don’t know if I would even be doing language if I hadn’t been able to connect with Pauline,” Wiley said.

She said that she thinks the work Flett has done will continue to impact lots of generations of Native people and continuing to share knowledge through the generations will be her legacy.

“[Flett] was such a great advocate for the language and the culture of Native people and that she was willing to share everything that she knew,” she said. “I think she realized that you have to share it if you know it. It’s one thing to know it, but it’s another thing to actively share it with other people so that others can learn.”

Flett died of natural causes on April 13 this year. She was 93.