Paul hopes for a win in Washington

Ron Paul isn't winning in the primary states, but on Friday at the Spokane Convention Centerhe said he's cautiously optimistic he'll have success here in Washington.

Supporters, both republican and democrat, nearly filled the center to hear him speak about why he should become the next president.

He offered an invocation before Paul addressed the crowd.

That prayer was about as religious as Paul's rally got, unlike Rick Santorum's rally on Thursday, which was held at an evangelical church. Paul touched on religion briefly when he said citizen's private lives, including their religious beliefs and practices, aren't the government's business.

“Be what religion you want to be or don't want to be, the government's not supposed to interfere. But when it comes to personal liberty all of a sudden these busybodies want to tell us exactly how to live our lives,” he said. “This is difficult for some, but you have to be tolerant of others.” 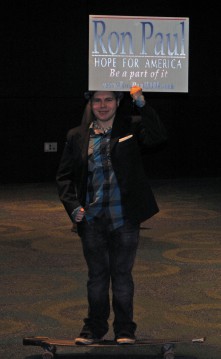 He said the government should only step in when a private citizen commits fraud, abuses someone, steals or harms another person. Paul also discussed his plans to repeal the 16thAmendment (income tax) and the Federal Reserve. He also spoke about his goal to bring all military troops home, noting America has no right to tell other countries how their citizens should live. Foreign policy, he said, needs to be changed. He plans to campaign in Idaho and Alaska before voters take to the polls on Super Tuesday. Spokane GOPprecinctcaucuseswill be held Saturday at 10 a.m.

Previous VIDEO: Santorum rallies conservative Spokane voters
Next Compassion is calling all angels, even the ‘others’