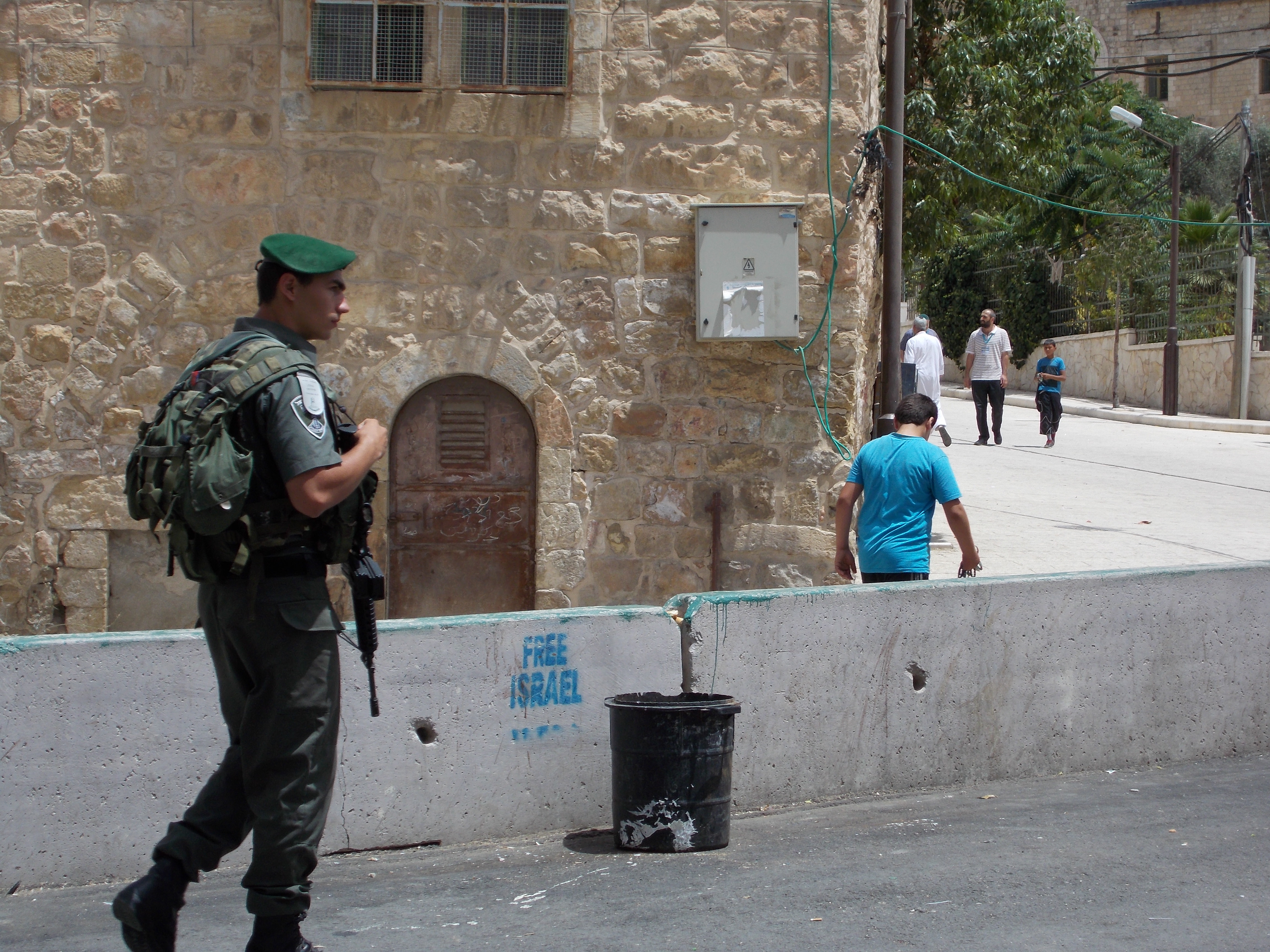 This is the second in a two-part series. Read part one here.

Jonathan Cook took us on a tour of the newly finished museum dedicated to Hebron’s Jewish heritage, which focuses on various acts of violence done to Jews there and their triumph over them, which in his narrative, lead to the reality today. In his words, Hebron is a Jewish city being “occupied” by 200,000 Arab Palestinians. This objectively absurd claim is backed up in his version of events by the geographic anomaly presented here. As Cook shared with us, almost all settlement communities are built up around the outside of existing villages, towns and cities, but Hebron’s have expanded into the shape of a donut — starting with the “donut hole” in the center of town bordering the important religious site The Tomb of the Patriarchs. The marketplace itself was invaded and taken by the small community backed by the army. The few Arab vendors who remain today do so as an act of symbolic resistance and at great personal risk.

The absurdly violent acts which are commonplace in Hebron are justified by religious zealotry. The idea that God has chosen these specific people to live on this specific land is used to justify murder, harassment and injury of children on their way to school, rampant vandalism and random violence, including throwing of acid and chunks of rubble down onto the vendors below the settlement’s “reclaimed” housing. Wilder speaks for the community when he says, “God says to, ‘Make war for this land. Conquer this land.’ And so I do.” This so-called holy war has resulted in a huge influx of soldiers (three per settler in Hebron for a total of about 2,500) and an escalation of violence.

In Hebron, we visited The Tomb of the Patriarchs where Abraham, Isaac, Rebecca, Jacob and Leah are buried. It is now divided in an unfortunate metaphor for the entire region. Isaac’s family’s tomb resides on one side of the main building in the Ibrahimi Mosque and visiting pilgrims go through a security checkpoint to enter. Jacob’s family rests in the other half of the structure, which has been converted to a synagogue. Jews, Christians and Muslims alike peer into a cage-like structure visible from both sides but surrounded by bulletproof glass to see the mouth of the cave where Abraham is buried.

This political situation, often described as ‘intractable’ due to religious and political extremism, racism, greed, and historical violence certainly does look dim from Hebron. The good news is that this spring, 33 people (including me) witnessed these acts and met with these people and then returned to the U.S., where we can share what we’ve seen with our communities, congregations, families and friends. Thousands more have been on some type of political pilgrimage to the region over recent years. The even better news is that people of conscience all over the world are standing up against what can only be described as apartheid in the Holy Land. During 11 days alone, I was able to meet inspirational Arab, Jewish, Muslim, Christian, atheist, feminist, anarchist and every other stripe of activists (not to mention the children) and they helped me to see the possibility for peace.

Groups like Jewish-led New Profile and the weekly Women in Black protest show Israelis that not all citizens and not all Jews agree with the militaristic state agenda. People like Cook and his wife, Sally Azzam-Cook create communication conduits among and outside of Israeli society, using human connection to spark change. Religious leaders in organizations like Sabeel and Kairos Palestine see the mandate in their religious texts to seek equality and justice for all people and heed it. Human rights organizations and grassroots groups like Palestinians for Dignity, Al-Haq, and Youth Against Settlements do important on-the-ground organizing, educating and agitating for human rights.

American churches are leading the way where politicians have refused on this issue. Various Mennonite, Quaker, Lutheran, Unitarian Universalist, Methodist and Presbyterian conferences have all passed various resolutions supporting the BDS (boycott, divest and sanction) movement and begun taking action to back up their verbal support. Groups like Interfaith Peace-Builders and Christian Peacemaker Teams bring Americans to experience the conflict firsthand and provide tangible action steps to take upon returning. As a non-religious person, I’ve been very glad to meet so many committed people who share a more broad and liberating notion of their theology, who feel a responsibility to honor their God by seeking justice and peace on Earth. Having seen the beauty of the Holy Land in person, I feel this responsibility too and hope to share what I have seen and learned with others and to continue learning more for as long as I can.

Taylor Weech is a local journalist and organizer. She produces a weekly radio show called Praxis on KYRS. Read more about her trip with Interfaith Peace-Builders on her blog.