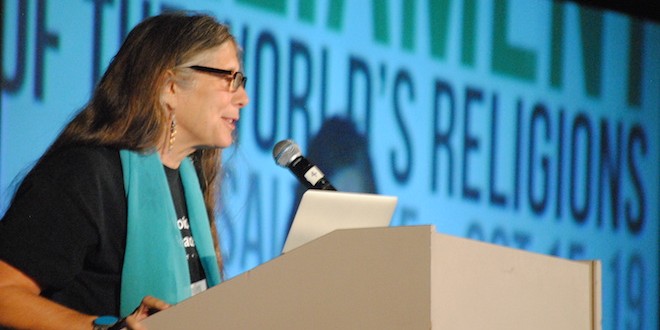 SALT LAKE CITY — Violence is a thread in sacred texts, but panelists Saturday at the Parliament of the World’s Religions said context, tradition and reason outweigh the brutality that often divides people in the name of religion.

British author Karen Armstrong said religious texts, for some, have become a scapegoat for violence.

“We need to do some work, we religious people,” she said, “if these texts are being used and abused to justify these actions.”

She said people need to find creative ways to show their faith is peaceful and compassionate and argued that extremists don’t just read a verse and immediately go harm someone.

“If people really read these violent passages and raced out to commit these autarchies, then the world would be full of Christians who loved their enemies and turned the other cheek when taxed,” she said.

People join violent groups because they feel their lives are lacking meaning, she said.

Religious people can counter this, Armstrong said, by following the words of St. Thomas Aquinas who said Scripture is an activity. All Scriptures, he said, must teach charity.

“You cannot take texts literally because they’re so contradictory in the Bible, ‘Love your enemy, go slaughter them wherever you find them,’’ she said, explaining that people must read Scripture through an allegorical, metaphorical and mystical lens.

She said Scriptures are violent because people are violent, and if a peaceful, non-violent world is desired people must welcome the stranger and embrace the Golden Rule message found in all religious texts.

Jonathan Brown, the Alwaleed bin Talal chair of Islamic Civilization in the School of Foreign Service at Georgetown University, and a practicing Muslim, spoke about the teaching of the Qu’ran. He said many of the verses that are used to endorse violence are taken out of historical and traditional context.

He  agreed with Armstrong and said texts shouldn’t be taken literally, and said humans are naturally flawed when attempting to interpret Scriptures because they have their own agendas and moral burdens.

He summed up Islamic teachings. Fighting, Brown said, is OK only in certain situations. Offensive jihad is permitted in self defense and when to counter injustices.

When asked by a member of the audience, he said all Muslim scholars condemn ISIS and that ISIS does not represent Islam.

Rabbi Lynn Gottlieb, one of the first women to become a rabbi in Jewish history, also spoke on the panel, “Kill them (Qu’ran), Do Not Spare Them (Torah), and Cast Them Into Everlasting Fire (New Testament): Context of Difficult Religious Texts.” She said even though the Torah says to show no mercy, rabbinic tradition turns away from violence.

“We have to give up the male notion of self-defense and support non-violent tools such as boycotts, divestments and sanctions,” she said. “We have to make a choice. We have to use our traditions.”

Rather than reading into literal verses, she said people of faith need to honor human dignity.

“That is the road to peace,” she said.

YWCA Spokane will be hosting its next Pathways Forward roundtable discussion later this month to discuss children, caregivers, and the traumas brought on by the global COVID-19 pandemic.