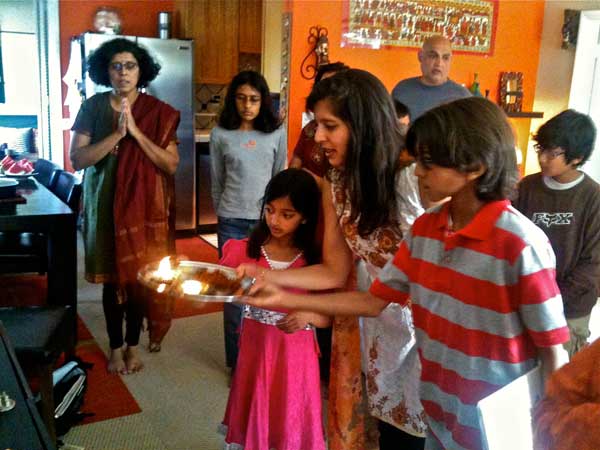 Parents take teaching Hinduism into their own hands

Children are usually the primary complainers about Sunday school, but when Mudita Bahadur started looking for excuses not to take her children to the Hindu temple on Sunday, she knew she had to make a change.

“One, it's dogmatic and two, it's inconvenient,” she said of the Hindu classes held a 45-minute drive away from her home in Santa Monica, Calif.

Bahadur decided to take her children's religious education into her own hands. For the past three years, she and other Indian parents have been teaching their children about religion in each other's living rooms.

The do-it-yourself approach permits them to instill pride and progressive values in a traditional manner, the parents say.

Today, 10 families rotate hosting the Santa Monica Bal Kendra (children's organization) one Sunday a month from 10 to noon. The children, ages 6 to 12, sit on the living room floor in a circle with a handful of parents surrounding them.

After Bahadur led the circle in Sanskrit prayers at a recent meeting, the host, Berkeley Sanjay, gave a lesson on the caste system. He directed the students to pick up their shoes, designating them as shoe cleaners — a category of untouchables — and move to the edge of the room. One leaned over the couch to get closer to her mom, who was playing the role of Brahmin, or priest.

Sanjay forced the girl to step away. “Is this allowed?” he asked. “Can people holding onto shoes touch the Brahmin?”

After discussing how and why the caste system came to be, Sanjay asked the kids how they felt. Separated, frustrated, abandoned, they answered.

“People who are actually in that position probably feel much deeper,” 12-year-old Adya Mohanty, Sanjay's daughter, said. She had learned about caste from a textbook in her sixth grade class, but she appreciated her father's hands-on lesson. “Here, we considered whether it was right or wrong.”

At a Hindu temple, the religious leaders might be defensive about an issue like caste, said Manjusha Kulkarni, the executive director of South Asian Network and one of more progressive parents in the group.

Kulkarni says she never enrolled her daughters in a formal religious education program because she had bad experiences at temples. One priest, for instance, told her that women shouldn't work outside the home, Kulkarni recalls. After Hurricane Katrina, another priest dismissed her five-year-old daughter's questions about suffering.

“Here's a child asking a question that's really fundamental to religion — why do bad things happen to good people? And he's not taking it seriously at all,” Kulkarni said.

The Bal Kendra group also attracted Kulkarni because it reminded her of the group she grew up with in Montgomery, Ala. “The reason we had to form it is because there wasn't anything — there wasn't an institution to go to,” she said of her childhood group.

Even today, temples are found only in large cities with a high concentration of Indian Americans, said Gordon Melton, a religion scholar at the University of California, Santa Barbara.

“In the Christian church being part of a worshiping community and regularly attending worship is part of the demands of the faith,” he said. At Hindu temples, “you show up, you do your little ritual and then you leave.”

The religious education program that Bahadur didn't like, for instance, is an American phenomenon — and it cannot expand fast enough, according to its director, Swami Ishwarananda of the Chinmaya Mission of Los Angeles.

“Sunday school is a very good format, and I'm sure that most of the kids here are aware of their own friends going,” he said.

The Los Angeles mission educates 1,300 students, age 4 to 18, at its Tustin headquarters in Orange County and at six satellite locations every Sunday. Still, there's a waiting list for the classes.

Ishwarananda dismisses Bahadur's concern that the program is dogmatic. “Every culture has its pluses and minuses,” he said.

Bahadur says formal religious education runs against the traditions of Hinduism. “It's a very individual religion and when you start getting into these mass organizations, there has to be something that becomes more rule oriented in order to keep things organized,” she said.

Bahadur wants her 9- and 11-year-old children to take pride in their culture, but not uncritically.

As the Bal Kendra's discussion of caste concluded, Bahadur pointed out that some use the Hindu concept of karma — which says that past lifetimes determine one's dharma or place in society– to justify caste. “What can we take from [these concepts] that doesn't have to do with the caste system?” Bahadur asked, proposing the question for the next month's discussion.

The point of having such discussions in religious education, she said, is to encourage “the kids to always ask questions and not just swallow it whole.”

Previous Albert Einstein
Next Further up and further in