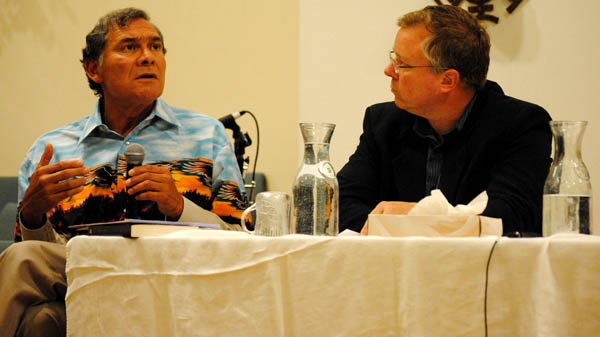 Panelists agreed at a forum Wednesday night that the death penalty is morally reprehensible and should be done away with in Washington state and the rest of the country.

The Rev. Todd Eklof, of The Unitarian Univesralist Church of Spokane, said killing people to teach that killing is wrong, is senseless.

“As a person of faith, I cannot tolerate it,” he said.

He said many religious groups oppose the death penalty, including Catholics, Methodists, the United Church of Christ and Unitarians.

“A lot of religious folks are against it. It’s surprising to me that it’s only a mild feeling, not something their passionate about,” Eklof said.

He said Christians, in particular, should be outraged by the death penalty since, “Jesus was a victim of capital punishment.”

“The very symbol of the religion is state execution,” he said.

Quoting Matthew 18, Eklof said the crux of Christianity is forgiveness and urged those in the crowd (about 20 people) to take the Bible’s message of compassion and forgiveness to the streets.

Buell Hollister, whose son was murdered in 1983, also spoke on the panel. He said his family didn’t want their son’s killer to be put to death.

“We were against anything that would take another person’s life,” he said. “We were concerned about the family of the person that committed this crime. We knew that they were experiencing grief and anxiety just like we were.”

Victoria Thorpe, author of “Cages“, told the story of her sister, Kerry Lyn Dalton, who is currently serving on death row in California. Many believe Dalton is innocent, as she was sentenced strictly on hearsay.

“Even if I did learn that my sister committed this crime, I wouldn’t want her tortured in a cage, waiting to be killed, like she is now,” she said.

Hollister, who has worked with inmates over the years, said people are capable of change. He noted, though, that for convicts to truly turn their  lives around the prison system needs to change.

“What happens in prison is destructive to humanity,” he said. “We need to humanize our prisons and be selective about who we put in prison.”

Raymond Reyes, associate mission vice president for intercultural relations at Gonzaga University, served as the forum’s moderator. He said the nation needs to abolish the death penalty, and then revamp the prison system so that inmates get help to rebuild their lives.

“How can we expect human beings to change in that environment?,” he asked. “Why can’t our penitentiaries be places of redemption? Of transformation?”

Thorpe closed the discussion by saying all of humanity is better when people help one another by seeking justice, rather than revenge.

PJALS will continue honoring Amnesty's Week of Action on Death Penalty Abolition by showing “Conviction” at 7 p.m. on Monday at Gonzaga University School of Law.