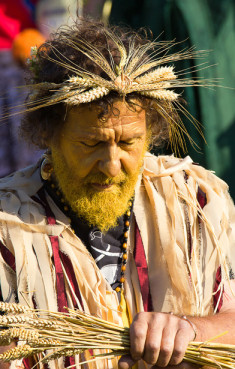 (RNS1-AUG. 1) Lammas, or Lughnasadh, is a festival of the wheat harvest and is one of the eight sabbats in the Neopagan Wheel of the Year. For use with RNS-PAGAN-LAMMAS transmitted Aug. 1, 2014. Creative Commons image by Graham Huntley

It happens to Catholics, evangelicals, Jews, and yes, pagans, too.

Second-generation pagans — those whose parents were converts to pagan spirituality — are a lot like their peers in other faiths. They often do spirituality their own way. Or not at all.

“Born-to-it pagans just are who we are,” said Angela Roberts Reeder, 43, whose parents were involved in ceremonial magic when she was young.

This week, Reeder said she might continue the tradition by joining a public celebration for the first harvest festival of Lughnasa, also called Lammas, at a Washington, D.C., temple.

“Today, it’s so much easier to be openly pagan than 20 or 30 years ago” when converts often faced strong disapproval by family and society when they came out of the “broom closet,” so to speak, Reeder said.

Where the first generation had to struggle to find teachers, books and like-minded pagans, the Internet now offers a wide knowledge stream and infinite meet-up possibilities.

Still, the tendency of youth to rebel against their upbringing and to hunt for something new is ageless.

A 2007 study by LifeWay Research found that among the 65 percent of millennials who call themselves Christians many are no longer observant. More than two in three said they rarely or never pray with others, attend worship services or read the Bible or sacred texts.

It may be even more challenging to hand down paganism’s free-form spirituality from one generation to the next.

An author and a scholar teamed up last year to survey more than 160 second-generation pagans to see how they identify as adults. Laura Wildman-Hanlon, a Wiccan priestess in Amherst, Mass., and author of “Celebrating the Pagan Soul,” and Julie Fennell, an assistant professor of sociology at Gallaudet University in Washington D.C., presented their research at a sociology conference last fall.

They found that 49 percent of second-generation pagans had shifted to identifying as “nones” — people who say they have no particular religious identity — a group that now represents 20 percent of Americans overall and more than a third of millennials.

Wildman-Hanlon described a rise in “cultural paganism — Wiccan wannabes who have read a book and been to a ritual or two.”

However, Fennell said, they also found that those who grew up with “seriously involved” pagan parents were more likely to stay with some form of a pagan spirituality.

Fennell, 33, found her own pagan identity in her college years — to her non-pagan parents’ dismay.

Now a “devout Wiccan,” she expects to celebrate Lammas this weekend munching on an anatomically correct gingerbread man. The cookie fits with the grain harvest theme of the holiday and the pagan view that is “actively positive about sexuality. Most of the world’s religions are not so cool with that,” Fennell said.

“I can’t think of anything in all of paganism where everyone would agree on what you are supposed to do for a celebration,” Fennell said. “There’s no one ‘handbook’ and even if there were, you might choose to ignore it. I love my disorganized religion.”

Mark Brown, 44, of St. Louis, whose father would speak of the “Old Ones” when Brown was young, said people grow up to discover paganism “either fits them or it doesn’t and they move on.”

“Our traditions make you responsible for your own path, your own learning. That’s a lot of hard work and some people decide it’s not for them,” said Brown. He’s a high priest in a Reconstructionist Celt tradition — an earth-centered spirituality that celebrates Celtic divinities.

Diana Rice, 58, grew up loving anything with magic but never met a pagan until she was in her 20s. In the late 1980s, she enrolled in a class in Chapel Hill, N.C., on “moon mysteries.” She and some fellow students organized a group just as American interest in paganism began to boom in the late 1990s.

Nearly 3 million people now identify with those new religious movements under the overall umbrella of paganism or neo-paganism. They may self-identify as witches, Wiccan, Druid, heathen or follow any polytheistic or pantheistic tradition that holds the earth as sacred and sees masculine and feminine forms of divinity.

Rice’s group, The Fringe, or The Lunatic Fringe, lasted 16 years, peaking when there would be 50 to 60 people at rituals, before fading out in 2005.

“We would do cutting-edge stuff, like interacting with people embodying divine beings, to provoke thought and improve yourself. We didn’t just come to a spot and wave our arms around. It wasn’t just church in a circle, “ Rice recalled.

Katrina Messenger, 58, a high priestess in a pagan group she named the Order of the Elemental Mysteries, blamed the ‘90s New Age boom for the generation gap in knowledge and participation.

Paganism has “gotten so big so fast, it outstrips our ability to pass on lore,” said Messenger. “Younger pagans are less familiar with even basic fairy tales like ‘Hansel and Gretel.’ If they know a fairy tale or myth, they know the Disney version unless maybe there’s a graphic novel about it,” said Messenger.

So, to educate pagans of any age, Messenger established her Reflections Mystery School and she organizes public rituals with Connect DC. She formed the group in 1999 to bring “magic, mystery and celebration” to the nation’s capital. Some rituals are done in public parks. Others are held in a room adjacent to her home, where there’s an altar that is redecorated each season, and a labyrinth path is cut into the front lawn.

Messenger believes first generation pagans should welcome newcomers, however rambunctious. “You can’t be like, ‘Hey kids, get off my lawn!’”