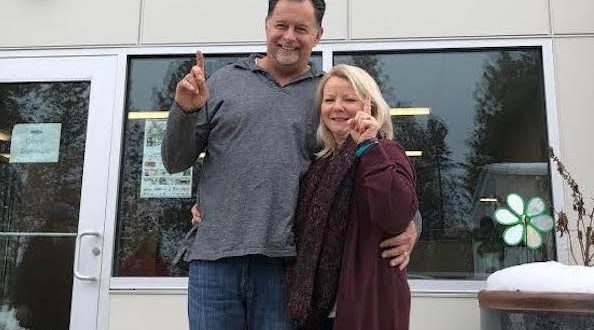 Almost 30 years ago, Mike and Lisa Fairburn bought some lawn mowers and started a business after work to help bring in money for a family member who needed extra income. Mike Fairburn was working another full-time job at a different company and Lisa Fairburn was working as a school counselor, but nevertheless, she would pick him up in their truck after work and they would go mow lawns until dark for some extra cash.

The two had a feeling that something was special about this tiny business they had begun. Both devout Christians, the Fairburns knew that something felt right about what they were doing.

So they dropped everything and went all-in.

“I really felt that the Lord was telling me, ‘This is for you,’ Mike Fairburn said. “So I went back to my boss. I loved my boss, he was so good to me. But I said, ‘I think I’m going out on my own next year.’”

Living Water Lawn & Tree Care arose from that venture, and has since grown into one of the largest businesses of its kind, serving thousands of customers in Spokane, North Idaho, and the surrounding area. They recently moved into a brand-new building near Colbert, and have continued to expand the services they provide while maintaining the same personal touch of a small business, with the Fairburns still at the helm.

“It’s the best thing I’ve ever backed into,” Mike Fairburn said. “I wish everything I’ve backed into went as well.”

The development of the Fairburns’ business seems intrinsically linked to their continued openness about their Christian faith in their business. One can see it on the Scripture on their brochures and vehicles, or in a statement on the website that states they, “conduct business in a manner consistent with the owners’ faith in Jesus Christ and his teachings.” Their appeal seems to stem directly from the values the Fairburns have touted since the inception of Living Water.

But for the Fairburns, this choice was less about business and more about remaining true to themselves.

“In the beginning, it was just who we were,” Mike Fairburn said. “We were both fairly young in our faith [when beginning the business], but it was very much the center of our lives.”

The name originates from a New Testament story of Jesus and the Samaritan woman at the well in the Book of John: “If you knew the gift of God and who it is that asks you for a drink, you would have asked him and he would have given you living water,” says Christ to the woman in

Mike Fairburn says they came up with the name very early in their business, and have stuck with it since. The two admittedly never considered shying away from their faith in their marketing.

The Fairburns’ relationship has formed the backbone of their work since its inception, and that doesn’t seem likely to change any time soon. The two co-founders see the strength of longevity of their relationship reflected in the success of their biggest venture together.

“I picked the best partner in life,” Mike Fairburn said. “Lisa is a warrior. If this was the olden days, they would have to drag her off the battlefield on her shield.”

Running a business in such a faith-oriented way always poses challenges, but the Fairburns were prepared for that when they first began.

“Starting early on, I knew there’d be some actual negatives,” he said. “For some people it turns them off. The fact is, I’ve lost some commercial work because of it.”

But he can also remember instances where customers were much more enthusiastic about doing business with them because they are Christians.

Lamar Keener, the publisher of the Northwest Christian Business Directory and CEO of Selah Media Group, which publishes hundreds of similar directories, agrees that businesses with faith-oriented values can gain some meaningful benefits from their status in the community. He attributed much of the success of the numerous faith-based directories he has published over the last 30 years to two reasons.

“Consumers seek to do business with someone they can trust, and they feel that a business willing to identify as a Christian-owned business in a Christian directory is exactly that,” he said. “Consumers like to support businesses that share their values.”

Prioritizing and building on relationships with customers has always been a constant for the Fairburns. For a company with a majority of residential customers, it’s a key to proliferating business, but it also provides them with a sense of satisfaction.

“I just love the work. I love the people in the building and I love the customers. It keeps me wanting to be here,” Mike Fairburn said.

In 30 years, the Fairburns have also committed to cultivating a work environment that takes their values seriously. They don’t see any reason to compromise on that.

“People want to work at a place where they’re valued, and that’s probably why we’ll never be a ginormous business,” he added, comparing the group of people he employs to a large family.

Whatever happens in the future, the Fairburns are satisfied with what they’ve built; they take pride in their business as an extension of their identity, a role in the community they don’t take for granted.

“We’re very lucky. We get to be a point of light in the community,” said Mike. “We like who we are.”

Connor Gilbert is a journalism and english writing concentration major at Gonzaga University. In addition to creating his own fiction and nonfiction creative writing, he is a sports editor for the Gonzaga Bulletin. Born and raised in Spokane, he is interested in learning more about the diverse religious landscape of the city and becoming more involved in the growing community.

Previous Ask An Eastern Orthodox Christian: How to dress for church
Next You Don’t Understand FāVS