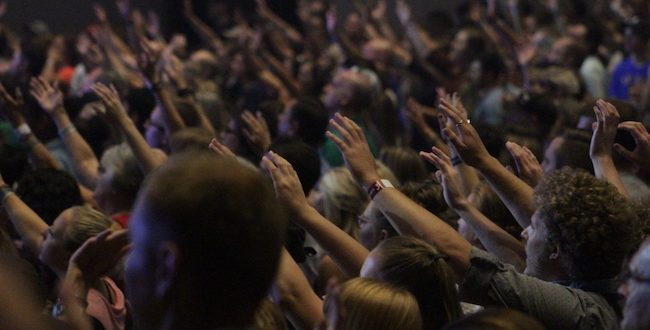 In the spirit of Christian unity, the artists at OUTCRY Tour 2017 opened its show in Spokane Friday night by praising God alongside one another.

Local Sound, Martin Smith, Bethel Music, Lauren Daigle and Jesus Culture performed at the INB Performing Arts Center on Friday for the tour’s Spokane stop. OUTCRY has visited 41 cities and ministered to more than 400,000 people for the past two years.

It’s difficult to critique a praise and worship concert. Though the artists were clearly talented and the singers performed with incredible technique, the experience resonates differently for every person. In my case, I felt the Holy Spirit’s power move within me in a packed theater full of Christians with raised hands, closed eyes and open hearts. Tears rolled down my cheeks as I offered my fears, struggles and love up to God through music.

Martin Smith, the first artist of the night to perform, said the night should change those in attendance long after the final song.

“When we’re talking about God, we’re not talking about a God who’s dead but alive …We are going to worship God like we’ve never worshipped before,” Smith added.

Afterward, he sang a new song, “Come Holy Spirit,” as a prayer to set the tone for the evening and welcome God’s presence among thousands of worshippers.

Bethel Music offered a standout performance. The band’s vocals on “For the Cross” were powerful and evocative. Cheers erupted from the audience the moment the band began its set. The vigor and joy with which each member praised Jesus allowed the audience to feel just as unashamedly vulnerable in a theater full of strangers. I remembered watching my worship leaders — including my mom for a time — sing with the same passion at the nondenominational Christian church I attended throughout my years in Las Vegas. I offered my voice as I read the lyrics on a large screen.

Others were enjoying themselves, too. Shelly Tinnel, an attendee at the event, sat near her five grandchildren. She attended OUTCRY to hear Jesus Culture, her favorite band for nearly 10 years.

“It [OUTCRY] is wonderful for young and old,” she said.

One of the most touching moments of the night arose from Bethel Music’s set. They led the audience in an acoustic sing-along to “Amazing Grace.” It was the only place  — apart from a church — where I have heard a thunderous chorus of voices singing of their redemption through Jesus’s death and resurrection. Attendees were swaying, kneeling and bowing their heads in prayer.

Later, the OUTCRY team proclaimed its passion for Jesus and the local church movement. This led to a discussion about serving others as “the hands and feet of Jesus” with a particular focus on famine. OUTCRY partners with Evangelical humanitarian organization World Vision and encourages audience members to sponsor children in East Africa.

“As I was going for a jog this morning … I thought, ‘Man Lord, you are so good. Look at this scenery.’ … In that moment, I was so compelled to worship,” she said.

And she did. Her impressive voice — comparable to a pop singer like Adele — captured the audience’s attention from start to finish. At times, the bass overpowered her strong belt. The audience members around me made comments about the loud booming and I wished we could have heard more of her sound, too.

Eric Samuel Timm, an author, artist, popular Christian speaker and Minnesota pastor, also spoke at the event. After Timm approached center stage, he wordlessly began painting two hands holding onto one another — one bloodied and one strong — as an illustration of his  “message of hope.”

“I don’t know about you, but when I turn on the news, [I think hope] is the very thing the world needs,” he said. “Hope has a name. His name is Jesus Christ.”

He detailed what hope encompasses: a full heart, genuine opportunity and the opportunity’s execution in reality.

“What gets in the way of hope?” he asked. Treasuring the wrong things. He quoted verses six and 25 of Matthew in the Bible as examples.

“All through my life I’ve had different treasures and none of them are with me on this stage,” Timm said. “Bringing hope to this world requires one thing: treasuring people.”

Timm recently watched a documentary about the White Helmets in Syria, a group that rescues injured people from the rubble of the region’s civil war. Some dug a child out from underneath the rubble for 32 hours. The Holy Spirit asked Timm: What would you do if your wife or two children were trapped? Obviously, he would dig.

He ended his teaching with thought-provoking questions: What would you do if it was not your loved one who was trapped? Would you dig as if it was someone else? Do you really treasure people?

When he presented the opportunity to sponsor a child in East Africa through World Vision, audience members’ hands shot up into the air.

The tour continues tonight in Seattle.

View more photos of this event on the SpokaneFāVS Facebook page.

Previous American Willing to Listen
Next Ask A Muslim: What’s the Islamic view of interfaith marriage?