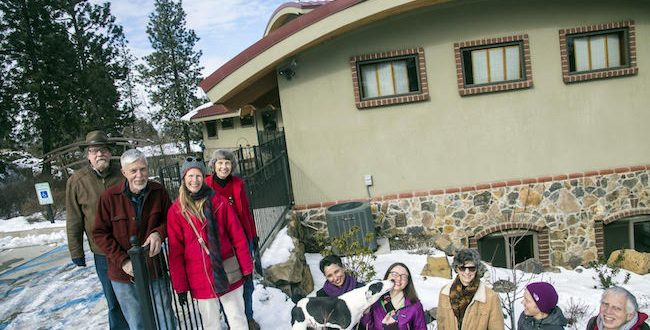 “Community is a sign that love is possible in a materialistic world where people so often either ignore or fight each other. It is a sign that we don’t need a lot of money to be happy–in fact, the opposite.”

This past summer, my husband and I jumped ship on the American Dream. We are forfeiting our large home and two-car garage and a yard and garden of our very own that we intended to love, repair and weed for years to come. Instead, we opted to join the first cohousing group on the east side of our state, choosing to live in a condo that would reduce our private square footage by half, downsize us into a one-car garage, allow us to participate in the work and fruits of a communal garden, woodshop and more, and exchange my cooking for all the households one night a month for 24 feasts provided by my new neighbors.

For some, the scenario describes a nightmare of involvements. But my husband and I believe that cohousing is our best shot at village life with multigenerational interaction and the support fundamental to health, happiness and longevity (science now backs up this claim). In truth, for most of history, humanity evolved within this take-care-of-your-neighbor circle. Only with the development of the suburbs and single households do the majority drive home, park in their garage and enter the house through said garage. They may rarely see their neighbors or, as many people have shared with me, won’t even know their names. And we wonder why there’s a loneliness epidemic?

I’d heard about cohousing for years and yearned to live in a physically close community where I wouldn’t have to exchange six emails to rendezvous with a friend for coffee, but instead could see her on her porch and help myself to the chair right beside. When I heard about the project in Spokane, I set up a meeting with one of the founders. And then I let Doug, my husband, know about it. And before he could say whoa, we had joined. I figured it was a lot like having kids—people could detail the joys, challenges and the heartaches—but it’s impossible to understand parenting from one’s imagination. Same with cohousing I assured him.

I can’t say whether this was more a spiritual leap or a practical step of downsizing. I suppose that’s too binary a view. The decision involved both, and the commitment continues to bridge the two. Before we joined, a site had already been chosen in the Perry District with several buildings and an urban farm and orchard that had been lovingly tended for 30 years. We would work with Charles Durrett and his partner Kathryn McCamant, who, together, had studied cohousing on its native turf in Denmark, helped dozens of communities in the US build cohousing, and written the bible on the subject: “Creating Cohousing.” Katy now consults with us by phone bi-weekly about development and finance issues; Chuck came to Spokane over the last five months to facilitate the workshops in which we designed a mutual vision. In sweeping terms, the workshop process can be chunked into brainstorm, discussion, and consensus. We designed in macro terms (the whole site) and micro terms (our individual condos) and somewhere in-between (the common house).

After each workshop, I came away feeling that I was participating in an utterly rare and unique experience of a lifetime: to brainstorm aspirations for living well in community, and then to design the structures and spaces in-between that would facilitate the best in human interaction. A partial list of our first brainstorm for the whole site looked like this:

The list of activities we wanted to encourage reads like my close-to-home bucket list. Among the many: bee keeping, canning, meditating, foraging, bonfire-ing, hot tubbing, dancing, music jamming, exercising, performing, wood working, celebrating, eating, coffee klatching, reading, making and displaying art—and my favorite, giggling, surely a superior spiritual practice if ever there was one. Much to my delight, the group approved my suggestion for a small hut, a spiritual sanctuary for meditation, prayer or contemplation, perched above the garden and orchards (There is no religious affiliation associated with our community).

Do I anticipate this will be a utopia absent our very human blind-spots and imperfect habits? No. There’s a lot of business and busy-ness involved in our project’s development. My son, a Buddhist monk, believes that living in community is an essential element for spiritual maturation. Ajahn Sumehdo, his teacher, was once asked to describe the fastest way to enlightenment. After a long pause he replied: “Live in community.” I smile when I think of Charles Durrett’s (our architect) quip: “Co-housing: a great way for adults to grow up.”

I might be leaping off a cliff that has a few more unknowns than anything I’ve done in decades, but I’m holding hands with open-hearted folks willing to do the same. We’ve ensured that we have supports in place every step of the way to guide us. All of us will likely learn to be more generous and less self-involved—I see that as a great thing for each of us, a truly worthy goal. Cohousing is more than shrinking the stuff of our outer life: done well, it promises to be an expansion of our inner life.

Previous Lent: A Time to Learn
Next Fictional story in “Only Child” grim reminder of Parkland shooting