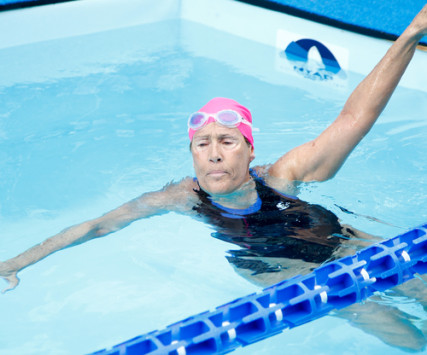 Oprah interview stirs debate: What is an atheist?

(RNS) What was supposed to be a touchy-feely, one-on-one interview by Oprah Winfrey with long-distance swimmer Diana Nyad has morphed into a broader, sometimes angry exchange about what it means to be an atheist.

During the hourlong segment, Nyad declared herself an atheist. She then explained, “I can stand at the beach’s edge with the most devout Christian, Jew, Buddhist, go on down the line, and weep with the beauty of this universe and be moved by all of humanity. All the billions of people who have lived before us, who have loved and hurt and suffered. So to me, my definition of God is humanity and is the love of humanity.”

Nyad reiterated her lack of belief in a divine being, but the exchange upset many nonbelievers. They took to the Internet and social media to express outrage at Winfrey’s assumption that only believers can experience the transcendent or spiritual.

“As an atheist I am even more in AWE and WONDER about the Universe and Nature,” tweeted someone called “Mark Secular.” “I don’t need a god @Oprah to see the beauty of it.”

“(I)t’s ‘difficult’ enough being an atheist in these parts,” Stacypie tweeted from Dallas. “I don’t need her defining MY spirituality for all.”

And Boston Atheists, which draws members from across New England, launched a Twitter and Facebook campaign to get Winfrey to officially apologize.

Within a day or two of the broadcast, several prominent atheist leaders and organizations issued statements expressing disappointment with Winfrey. Most saw in the talk show host’s rejection of Nyad’s atheism what polls, studies and often their own experience tell them — that atheists are among the least trusted and least liked Americans.

“Oprah … does more to perpetuate negative attitudes toward nonbelievers than Pat Robertson or James Dobson ever could,” wrote David Niose, president of the Secular Coalition for America, on the website of Psychology Today. “Oprah, as a media tycoon and a beloved celebrity whose opinions are taken seriously by millions, has just confirmed that atheists are ‘the other,’ outsiders who just don’t belong in the in-group.”

Chris Stedman is the assistant humanist chaplain at Harvard University and author of the new book, “Faitheist: How an Atheist Found Common Ground with the Religious.” Photo courtesy Alex Dakoulas

On CNN’s Belief Blog, Chris Stedman, Harvard University’s assistant humanist chaplain, wrote, “Winfrey’s response may have been well intended. But it erased Nyad’s atheist identity and suggested something entirely untrue and, to many atheists like me, offensive: that atheists don’t experience awe and wonder.”

Others weighed in on Salon.com, Patheos.com, Skepchick and other atheist and humanist blogs. Even Fox News’ “The Five” weighed in, with co-host Eric Bolling saying, “Oprah shouldn’t have an opinion whether Nyad believes in God or not.”

Why has this struck such a deep chord? Ryan Cragun, an associate professor of sociology at the University of Tampa who studies atheists, said it may be because atheists are beginning to be more public about their lack of belief, seeing this as an opportunity to express their difference, their presence and their rights — much like the gay community has done before.

“Americans are beginning to realize that there are atheists, but they don’t really know who and what atheists are,” Cragun said. “They likely still think atheists are just crotchety old men saying, ‘Your god doesn’t exist!’ Thus, when they encounter an actual atheist who says, ‘I’m constantly amazed at the world we live in and it makes me stop and wonder all the time,’ they are surprised.”

Marcia Z. Nelson, author of “The Gospel According to Oprah,” agreed, saying Winfrey may be exhibiting more unawareness than intolerance.

“As I see it, Oprah was being her spiritually and professionally curious self,” Nelson said. “The problem atheists have is partly one of language; the God and religion people have been working on refining their descriptive languages for millennia. Oprah was actually doing atheists a favor by quizzing Nyad. Atheists need to concentrate more on expressing awe and less on taking hyperbolic offense where none is intended.”

The post Oprah interview stirs debate: What is an atheist? appeared first on Religion News Service.

Previous Ask An Atheist: Could you ever be convinced of the existence of God?
Next Quote 102113

To the extent that Oprah wants to define for other people what they themselves believe then she will be getting into trouble. If Oprah wants to think “god” is wonder and mystery then fine. I would think any Christian or Muslim or Hindu would justifiably feel she is minimizing religious convictions along with atheists here. St. John’s cathedral downtown was not built to consecrate “wonder and mystery” any more than the pilgrims to Mecca visit there in order to go all gawky about “wonder and mystery.”

If a person lists off specific gods (including, if one likes, that old “bearded guy in the sky”) and checks off “nope, I don’t believe that one exists” in every single case, then you are a functional atheist. Putting “wonder and mystery” on the list could be done, along with “toast with butter”, but it seems to this faithfully faithless fellow here that this is demeaning the import of all of the above.

Oprah, please keep your hands off our nomenclature!

I’ve had this experience myself many times. I say I’m an atheist, the person I’m talking to gets all pie-eyed, and then starts looking for ways to define me as something else. Presumably they do this because they think I’m a nice guy, and they can’t jibe my personality with the label “atheist.”

It does feel offensive though. I don’t go running around defining other people’s religious self-identities and I expect the same courtesy. I feel that a refutation of my self-identification actually counts as an act of aggression.

This same sort of act of aggression occurs when a Christian (or Muslim, Jew, whatever) states that someone who doesn’t conform to THEIR version of Christianity is not a “real” Christian. Interestingly, I have only seen this in two situations:

I’m not sure if my experience is representative, but I find it both troubling and fascinating. In case #1 the person is effectively saying “you don’t GET to be one of us because you are not like me.” In case #2 the person is effectively saying “he NEVER WAS one of us in the first place because we are nice and he is nasty.” In both cases the offender is assuming that he has authority to define who is “one of us” although almost always they claim that it’s the sacred text and not they who is the “real” authority.

Oprah is doing the opposite to case number 2. She is saying “you MUST be one of us because you are nice, and atheists are nasty.”

At least this is how it looks to me.

When I think of atheism, I remember the story of the woman who wanted to ban the Pledge of Allegiance because it mentioned the word “God”. Somehow atheism in the US became synonymous with anti-patriotism as a part of the argument that the US is the new Israel, Providence, Founding Fathers as Dynamic Christians nonsense. For Americans, it is difficult to imagine being a “real American” if they are not Protestant. It’s only been in the last 50 years that Catholics have been accepted with Jews and Muslims still seen as politically threatening. My guess is that no one really engages the meaning of atheism as a belief system related to the workings of the universe but more as a symbolic word related to political leanings.