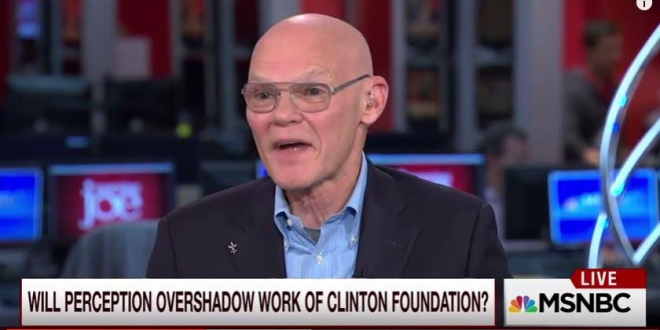 While appearing on MSNBC’s “Morning Joe,” Democrat operative James Carville claimed that people would die, adding that someone is going to hell if the Clinton Foundation should be closed.

“As a human being I think the foundation does an enormous amount of good, but from strictly political standpoint, like my sixth grade teacher says, somebody is going to hell over this. Understand here, this is saving people’s lives,” he said.

It struck me that this isn’t the first time a liberal has suggested people will go to hell for opposing a favorite left-wing position, organization or candidate.

Earlier this year, former Secretary of State Madeleine Albright suggested women who don’t support Hillary Clinton deserve a “special place” in hell, even though she didn’t specifically say they would suffer eternal separation from God.

“There’s a special place in hell for women who don’t help each other!” she said while speaking in New Hampshire on Clinton’s behalf.

Albright later apologized, saying she didn’t specifically mean to imply those who don’t support Clinton would go to hell, but the damage was done.

“I did not mean to argue that women should support a particular candidate based solely on gender. But I understand that I came across as condemning those who disagree with my political preferences. If heaven were open only to those who agreed on politics, I imagine it would be largely unoccupied,” she explained.

Then there’s Charlie Rangel, the long-serving representative from New York.

Back in September 2013, he mischaracterized Jesus’ words to say that those who don’t support food stamps or Social Security would go to hell.  The National Review reported at the time:

“Anyone who is familiar with the Bible,” Rangel said, should know that “Jesus said you’re going to Hell if you don’t treat the lesser of his brothers and sisters” with compassion. Republican believers, he explained, will be assessed by a “higher authority” for attempting to thwart government programs that help the poor: “He said he was hungry, you didn’t give him food stamps … He was thirsty, you didn’t purify the water … he said he was naked, you didn’t give him Social Security.”

In short, he argued that those who disagree with the concept of a bigger and more intrusive federal government are going to hell.

“I had no idea the Scriptures were so specific about Social Security, but hey, if Rangel says he knows the Bible, he knows the Bible. He said he knew the tax code, and…well, nevermind,” Mary Katherine Ham wrote at the time.

Back in 2010, “The View” co-host Joy Behar, angry over an anti-illegal immigration ad put out by Senate candidate Sharron Angle, called her a “b***h,” and declared that “she’s going to hell.”

Being a Bible-believing Christian with conservative political views who usually votes Republican, I decided to consult Scriptures to see if any of these things would, in fact, consign one to an eternity separated from God where there is weeping, wailing and gnashing of teeth.

Needless to say, I found nothing about the Clinton Foundation, Social Security or illegal immigration on the southern border.

I did, however notice two things that could send one to hell; Rejecting Jesus Christ as one’s personal Lord and Savior, and blaspheming the Holy Spirit.

I’m not going to engage in a debate about the difference between Calvinism and Arminianism as I believe there’s a balance between the two, but suffice it to say I found no mention of the things some on the left claim will separate me from God.

But then again, my Bible doesn’t contain I or II Opinion, two apparently ancient manuscripts constantly being revised depending on the Big Issue Of The Day.

Previous Father Knows Best: What if Trump wins?
Next France, the burkini and ‘a battle of cultures’