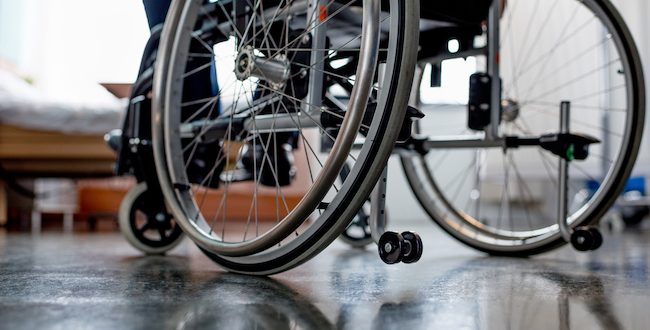 Only her body is broken

I recently visited a family I have known for almost four decades – a family that has experienced more pain than any family I have ever met. I am utterly amazed every time I visit them because the pain hasn’t destroyed them.

The mother’s back is so fragile that no chiropractor will touch it, and she still suffers, decades later, from a hospital’s botched response to a botched colonoscopy. The dad is a physical wreck, not just from aging but from the effects of once being a janitor in a chemical plant. They are impoverished. And their youngest daughter, now 43, has been a helpless paraplegic since age 5. (There’s even more I could tell you but that’s enough heartbreak for one letter.)

The daughter, who can barely speak, recently told her mom that she thinks the world will soon come to an end.

She believes this because of what she sees on television. She watches news programs from two nations, in two languages, so she doesn’t just get the American media’s point of view.

What does she see that we don’t? She sees those in leadership positions who are completely the opposite of her. They have perfectly functioning bodies but, to her, their minds are broken. Yet they are the ones in charge. And she believes that “they” – whether they be the leaders of government, industry, finance, science, education, the environment, law, religion, medicine, or entertainment/culture – have pushed our world to the brink of physical and moral destruction.

This daughter and her parents believe in God. They worship Jesus Christ. Many of the world’s leaders will say this proves that this family’s minds are the ones that are broken. And talking about the end of the world is more proof, they will say, because people have been predicting it for millennia.

But if all of us were to know the world through eyes and ears like this daughter would we dismiss her prediction? The vast majority of us are, mercifully, unlike her – confined to a wheelchair, unable to feed or bathe herself, barely able to speak a few understandable words. In short, we don’t experience the world in any way close to the way she does.

This daughter knows her own suffering and relates to the suffering of her parents, which makes her uniquely attuned to all the suffering in our world – suffering she sees on the TV news every night. To us, it’s just another snippet of news. But to her, that suffering is excruciatingly real.

God also knows, better than anyone, what suffering is. Which means that, at least in this case, his thoughts aren’t quite so distant from this daughter’s thoughts.

Wouldn’t it be funny?

We human beings have always discriminated against and ignored those who don’t have the superficial external characteristics that breed momentary respect. We turn away from those who differ from us on the basis of the money in our pockets, our physical capacities, our external appearance, without ever bothering to go beyond the limits of our own minds to see the value within someone else – the value that can inform and enrich us.

This is nothing new. In case you’ve forgotten, those who heard the prophets of old dismissed those prophecies as funny. They thought the prophets were nuts and they laughed at them. And then they paid the price. How often will we ignore or denigrate those who are different but no less valuable than us before we, too, pay the price?