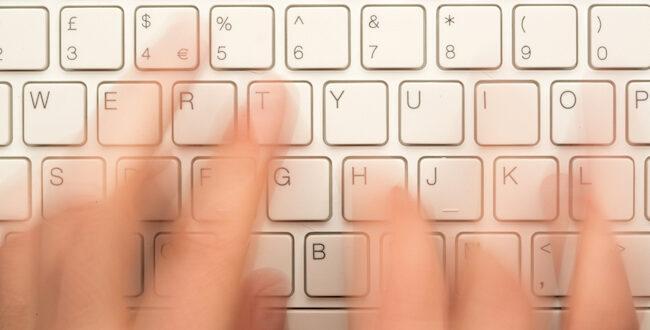 Hand typing on keyboard of computer/DepositPhoto

Writing for FāVS has been a blast. It is not always easy, though. Developing a weekly column topic is difficult, and the writing process can be painful.

After more than 50 years in the news business, I retired at the end of May 2020 just as the pandemic was shutting everything down.

At 70, it was time to step back from full-time work. But as with most new retirees, I was scared to my bones of looming boredom, and worse, irrelevancy. Career acts one and two were successful enough, I suppose. But I needed a third act.

That meant writing again, or more accurately, relearning to write. I moved into newspaper management in 1983 and stopped writing, for all intents and purposes. Post-retirement and in pandemic-caused isolation, I looked to writing as a sort of therapy.

Enter FāVS founder Tracy Simmons, a former colleague at the University of Idaho. I asked her if I could write for FāVS, the digital news site she founded. She said “yes,” and here I am.

The transition from reporter, editor and educator to opinion columnist has taken time and more work than I expected. I tell former colleagues who ask about the transition that you must bring to the effort a good share of humility.

For one thing, you learn quickly that not everyone is interested in your golden prose or what you think of as your thoughtful, considered and hugely significant opinions. Some readers are downright disdainful.

I laid out my columnist ambitions in my first FāVS column on July 5, 2020. As an atheist writing for a site that deals with religion, I told readers I would focus on values more than faith:

Since that first column, I have written a total of 59: six on the culture wars, 18 on politics, 18 on personal and family issues, 11 on the pandemic, six on media issues and ethics.

Professional reporters understand that column writing is fundamentally different from news reporting. As a reporter and editor, beholden to professional ethical standards, I was obligated to mute my personal voice, avoid sharing personal opinions and never use first-person in my writing.

An opinion columnist lives by ethical standards of honesty, truth-telling and fact-based commentary, just like any professional reporter. But personal voice and strong, clear opinions are fundamental to the columnist’s craft.

Early drafts of my first few columns were far too weak-kneed, vague, unfocused and moderate to a fault. Those first few required several rewrites before I considered them strong enough.

And I had to become comfortable with “I.” A column is an intimate conversation with readers where first-person is as important as it would be in any face-to-face conversation.

It took some effort to develop first person as a writing default. Initially, it seemed to me that my columns were more about ego than clarity, an endless string of “I think,” “I believe,” “I feel” and “I did.” Then, I realized readers organically accept the mechanics of first person. I stopped worrying about “I.”

To be relatable, a columnist must write from the ground level. Just weeks into my FāVS role, it became clear that pieces with the highest readership blended personal, relatable experiences with issues analysis. That gave me the confidence to take on explosive issues such as political extremism, white supremacy and anti-Semitism.

There are times when, with some reluctance, I have written about important moments in my personal life not really connected to those larger issues — moments involving people and incidents that I have mostly kept to myself.

Those columns have been difficult to write, and I always fear they will appeal to no one outside my family. But it seems those columns, not the political pieces, have been among the most widely read and shared.

That anyone cares at all about what I write is still something of a surprise. I am humbled by readers’ interest in my thoughts.

Preparing this anniversary reflection, I went back to review the year’s work. Some columns are truly awful. It is easy to tell those times I was pressed for an original idea. I will spare you those links. But there are some I still like, my personal greatest hits as it were. Here are a few.

After 50 years in news journalism, I am again a work-in-progress. I am not sure I can even call myself a professional in this, my third act. FāVS does not have the resources to pay columnists so I still have amateur standing. (But if you want to support young reporters who are paid, please consider becoming a member.)

For me, the value has been in the writing and in the learning. It has been my therapy in the face of COVID-19 and retirement and an opportunity to stay relevant as I enter the twilight of a long and happy career.

As third acts go, that is not a bad thing.

Thanks, Tracy. Thanks, FāVS.