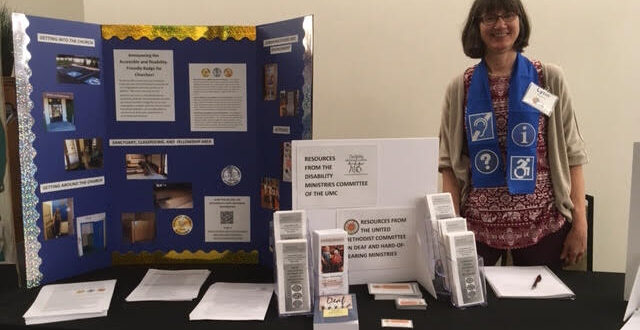 Lynn Swedberg at a UMC conference/Contributed

Years ago, Angela Lindig taught kindergarten and pre-K Sunday School. Her oldest daughter, who has developmental and physical disabilities, was one of her students.

When it was time for her daughter to move up to the next age group, Lindig went to work. She sought out inclusive curriculum, talked to friends who had implemented changes in their churches and proposed an idea to a church leader: a program that would train older kids to be one-on-one supporters for kids with disabilities, like her daughter.

She was swiftly turned down.

“After several years of going to that church … we walked away,” Lindig said. “We didn’t feel welcome. We didn’t feel supported. And there was no place for my daughter.”

Lindig—the executive director of Idaho Parents Unlimited, a statewide organization that supports the families of children with disabilities—said she believes faith communities have improved their openness to people with disabilities in the years since her experience. But the work of accessibility and inclusion continues.

“People are people, and everybody deserves that right, the access to their faith,” she said.

Churches and the ADA

Lidig is not alone in her experience. The upcoming 30th anniversary of the Americans with Disabilities Act (ADA) on July 26 is a reminder of the ways faith communities have struggled, or failed, to include people with disabilities.

When the ADA was on its way to becoming law, some Christian groups opposed all or some of it, including the National Association of Evangelicals, the Association of Christian Schools International, and, as reported in The New York Times in 1991, “a coalition of churches, backed by the White House, [that] lobbied for a blanket exclusion on the ground that to include religious institutions would violate the doctrine of the separation of church and state.”

As a result, religious entities are exempt from Title III of the ADA, which prohibits descrimination on the basis of disability in places that provide goods or services to the public, such as stores, restaurants, theaters, banks and medical offices.

“This effort damaged the witness of the church to the disability community in our country while also limiting disabled people from being theologically trained in seminaries,” disabled activist Shannon Dingle wrote in Sojourners magazine in 2018.

Many religious groups recognize they can, and must, do better than the law requires. Across the Inland Northwest, faith communities and places of worship have invested in making their buildings and services more accessible, inclusive and welcoming.

When Bryan Branson attended Manito United Methodist Church in Spokane as a child, he often felt frustrated and bored. Branson, who is Deaf, had little support to understand what was going on.

When Branson returned to Manito as an adult, he helped start the church’s nearly 20-year effort to improve access and inclusion.

One of the needs the church recognized and fulfilled early on was for an American Sign Language interpreter. Church members including Branson, who uses ASL, wanted to make interpreters available for Bible studies, church discussions, meetings, events—all aspects of the community.

“It’s really important to have people have access to worship and the word of God, and prayer, and the whole act of togetherness,” Branson said.

Lynn Swedberg, the Inclusion Committee’s founding chair and an occupational therapist, said accessibility and inclusion isn’t about labeling who has a disability and who doesn’t, but rather it’s about recognizing what accommodations people need to participate.

At Manito UMC this has meant simple changes, such as printing large-print bulletins and adding a loop sound system, and fun efforts such as starting a Sign Choir for people with and without hearing loss. They’ve also encountered challenges—like many churches in old, complex buildings, they discovered adding an elevator was prohibitively expensive, but they still have been able to increase access with modifications such as ramps and a chairlift.

The church conducts an annual audit to find out what else can be improved or added.

“Theologically, the body of Christ is not complete unless we’re all there,” Swedberg said. “If everybody’s exactly the same, that’s a pretty limited body of Christ.”

Much like Manito UMC, the Unitarian Universalist Church of the Palouse has worked for years to improve accessibility in their buildings and services.

“One of our core values is radical hospitality,” said the church’s pastor, Rev. Elizabeth Stevens. “Across the board, the idea is we don’t expect people to acculturate to what we do, we try to challenge ourselves to change in response to everyone who comes through the doors.”

The church has introduced accommodations for people of all ages, including collaborating with the families of children who have physical, developmental or emotional needs to provide personalized support.

But the church’s religious education space—which houses programs for children and families—is a turn-of-the-century building called the Yellow House. Alongside troubles with the electrical and sewage systems, the Yellow House simply wasn’t accessible for people with limited mobility.

Last year, the church launched a building project to remove the Yellow House and add on to the main church building, with accessibility as a top priority.

“Religion means to re-bond. It comes from legare, the same root word as ligament. Religion should always be about bringing us back in relationship, back together, and outside of individual selves. We’re weaving together people,” Stevens said. “If there are people missing, there’s a perspective that’s missing, and you don’t get to embrace the wholeness of the human experience.”

Mark Leeper—executive director of Disability Action Center Northwest, a regional advocacy organization run by a majority of people with disabilities—said it’s important to remember that even if the ADA did apply to places of worship, the ADA only includes minimum guidelines. Understanding what individual people need is more important.

“It’s an awareness thing on a human level, rather than arbitrarily looking at building codes and legal requirements,” he said.

Faith communities that want to start improving their accessibility might start with a simple question: “Are we excluding somebody?”

Leeper suggested forming a group of people with personal experience or an interest in inclusion to evaluate every aspect of a community’s programs—not only buildings, but also services, events, child care, educational classes and more.

After listing all the programs and who is or could be involved, the group should consider what potential barriers might prevent somebody from participating, keeping in mind people with physical, developmental, intellectual and sensory disabilities, mental health conditions and mobility needs.

Once they have that list, the next step is identifying how to remove those barriers and developing a plan and budget to start making changes.

A mistake some groups make in this process, Leeper said, is forgetting that needs are individual—something that works for one person may not work for all. He encouraged faith communities to get a cross-section of opinions and encourage people to be creative.

“The biggest thing is openness,” he said.

Lindig, of Idaho Parents Unlimited, said faith communities that want to better serve children with disabilities should talk to families about their children’s needs.

“Help families know they’re welcome and know we can work together to figure out what those needs are,” she said.

Nonprofits like DAC NW, IPUL and many others can help faith communities in their work to become more inclusive, pointing them to experts, resources, trainings and good examples. Nonprofits also work with people with disabilities and their families to help them advocate for themselves and support their faith communities as they respond to their needs.

Of course, the Internet is packed with resources, too. Lindig said the Sunday School curriculum she once had to seek out is now readily available with a quick Google or Pinterest search.

No matter where a faith community finds its starting place, making change is possible.

You can help support our journalists by making a donation to FāVS today!