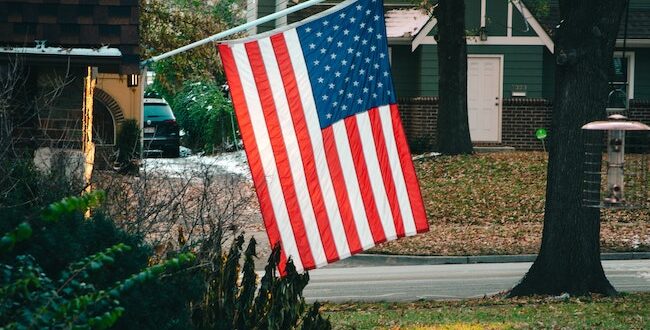 Photo by Jonathan Meyer on Unsplash

I consider myself a patriot.

I fly the flag on Memorial Day, July 4th, and Veteran’s Day. I stand for the Pledge of Allegiance (though I do omit the words “under God,” an inappropriate Cold War addition). And when the national anthem is played, I stand and place my hat over my heart.

Even though I have done those things most of my adult life, I have avoided the term “patriot.”

Not That Kind of Patriot

For me I think the word has suggested some sort of implicit adherence to the old “my country, right or wrong” adage.” I am not that kind of patriot.

Thoughts of patriotism – and its cousin, nationalism – have been on my mind lately as I watch events unfold in Russia and Ukraine, and in the U.S.

This is how the Merriam-Webster dictionary defines patriotism: “Love for or devotion to one’s country.” What an inadequate definition to describe what is for most of us a complicated relationship with country.

The Stanford Encyclopedia of Philosophy provided a more complex set of concepts in 2009:

The encyclopedia argues that patriots must personally identify with their country,

“Such identification is expressed in vicarious feelings: in pride of one’s country’s merits and achievements, and in shame for its lapses or crimes (when these are acknowledged, rather than denied).”

Note that last. Real patriotism develops in an open society where dissent is accepted and where the nation’s lapses, failures and crimes are freely acknowledged.

A substantial philosophical debate revolves around the differences between patriotism and nationalism. As the Stanford writers note, the terms are often used interchangeably. But at their core, patriotism involves love of country as a national, political entity while nationalism is based on love of ethnicity, culture, human connections, and is often embodied by a single individual.

Both patriotism and nationalism can lead to terrible things as history shows us. But the major human tragedies generally grow out of a perverse nationalism that creates the “us versus them” dynamic in an authoritarian society.

And as we are seeing now, patriotism and destructive nationalism can vie against one another in the same place at the same time as is taking place now in the U.S. It is by no means clear which will triumph.

For me, at least, these are deep waters.

I never gave it that much thought, even when flying the flag or standing for the anthem.

But I have been struck by the different ways we consider patriotism in the context of the Ukrainian war.

The Ukrainian resistance has been fueled by a profound sense of loyalty to the political entity that is Ukraine. That patriotism has seemingly united disparate elements of the population, including ethnic Russians who have benefitted from Ukrainian independence and fear an end to Ukrainian democracy. The invaders counted on those ethnic Russians to rise for the mother country, to support the invasion. That has not happened outside the far eastern districts that were already in revolt.

Ukrainian patriotism has focused itself on the leadership of President Volodymyr Zelenskyy whose steadfast and courageous leadership, firmly rooted in popular democratic support, has inspired much of the world.

Russians can be viewed as patriotic, too. It is easy to monitor Russian message boards and English language “news” sites and the messages there are not so hard to understand.

There is an unambiguous love of country, of the homeland. There is a desire to support the homeland in its struggles, particularly when Russians believe their survival is at stake. And there seems to be a willingness to sacrifice for the nation.

But Russian patriotism is focused on one person, on the leader, President Vladimir Putin. Putin is no Zelenskky. He is an authoritarian who will not allow his countrymen to dissent, to acknowledge the nation’s lapses, failures, and crimes. Allegiance to a single individual who has come to embody the state is not patriotism. It is fundamental to authoritarian nationalism.

Because of pervasive censorship, it is hard to find voices opposing Putin. He has done a brilliant job squelching dissent. What can be read is over-the-top laudatory.

Any of this sound familiar?

Go to the conservative and Republican party messages boards and see what is being written about Donald Trump.

“Only he can save the country from our enemies within.” “He understands what it is to be American.” “He has been sent by God to save us.” “Only he has the answers to our problems.”

The former president has said all those things of himself.

Trump is an admirer of Vladimir Putin. He also shares Putin’s authoritarian nature.

Clearly many who support the former president and his hijacked party think of themselves as patriots. But their patriotism is embodied in an individual. They seem unable to acknowledge the nation’s lapses, failures, and crimes; certainly not when they ban instruction on race, gender, and imperialism and insist on imposing their religion on the rest of us. Theirs is a dangerous nationalism that is a threat to American patriots whose love of country is not embodied by an individual, but which is rooted in the love of an open society.

In the U.S. patriotism and dangerous, authoritarian nationalism vie. And the outcome is uncertain.

Previous It’s a Great Springtime for God!
Next A guide to fostering a church community in your neighborhood