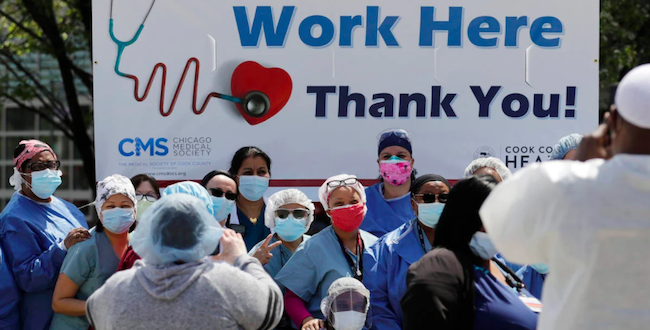 Healthcare workers at John H. Stroger, Jr. Hospital of Cook County take photos with co-workers after they watched the U.S. Navy's Blue Angels flight demonstration squadron fly over in Chicago, Tuesday, May 12, 2020. The flyover was a salute to first responders in the wake of the coronavirus pandemic. (AP Photo/Nam Y. Huh)

“Never was so much owed by so many to so few.”

Winston Churchill, Britain’s prime minister during the Second World War,  said that* in August 1940 about Britain’s Royal Air Force, which had just started defending the nation from Germany’s air attacks.

Lately I’ve been listening to Erik Larson’s new biography of Churchill,”The Splendid and the Vile.” One thing I’ve learned from the book is that Churchill’s praise for the RAF came early in the war, before Britain had yet suffered much on the home front.

In August 1940, when Churchill spoke these words, almost everything that would transpire during the war still lay ahead. The Blitz that would decimate London didn’t start until September, and the war would go on nearly another five years.

That’s what I’m thinking about on this Memorial Day, as we honor the soldiers who have died serving our country. This year, our health care workers have also filled that role. They are the “so few” who have been battling with this virus on our behalf. Many of the rest of us are able to go on with some fashion of normal life, even in quarantine, because of them. Because of them, we have the privilege of complaining  that we’re bored or we can’t get a haircut.

A virus has bombed a few of America’s major cities, but for many of the rest of us who don’t happen to live in New York or Chicago or New Orleans, it’s just an irritant that has disrupted our lives. We don’t have to fear for our lives when we go to work every day.

For some of us, the fear is hovering out there as a distinct, if surreal, possibility. We recognize that in our race between the virus and the hoped-for vaccine, the virus will probably come first. We can only hope we won’t be in the 15%-20% of people who get a more serious case, and certainly not among the 1% or so of people who die of it.

Not so with health care workers. People don’t use the battlefield phrase “the front lines” for nothing. Our doctors, nurses and orderlies are on the vanguard of this pandemic, potentially exposing themselves to the virus every day when they go to work. They are up close and personal with the very sickest people. That means that they’re not only more likely to get infected, but it’s possible they will have a more severe case if they do.

Many of them are young. Some of them are immigrants, representing the best of America’s heritage of diversity. They went into the helping professions because they wanted to help people. And now the virus is exacting a cruel toll, both physically and emotionally.

I have one friend, a doctor, who has not touched anyone in his family in more than two months because someone in their household is immunocompromised. Another acquaintance, a nurse, has already had a nasty bout with the virus and is now back at work, but she is still very fatigued.

I don’t think most of our front-line health care workers are going to come out of this entirely unscathed, even if they don’t get the virus themselves. Already we are hearing about PTSD-like experiences among doctors and nurses who were in New York hospitals during the worst of the crisis there, when the morgues couldn’t hold all the bodies.

Health care workers routinely handle a lot of stress in their jobs, but who could prepare for this? In addition to people dying — sometimes several dozen patients in one hospital on the same day — they’re also being asked to serve, essentially, as hospice chaplains. Since patients’ family members can’t come inside hospitals and nursing homes to be with their loved ones at the end, it’s health care workers who are making sure that no one dies alone.

One friend of mine whose mother died of COVID-19 last month said that the nurses in the nursing home were amazing. “We are grateful for these brave, compassionate souls who were with her because we could not be,” he wrote on Facebook.

This is going be the new normal for a while. It’s very likely that we have only come as far as Britain had in  August 1940.

In wartime, there’s often a tendency early on to underestimate how long a conflict can possibly go on. “The war will be over by Christmas” is what people have told each other in every war I’ve ever studied as a historian. It’s a reassuring statement that almost never turns out to be true.

Pandemic Not Going Away

What health care workers on the front lines know that most of the rest of us have the privilege of not facing is that this pandemic is not going to be dispensed with in a matter of weeks. And for them, that means they could be beating back death, serving as ad hoc hospice chaplains, and not hugging their loved ones for many months to come.

At least one health care worker has died by suicide. Dr. Lorna Breen, who had no history of mental health problems, took her own life last month after treating COVID-19 patients in New York. “She was truly in the trenches of the front line,” her father told the New York Times. “Make sure she’s praised as a hero, because she was. She’s a casualty just as much as anyone else who has died.”

So for Dr. Breen, and all the health care workers who have died this year, directly or indirectly, of COVID-19: we see you. We remember you. And we, the many, are grateful for the service of the few.

* Churchill’s exact quote is “Never in the field of human conflict was so much owed by so many to so few.”

Your donations help pay our subscription to the Religion News Service.

Previous Donald the Apostate and Things to Come
Next Ask A Religious Scientist: Jesus and the Easter Story