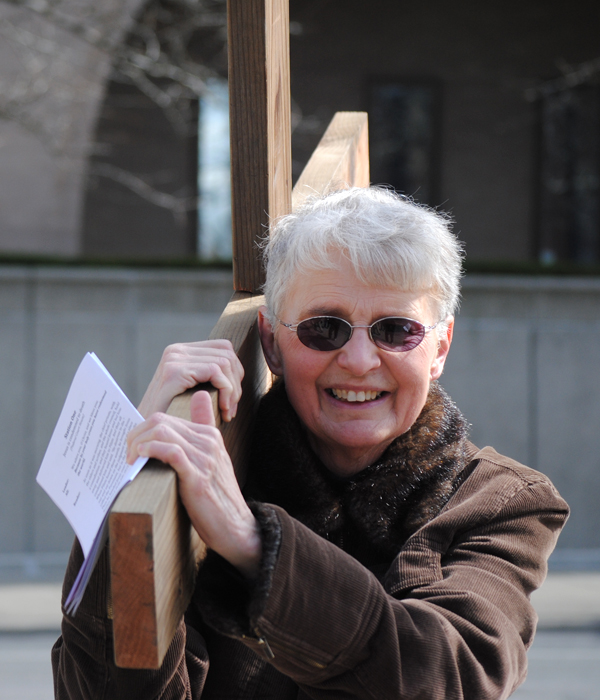 On Good Friday, group participates in Urban Stations of the Cross

They processed through downtown Spokane, a wooden cross bobbing above their shoulders, stopping 14 times to pray and meditate on Jesus’ final hours, his crucifixion and his resurrection.

The Rev. Bill Osborne of St. Stephen’s Episcopal Church organized the Urban Stations of the Cross. He said the Good Friday event was a way to recall, “those who suffer, while walking in the footsteps of Jesus.”

The two-mile march began with a prayer at Riverfront Park and concluded two miles later under the freeway at 4th and Howard. The stations in-between — including the Occupy Triangle, the bus transit center, Cup of Cool Water and the Veteran’s Affairs Center — were selected to serve as a reminder that people are still oppressed, Osborne said.

“The Public Procession of the Way of the Cross is a way for us to….connect the events and emotions of the lives of people in Spokane to those in the life of Jesus,” Osborne wrote.

Karen Mobley, a member of Westminster Congregational United Church of Christ, was one of about 15 people who participated in the event.

She said she had participated in something similar with her church once before and was excited to do it again.

“It seemed like an appropriate Good Friday act,” she said. “I like the fact that it’s a witness to both of us. By participating you see what’s going on in your community, and at the same time people are paying attention to you. It’s not an intrusive thing, there’s a soft edge around it.”

On Saturday many Christians will celebrate Holy Saturday, or Easter Eve, which memorializes the day Jesus’ body laid in the tomb.

More photos of the Urban Stations of the Cross are available on our Facebook page.

Previous VIDEO: Urban Stations of the Cross
Next VIDEO: Easter Message and Transmission

Thanks Jeffrey! I’m going to use some of your photos later on if that’s OK!