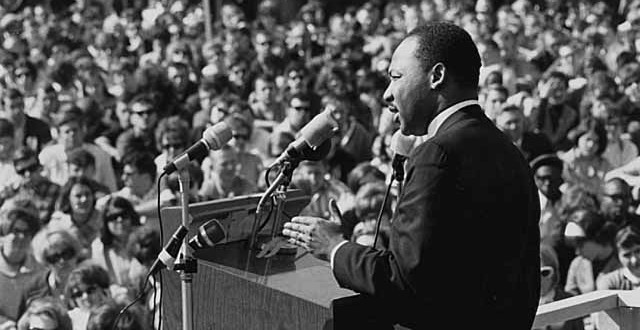 King speaking to an anti-Vietnam war rally at the University of Minnesota, St. Paul on April 27, 1967 - Minnesota Historical Society

Christ Church Cathedral in Saint Louis, MO, invited the other Cathedrals across the Episcopal Church to preach on Ferguson sometime this Advent. At St. John’s Cathedral, here in Spokane, we took them up on that invitation.

There are at least three reasons that this letter surprises me so much. First, it letter looks directly and without euphemism at the experience of being a person of colour – in Dr. King’s language, of being a negro – in mid-century America, it tells the truth about the thousand and one dangers and humiliations of being born into that time with dark skin. Second, it speaks frankly and unapologetically about King’s goal of precipitating a crisis, of his belief that there is something fertile and generative about crisis, that it is within crisis that righteous change is most possible. Third – and this might actually be the most shocking thing about the letter – it is never apathetic, never cynical. Dr. King may be angry and impatient and frustrated, especially with those people whom he calls the “white moderate,” but he is always hopeful.

I read Letter from a Birmingham Jail for the first time before I started seriously reading scripture. And so I didn’t realise that these three characteristics that surprised me so much – truth telling, crisis building, and hope – are also what firmly roots Dr. King’s letter in the Gospel. Jesus is all about truth telling, crisis building, and hope. And therefore I’d like to suggest that the prophecy found in this letter speaks to a world far beyond a jail cell in the Deep South 50 years ago. It speaks to us right here and right now.

If your Facebook feed looks anything like mine, it has been lit up the last several days with commentary about Ferguson, Mo., about the grand jury’s decision not to indict Darren Wilson, the police officer who shot Michael Brown, and about the protests and the riots that have followed that announcement. (If you’re not on Facebook, I bet that your radio or TV has told a similar story.) These last few days have not necessarily shown us social media – or, for that matter, humanity – at its best.

A great many of things that I have seen on Facebook’s big white wall are accusatory, reactive, short on fact and long on anger. To put that thought another way, a great many of the things that I have seen on Facebook feature people becoming more deeply entrenched in whatever their opinions, their beliefs already were. In this respect, a lot of the reaction to Ferguson is similar to a lot of the reaction to Sept. 11 13 years ago. Facebook didn’t exist back then. But the sentiments that it records sure did.

The death of an 18-year-old is a tragedy – I hope that is a point on which we may all agree, regardless of how we believe that death came about. The trauma of that violent death, which will echo for years to come through the lives of Officer Wilson, of his family, of Michael Brown’s family, of witnesses, the list goes on, is a tragedy. The destruction, via rioting and looting, of small businesses and of the dreams of which those businesses are an outward and visible sign, is a tragedy. Ferguson is a tragedy of many layers. And we owe it something better than to uncritically retrench ourselves in whatever our beliefs already were about race in America and policing in America.

I’d like to suggest that the Gospel offers us a another way of looking at Ferguson. So, with Dr. King as our inspiration, I’d like to spend some time thinking about truth telling, about crisis building, and about hope.

The difficult invitation to truth telling also means making room for the stories of first responders and of police officers in particular. Over the last few days, we have heard a lot from politicians, from police chiefs, from attorneys – from what I will call senior managers. And we heard little from the folks who actually work in law enforcement on the street. We may find that hearing their stories introduces an important and challenging moral nuance into this conversation.

Jesus insists on telling the truth. And he insists on hearing the truth. The Gospel story is about a man who refuses to populate his world exclusively with PLUs – with People Like Us. Who populates it instead with people of every conceivable walk of life, who gathers around the table with everyone to speak and to listen. Dr. King’s story is the same.

Second, crisis building. I am not a visionary. And I am certainly not a visionary on the order of Martin Luther King Jr. or on the order of Jesus. And thus, I am going to fess up right now that this stanza of my argument will necessarily be the most incomplete part of what I share with you this morning. I don’t know what kind of crisis we are called to build. But I do know that the disproportionate likelihood that a black person will die in an act of violence, the disproportionate likelihood that a black person will be incarcerated, the tragedies of Ferguson – these things demanda crisis. These facts call out for a crisis.

Dr. King built a crisis in which, as the dogs and the clubs and the water canons were turned on children, the face of racism in America could no longer be hidden. Jesus built a crisis in which, as he carried the cross, the brutality of Empire and those who collaborated with it could no longer be hidden. The crises that these people constructed changed the world. As people of faith, we are called to be on the lookout for the prophets who are building holy crises right now. That’s hard work, because it means setting aside our yearning for stability and stasis and preservation. It means setting aside our deep desire to believe that, while crisis was perhaps necessary in the 1960’s, we don’t need it any more. It means participating in the work of building such crises.

This is a particularly important reminder for us. Because it is easy to dress up cynicism and world-weariness as sophistication, to shrug and say that things are playing out in Ferguson just the way that I predicted and to pretend that such a thing is wisdom. It is not wisdom. It is apathy. It is hopelessness.

Previous Coffee Talk Today: Being a Person of Faith in a Consumeristic Culture
Next Church safety seminar coming to Spokane