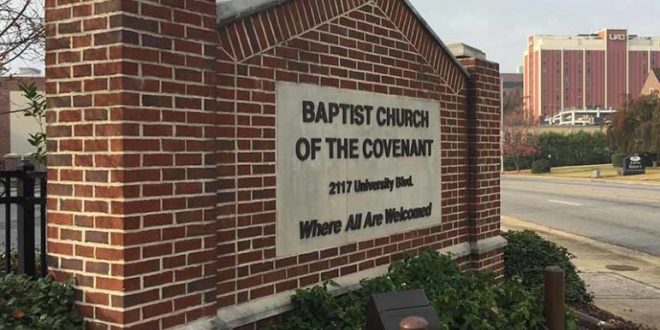 This grocery ministry, started more than a decade ago by volunteers at Baptist Church of the Covenant, a downtown Birmingham congregation, helps mostly elderly residents living on fixed incomes buy their weekly groceries and fill their prescriptions.

Lisa Whitman and Tim Liptak, the two church volunteers this week, have contributed a combined 16 years to the effort.

Many Baptist churches — Alabama’s largest denomination — do good works around the city. But Baptist Church of the Covenant is different.

As the nation focuses on white evangelicals, who make up the core of support for Republican Roy Moore in his bid for a U.S. Senate seat in Tuesday’s (Dec. 12) special election, this church presents an alternative vision of Christian faithfulness.

While Moore’s brand of Christianity — he is a member of First Baptist Church of Gallant — does not ordain women or allow LBGT poeple to serve in leadership positions, this church does.

Born out of desegregation battles, Baptist Church of the Covenant in Birmingham’s Southside neighborhood has a woman as senior pastor, and it counts among its members black and white, interracial couples, a large LGBT contingent and a group of homeless people who regularly drop in.

“This is the first place that actually allowed me to be myself and experience the love of God in a totally different way, with strangers that were more welcoming than the church I grew up in,” said Whitman, a lesbian who has been in a committed relationship for 16 years. “That’s what it should be.”

The history of Baptist Church of the Covenant is the story of Birmingham’s fight for desegregation. 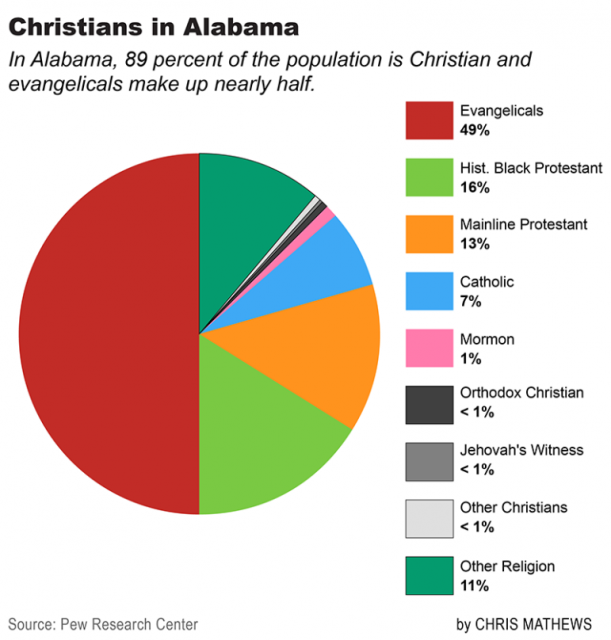 In 1970, black worshippers Winifred Bryant and her daughter Twila Fortune asked to become members of the white First Baptist Church of Birmingham.

When church leaders refused, some 250 members walked out. With nowhere to go, they found temporary refuge at Temple Emanu-El, a Reform Jewish congregation, which opened its doors and allowed them to hold services in its sanctuary on Sundays.

Three years later, the group bought land in Birmingham’s Southside, a neighborhood where few white people wanted to live in those days. While First Baptist Church of Birmingham relocated to Homewood, a mostly white suburb, this congregation dug its roots in the urban core.

From its start, the group made a commitment: It would welcome anyone who wants to worship Jesus. Full stop.

Over the years the congregation has tried to keep that commitment.

On Wednesday evenings, it hosts a community meal, which typically draws homeless people. On Sunday mornings it holds a class for children with developmental disabilities. And on Saturday mornings, Liptak, Whitman and other volunteers drive a church van to the federally subsidized apartment building to help handicapped and elderly people buy groceries.

The congregation, now numbering about 400 members, is not the only Baptist church in Alabama to promote women and LGBTQ people.

But amid a sea of more than 3,000 Alabama churches affiliated with the Southern Baptist Convention, Church of the Covenant and nearby Southside Baptist Church have carved out a new path.

Both congregations affiliate with the more moderate Cooperative Baptist Fellowship, which approves of women’s ordination. (Alabama has 25 churches affiliated with the CBF.)

They also affiliate with the Alliance of Baptists, which affirms LGBT people — the only two churches in the state to do so.

“You would hope there would be more Baptist churches in the area that are closer to our historical Baptist heritage, more outward-looking to the needs of people and finding ways to address that than just preaching a hard message of condemnation,” said the Rev. Timothy L. Kelley, pastor at Southside Baptist Church.

But that hasn’t been the case, he said.

In most white Baptist churches here, God and country, patriotism and Christianity are melded together.

In rural regions of the state, such as Moore’s native Etowah County, the former judge is a hero for defying federal court orders — first over his refusal to remove a Ten Commandments monument outside his courthouse and a second time when he denied same-sex couples marriage licenses.

“Judge Moore has stood up to our ideals and our religious principles and he was willing to lose a well-paying job for it,” said Charles T. Brown of Ivalee, an unincorporated community in Etowah County.

For these Christians, Moore represents a way to reclaim the past.

“Many of these Alabama churches are experiencing a loss of Protestant privilege,” said Bill Leonard, professor of church history at Wake Forest School of Divinity. “That’s part of why the Roy Moore case is so divisive. He represents the old line. Why would anyone not want the Ten Commandments at the statehouse? That’s Protestant privilege. But to them it looks like persecution of Christians.”

Despite some grumbling from members, Baptist Church of the Covenant has not endorsed either Moore or his opponent, Democrat Doug Jones.

Sarah Jackson Shelton, the pastor for the past 15 years, is adamant about the separation of church and state — a historic Baptist principle now out of favor in some churches.

“The truth of the matter is that if we’re really supposed to love our neighbor as ourselves, then if Doug Jones or Roy Moore showed up here on a Sunday morning we would seat both of them and worship with both of them,” Shelton said. “That’s what Jesus would call me to do and that’s pretty uncomfortable when my preference is to only love one of them. Faith says I’m to love my neighbor like myself.”

‘An embarrassment to the state of Alabama’

After finishing their grocery run, Liptak carries several plastic bags’ worth of groceries into Jackie Presley’s apartment and deposits them on her kitchen counter.

Frail and in a wheelchair, Presley asks him for one last favor: Could he please open the bottle of milk and the bottle of orange juice before he leaves? Liptak gladly obliges and stays a few minutes more to chat.

Two things they do not discuss — his sexual orientation (he is gay), or Tuesday’s special election.

That’s not the purpose of the ministry, and both Alabamians keep it light.

But Liptak, who works as a maintenance supervisor at a health facility for people with mental and physical disabilities, does not shy from telling a reporter he will vote for Jones.

Moore has compared homosexuality to bestiality and thinks it should be illegal. Liptak also takes exception to Moore’s denials of inappropriate behavior toward teenage girls earlier in his career.

“He’s so righteous that there’s obviously something wrong,” said Liptak. “Usually somebody who is the most against something has the most to hide.”

In Birmingham and other urban enclaves such as Huntsville, Moore has plenty of detractors, including Republicans who don’t count themselves as evangelical.

“Many people view Roy Moore as an embarrassment to the state of Alabama,” said Joseph Smith, professor of political science at the University of Alabama. “Electing Roy Moore is going to create and cement an image of Alabama as unfriendly to gays and lesbians and as a state where church and state are not really separated.”

Among those who think this way are many mainline Protestants — Methodists, Presbyterians and Episcopalians. Last month, a group of 60 Christian clergy, more than half from mainline Protestant denominations, signed a letter saying Moore was “not fit for office.”

Shelton was not among them. Though the church has good relations with many mainline Protestant churches, in keeping with historic Baptist principles, she stands apart.

“It’s kind of lonely,” she said. The church’s positions, she added, mean its relations with other churches are more like “quiet friendships, and behind-closed-door type friendships.”

Amid the many Baptist churches, this one is charting its own path.

Previous The Gap between Lightning and Thunder
Next Ask a Jew: How do ultra-Orthodox Jews support their large families?