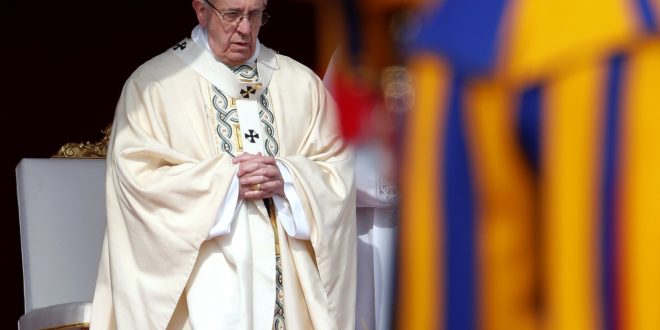 VATICAN CITY (Reuters) – Pope Francis denounced “oppressive regimes” in his Easter message on Sunday but in an apparent call for restraint urged world leaders to prevent the spread of conflicts, as tensions rose in North Korea and Syria.

Francis, marking the fifth Easter season of his pontificate, said Mass before tens of thousands of people under exceptional security measures in St. Peter’s Square following recent vehicle attacks against pedestrians in London and Stockholm.

More police vans and army vehicles than usual were positioned at the entrances to the Vatican area and the faithful were stopped at several check points leading into the square, which was decorated with 35,000 flowers and trees.

In his Urbi et Orbi (to the city and the world) message, delivered from the central balcony of St. Peter’s Basilica, Francis spoke of a world lacerated by conflicts and laced with tensions.

From the same balcony from where he first appeared to the world on the night of his election in 2013, Francis spoke of God walking “beside all those forced to leave their homelands as a result of armed conflicts, terrorist attacks, famine and oppressive regimes”.

He did not name any specific governments.

“In the complex and often dramatic situations of today’s world, may the Risen Lord guide the steps of all those who work for justice and peace. May he grant the leaders of nations the courage they need to prevent the spread of conflicts and to put a halt to the arms trade,” he said.

Francis spoke hours after North Korea warned the United States to end its “military hysteria” or face retaliation as a U.S. aircraft carrier group steamed towards the region and the reclusive state marked the 105th birth anniversary of its founding father.

Concern has grown since the U.S. Navy fired 59 Tomahawkmissiles at a Syrian airfield last week in response to a deadlygas attack. That raised questions about U.S. President Donald Trump’s plans for North Korea, which has conducted missile and nuclear tests in defiance of United Nations and unilateral sanctions.

Francis also condemned the bomb blast on a crowded Syrian bus convoy that killed at least 112 people outside Aleppo as an “ignoble” attack, asking God to bring healing and healing and comfort to civilian population in what he called the “beloved and martyred Syria”.

Speaking on the most important day in the Christian liturgical calendar, he called for peace in South Sudan, Sudan, Somalia, the Democratic Republic of Congo and Ukraine.

A surprise downpour hit Rome as the Mass was held but it passed quickly, allowing Francis to ride around in an open pope mobile so people at the back of the crowd could see him.

Repeatedly during Holy Week services, Francis has drawn attention to the plight of war victims, refugees and migrants.

On Good Friday, he spoke of the “shame” of humanity becoming inured to daily scenes of bombed cities and drowning migrants.

Previous 5 Reasons I do not Believe in the Physical Resurrection of Jesus Christ
Next Ask a Jew: How do I explain God in Jewish terms to a 4-year-old?