On death and diapers

On Monday night a handful of organizers, five panelists and 40-some interested individuals gathered at Liberty Park United Methodist Church to discuss abolishing the death penalty. Shar Lichty of the Peace and Justice Action League of Spokane arranged the event, involving Sarah Schmidt of Amnesty International. I participated as a panelist speaking on the issue from the perspective of faith. I sorted through my closet and found a clean clergy-collared shirt. Then I found the collar, a white band of folded plastic with brass buttons on the end. It is not only a public sign of my role as a pastor, but also a favorite toy of my curious toddler and often ends up under various pieces of bedroom furniture. I dressed, collected my notes and thanked my spouse for taking care of our boy while I went to this important meeting. 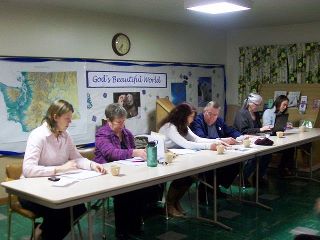 There is a long, long list of good reasons to oppose the death penalty.

The five voices contributing to the discussion last night did well in covering different angles of the need for abolition. The reasons springing from faith are unique and important within that list.

As a Lutheran, I oppose the death penalty because it denies the power of God to redeem, recreate and reconcile. Its finality, its irreversibility, means it is not ours to wield. When I read the Bible I find a mandate for enemy love: while we were yet sinners, Christ died for us. The cross, itself a witness of violence, affirms the will of God for nonviolence. Jesus, faced with a kill-or-be killed encounter, chooses to be killed. Our enemies, even those we deem guilty of terrible offenses, are not ours to kill but ours to love. This means we sheath our swords and create safe ways to account for wrong and, when we must, remove wrongdoers from our midst through confinement.

And, it's Lent. So perhaps it's fitting to acknowledge I also oppose the death penalty because of my understanding of sin. Again, the biblical view is that all fall short of God's ways, are captive to sin and thoroughly broken. Sin is not so much a little checklist of all the times I lied or lusted; it is that I, and all human beings, exist within, and participate, in sinful systems that distort creation and other human beings. In that sense, I share in the culpability of those on death row. This does not lessen the severity of their crimes or remove their responsibility. It widens our understanding of responsibility and asks us to be truthful about the death-promoting ways we have built our society.

When we employ the state in killing, we not only fool ourselves that we're eradicating the problem, “snuffing out evil,” in fact we become the monster we wish to eradicate. We wind up endorsing sinful systems of poverty and racism because we've chosen a route by which we don't have to face them. I came home from the panel just as my son was being dried off from his bath and the bedtime ritual was beginning. I held him in his warm footie pajamas and nursed him to sleep. Echoes of the discussion resounded through me. Almost 150 individuals have been exonerated from death row after receiving a proper trial with the right evidence.

Family members of death row inmates become condemned citizens themselves with no rights, essentially cut off from their loved ones. As my son finally fell asleep, a detail I had read in a memoir by Sr. Helen Prejean came to me powerfully, “At the time of execution, the inmate is stripped naked and clothed in a diaper to be ready for the moment of death in which all normal bodily functions fail.” All at once, we are citizens and we are parents. We are pastors, teachers, law enforcement works and judges.

We are humans, interconnected and bound together as a human family. We cannot parse ourselves apart or excise that which we decide is less-than. In mothering my child, I may complain about the never-ending task of diapering and cleaning clothes. I also love it, and treasure that physical bond I share with my child. In the case of our use of the death penalty, a tender act like diapering turns from tenderness into a bleak reminder of how deeply state killing dehumanizes us. We splinter ourselves and our human family. We fail our bodily functions and the bodily connection we have in our creator. By the abundant grace of God, let us be integrated. Let us bravely face the evil within our social systems and trust God's power to help us in healing them.

Let us love one another by striving to be just, safe and honoring of God in all things. Let us put away our practices of death, especially state killing. Let us be reconciled as a human family.