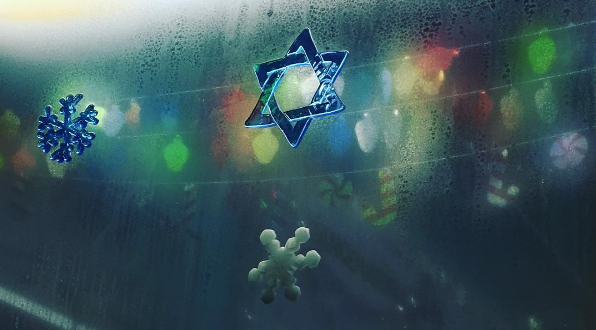 Decorations in a store window/Hyphen Parent

On Chanukah (and Beyond) Representation Matters

Being Jewish can be a vastly different experience depending on where you live.  We’re originally from the Northeast where there’s a larger Jewish population. Public schools have off for the high holidays.  You pass a large number of other Jewish people at the store. The (non-Jewish) local news anchors sprinkle Yiddish into their reports.

Over the years, we’ve moved across the country, always to areas with small Jewish populations. While living in those places, we spent a good deal of time explaining aspects of Judaism that were common knowledge even among non-Jews when we were kids.

I always considered Spokane to be kind of the middle of the line. While people often tell me Spokane is very Christian and conservative compared to Seattle, we found it incredibly open and inter-faith-friendly when compared to Oklahoma.  The Jewish population is small in Spokane, but, we didn’t feel as ignored or treated with hostility as we did in other more conservative areas.

We’re back in the Northeast right now and I’m only just beginning to realize how invisible we were in Spokane.

We are seen, heard, and acknowledged here. There is Jewish representation here. My kids are excited to see other obviously Jewish people at the store. Aside from the times we ran into Rabbi Hahn, the Chabbad rabbi at the super market, that never happened in Spokane.  There’s a great deal more representation of all faiths here. We see quite a few women in Muslim head coverings as well as a diversity of skin tone, language, and culture that you just didn’t see in Spokane. The local mall’s display isn’t limited to Santa and Christmas trees. There’s also a giant hanukiah there as well. Stores have “Happy Chanukah” banners hanging alongside sparkly candy canes.  A local dance school has star of David decorations hanging in their front window. The news has an often-featured hanukiah on their desk.  Fast food restaurants have  wooden hanukiahs on the counter. A local airport has a huge one at the gate.

These are not just Jewish-owned businesses. Many don’t even have any Jewish employees. These are places that represent Judaism and Chanukah simply because representation matters.

I’ve always known we weren’t nearly as visible as the Christian majority, but it wasn’t until I came back here where Judaism is acknowledged that I realized just how invisible we were in other parts of the world.

Every time we come across some aspect that acknowledges Chanukah, my kids get excited. The weather woman is always featured next to the hanukiah and my daughter must loudly announce its presence every time. We all gasped and jumped for pictures when we came across the hanukiah at the mall.  Even my teens point out Chanukah decorations in spaces where we never expected them.

I asked my children how they feel about seeing themselves reflected and how that compares to Spokane.

My 7-year-old explained, “There’s a ginormous hanukiah at the mall. That’s so cool!  I never saw that in Spokane. Most people in Spokane don’t even care about Judaism.”

My oldest daughter added, “Here they know we exist. People actually have Chanukah decorations. In Spokane they didn’t seem to know Jews exist. Here they even had Jewish heritage night (at a 76ers game last weekend).  There were so many Jews there. We got to wear glow-in-the-dreidle glasses and people didn’t even think we were weird. They just complimented us on them. In Spokane, something like that would never happen. People there don’t pay attention to other religions. They’re more concerned with Christianity. If you walk around Spokane, you wouldn’t even know we exist.”

Sometimes you don’t realize how invisible you are until you go somewhere that openly acknowledges your existence.  Representation matters.  It’s important to see yourself represented and to know that others see you as well. There is an excitement and a comfort in simply being acknowledged.  So too is there an uneasiness and opposition in places where your existence is erased.

Previous Local clergy say pope’s move to allow priests to forgive abortion is an example of mercy, grace
Next Carrie Fisher Is Dead: There Is No Witty Title For This