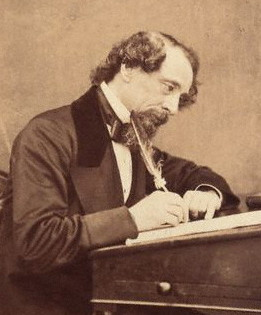 On 200th birthday, there’s no ‘bah humbug’ for Charles Dickens

“I will honor Christmas in my heart, and try to keep it all the year. I will live in the Past, the Present and the Future. The Spirits of all Three shall strive within me.”
– Ebenezer Scrooge from “A Christmas Carol.”

WILMINGTON, N.C. (RNS) ‘Tis the season for “Bah Humbug” and “God bless us every one,” especially as the world caps off a year of celebrations for the 200th anniversary of the birth of novelist Charles Dickens.

Starting this weekend as the Christmas season begins with Advent, cities will transform their streets to Victorian English landscapes with strolling carolers and stage different productions of Dickens' most famous yuletide work, “A Christmas Carol.”

Cities across the United Kingdom and France have major events planned, including a cemetery tour of Dickens family graves, festivals, museum exhibits and a Dickensian Market.

During the 39th Dickens on the Strand in Galveston, Texas, the city will hold a world record birthday card signing. San Francisco will host its annual Great Dickens Christmas Fair. The walking tour “A Dickens of a Tour: Charles Dickens in Washington” continues through December and celebrates Dickens’ visits to the U.S. capital.

Dickens' actual birthday was Feb. 7, but celebrations continued throughout 2012, especially at Christmas.

Dickens’ works are full of morality tales about caring for the poor, the plight of child labor, the pitfalls of greed, and the importance of neighborly love. But what were the author’s own spiritual beliefs?

International Dickens expert Elliot Engel has said Dickens' writings did more to define current Christmas traditions than any other modern author. We caught up with Engel, president of the Dickens Fellowship North Carolina chapter, to learn more about Dickens’ Christmas spirit.

A: He didn’t like the church much. He was a Unitarian because the Anglican Church offended him because of the hypocrisy he saw in it. Many of his novels satirize priests who he felt abused their positions in the church. He wrote a book for his children called “Life of Our Lord” because he believed the New Testament and Sermon on the Mount were the very best guidance for how to live. In it, he tells the story of Jesus in a way young people can understand.

He was very devoutly spiritual. But “Christian” would be the wrong word. In “A Christmas Carol,” there’s only one mention of Christ. Yet, Scrooge’s conversion was very religious.

Q: In Dickens’ writings, he satirized hypocrisy, poverty, avarice. Where did he get his moral compass?

A: Let’s be honest, he and his wife had nine children, and he dumped her in 1857 and took up with his mistress. So he was no angel. He was a great friend and fine father in most ways. He was a rather domineering father at times. His father was a spendthrift and was thrown into debtors' prison, and Charles was chosen to work as a child in a blacking or shoe polish factory. He never went back to school and was totally self-taught after age 16. He never forgave his mother and father for picking him to be the one to work to pay off the debts.

He had, you might say, great expectations of his own abilities, and he was right, of course. He was given no choice but to help. He thought he’d been abandoned by his parents. It hardened him in a way that was not flattering. “Turn the other cheek” was not part of his Sermon on the Mount. He could be a very jovial person, but underneath that was a very troubled man.

Q: Which of Dickens' works do you feel have the strongest moral messages?

A: “A Christmas Carol,” hands down, because it’s so accessible to anybody. So many people can appreciate it as a work in the theater. It’s also his shortest work. The average length of a Dickens novel is 700 pages, and people don’t have time for a work that length anymore.

A: The only song mentioned in “A Christmas Carol” was “God Bless Ye Merry Gentlemen,” but good will toward men would be the main idea of his Christmas spirit. His great characters aren’t always intellectual, but they always have a huge heart. Brains are secondary. They recognize fellow travelers to the grave. All of his heroes and heroines have that quality of empathy, understanding that we’re all in this together and we have to help each other, and that’s really the only quality all his heroes have in common.

(Amanda Greene is the editor of Wilmington Faith & Values.)

Previous Peace in the Middle East: We can do it
Next PRESS RELEASE: Episcopal Presiding Bishop to visit Yakima County and Spokane