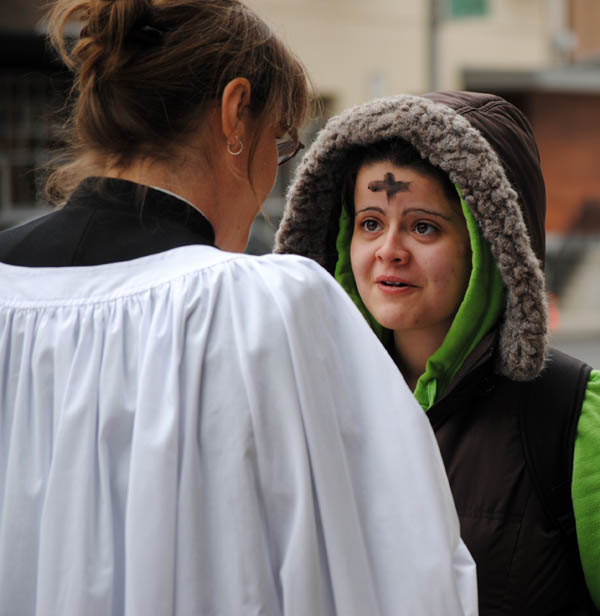 Naomi Calkins-Golter, of Rosalia, didn’t have time to go an Ash Wednesday service this morning.

She’s a working mom, and her kids had a half-day of school, so when she saw clergy imposing ashes outside Riverpark Square, she was quick to walk over and ask for a blessing.

“I thought it was the coolest thing ever, I got to get ashes,” she said. “Because of the logistics of the kids and work, I couldn’t have done it.”

The Rev. Kris Christensen, deacon and urban missioner at Holy Trinity Episcopal Church, has participated in Ashes to Go downtown for a number of years. Rev. Bill Osborne of St. Stephen’s Episcopal Church and Lynda Maraby of The Oak Tree joined her for the mobile service.

Ashes to Go began in 2006 or 2007 by Episcopalians in Missouri as a way to offer convenient pastoral care.

“The church, in empire mode, had gotten the expectation that people always come to us and the church needs to be back in the habit of going to the people,” Osborne said. “The church isn’t just one holy place. God’s people are also out on the street and we need to meet people where they are.”

Christensen agreed, adding, “The divine isn’t just inside church walls. We’re going out into the world and blessing what we see here.”

Ash Wednesday, the seventh Wednesday before Easter, marks the beginning of the Lenten season.

The name is taken from a practice of putting ashes on the foreheads of penitent believers as a reminder of their physical return to dust.

“I like the idea of Ash Wednesday because as my theology becomes more and more creation-based and as I progress, the idea of becoming dust is reminiscent of the bond between all created beings,” Maraby said.

When ashes are imposed on one’s forehead, the words, “Remember you are but dust, and to dust you shall return,” are uttered.

Osborne said this is a reminder of our mortality.

“It reminds us that we are finite and calls us back to the creator that made us,” he said.

Christensen said she plans to do Ashes to Go downtown again next year and hopes more people of faith will participate. She said laypersons and clergy of all denominations are welcome.

Previous Meet Elizabeth Backstrom, reporter
Next Some advice for the new pope