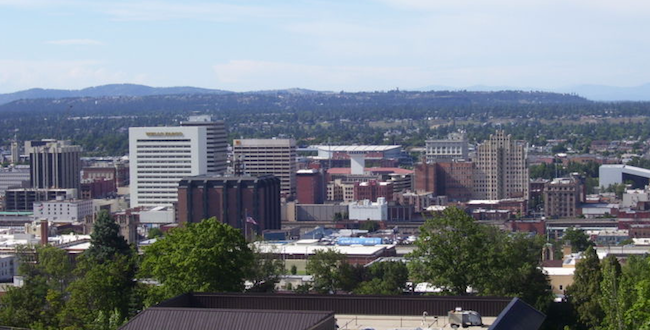 Wikipedia photo of Spokane by SpokaneWilly

Of Ghettos and Groceries

Last weekend on the sidelines of a football game, I found myself discussing a topic that has popped up a couple of times with different people over the summer.  “Have you noticed the changes in the demographics of our neighborhood?  Theft is up at the grocery store — at the department stores.  My neighbor had his bike stolen right from his garage!” These comments brought echoes of an earlier conversation where a person involved noticed the “changing demographics at the grocery store.  And they’re not the good kind of changes.”

“It’s all these damn low-income apartments they’re sticking up here”.

Spokane is not unique as issues of gentrification, growth, and changing neighborhood demographics are a part of communities across the map.  This past spring I found myself in Denver for a conference.  Walking around, I found Denver to be a really cool city. They’ve made intentional decisions to allow walkers and cyclists to access all parts of downtown.  I was surrounded by those with money, and those without homes.  Denver is a typical city center, where downtown boarders traditionally poor neighborhoods, leading to richness in diversity.  I hadn’t realized until I got to Denver how much construction was ongoing, as the city not only worked to build up, but also to revitalize and expand the affluent core of the city, pushing on the poorer neighborhoods. Denver is a case study in gentrification.

In Spokane, gentrification conversations have taken place as Perry District has been on the upswing, Kendall Yards has exploded, and the effect of the north-south freeway have been in the newspaper and discussions.  Gentrification is often a romanticized idea, where a community revitalizes and reshapes neighborhoods, creating prosperity, and safety, where before there was none.  In reality, gentrification is filled with myths and carries a much blurrier truth .  This past spring, the Inlander summed it up.  Gentrification sucks.

One of the issues that arises with gentrification and, in Spokane’s case, construction of the I-90 North/South Freeway interchanges, is that people are displaced.  People who have lived in neighborhoods partially because they can afford rents are pushed to find affordable choices elsewhere.  Some argue gentrification in one area leads to ghettoification in another. As construction and revitalization gains steam, people are on the move.  With an influx of apartment buildings and the closing of a grocery store lower on the hill, the conversations I’ve been in center around “what is happening to our store?”  As with seemingly all other aspects of society today, even where people buy their kale is as a dividing line of community.

One of the themes that seems to be running through these conversations is a concern for safety of property and self. Life, liberty, and property are strongly held ideals that the country was founded on. Both Republican and Democratic leaders speak out about crime, even as they differ greatly on what the solutions are.  I have had things stolen from my garage and my car while I’ve lived in both poor and not-so-poor neighborhoods.  I understand the protection response, and struggle with how to be a trusting, loving, soul, and protecting my family and our property from the “utter depravity of man”.

While I understand the need for distrust and providing safety to my family, I also wonder about the subtext that is occurring within these conversations about the ghettoification of Spokane’s South Hill, especially in light of Christian theology.  What should my response be as conversations turn to changes in the community, and my daily routines bring me into closer contact with those dealing with poverty, food insecurity, and systemic bias?

While not being a purely biblical premise, I was taught early in life that “God helps those who help themselves” — as the puritan work ethic was a hook you could hang all social solutions upon. I am not surprised by the Pew Research findings that white evangelical Christians are much more likely to believe that poverty is caused by a lack of work ethic, and that people who are rich simply worked harder than anybody else.  This mantra is one I heard from various corners of my life in small town Montana growing up.  The American dream was available to everybody – and those that worked hard, kept their noses clean, and dreamed the biggest dreams would be rewarded.  I connect with this post-World War II American theology in my core.  When looking at poverty, crime, and ghettoification through this lens, it is easy to put up “us vs. them” barriers and seek solutions for keeping them out – or at least in check. Allowing people who aren’t as affluent into the neighborhood means the floodgates to the lazy are open. These lazy people will steal instead of work (so we must protect our goods and property) and they will lower our school standards.  It makes sense.

However, I also find myself holding this prosperity gospel teaching up against the teachings of the Bible as I walk in the world, and the theology doesn’t hold up. In 1942, William Temple explored the role of Christians in politics and society in his work Christianity and Social Order. Temple states “Our standard of value is the way things affect us,” which takes us away from focusing on what God moves us toward. More recently, Francis Spufford describes it as the human propensity to screw things up.

I’ve always been aware of Jesus’ call for Christians to go into the world and share the Gospel. This imperative is a key distinction between Christianity and other religions.  “Go” and how best to go are key debates among the different denominations within Christianity, but Jesus’ call to “go” is core.  As a Presbyterian I haven’t always been comfortable with how we’re supposed to undertake that call.  As I pass by anti-abortion protest signs on trucks on campus, or see the street corner preacher, I wonder how many people have been brought to deep life change by being screamed at.  Is that the going that I’m supposed to do?

Going, I’ve found, is easy to understand when it comes to visiting a neighborhood, completing a volunteer stint, or sitting with the underprivileged.  In practice, while I don’t think about returning home and getting out of the “go,” I do know that it doesn’t take me long to return to complacency.  While some of the go-events have stuck with me and led to deep reflection and spiritual growth, I do live in a comfortable come-home daily life.

While fear, us vs. them, and protecting ourselves from the other is the external conversation, the tension between “go” and “come” is also found in these conversations about what is best for the neighborhood.  Christianity, service, and caring for others may not be easy when it is a part of “go,” but it does allow us to compartmentalize our life and actions with others.  What becomes more difficult is what to do when those we label as being those who we are supposed to go to – interact with and then leave – become our physical neighbors.

This has been the heart of my struggle with the conversations I’ve been involved in about the changes that are occurring in the neighborhood that I live in. My limited selfish views of how the world ought to be make clear my own human propensity to f-things up. There is a tension between what is of the world, and what God desires.  William Temple wrote that humans are “made in the image of God; and second, that image has been stamped upon an animal nature.  Between these two there is constant tension resulting in perpetual tragedy.”  We’re not called to remove ourselves from the scary places and uncomfortable realities of daily life. Rather, we are moved to be in the world, to be with the lives and experiences of others in community.  Jesus said to love our neighbors, and to build community with those around us.  We don’t get to choose who our neighbors are.  Instead of wasting our time and energies focused on who the right kind of people are that should be able to buy groceries, or attend schools, we are called to make the “them” a part of “us” and to build community together.

Previous The Sacredness of Showing Up Part 3: Pray and Pursue
Next Ask A Jew: What is God’s Name?