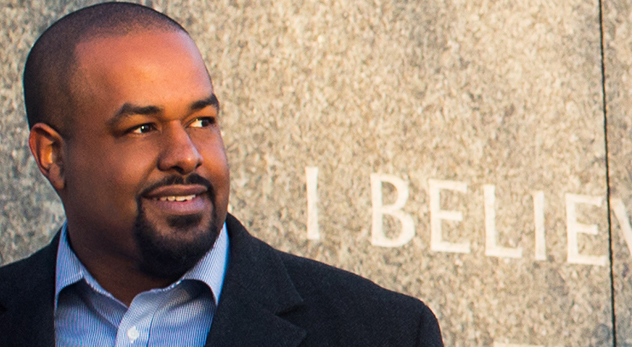 In the midst of the 2008 Presidential campaign, one man—Senator Obama’s Director of Religious Outreach—was concerned about the soul of the future President. Though Joshua Dubois prayed privately for Obama, he was compelled to go one step further, emailing the President a daily devotional reading.

For the first time ever, a collection of those devotionals have been released through DuBois’ new book, The President’s Devotional, Here, we discuss President Obama’s spirituality, many conservatives’ charge that he isn’t really a Christian, and the First Lady’s faith.

JM: You’ve shared a lot of devotional material in this book. Is there one you felt was particularly influential on the President?

JD: Let me start off by saying that I can’t speak for the President. He has said many times how meaningful the devotionals have been to him. And I’m honored that he would say that. I think, though, however, that there are some that are particularly resonant, particularly those that weave in history and culture together with Scripture to make a point. So there are a few.

There’s one that’s about British Prime Minister Lloyd George. And it’s basically about how to approach tough times. Lloyd George was in the middle of several different conflicts at once: he had World War 1 to worry about, along with the Irish Republican Army, and a financial crisis. And he still kept a very positive countenance. And someone asked him, “How are you so happy all the time, with all this going on?” He responded, “A change of nuisance is about as good as a vacation.”

So I just use that to illustrate the same point in the book, that suffering produces endurance, and endurance character, character, hope. We must look at the challenges we’re facing as opportunities to add to our set of experiences and our wisdom rather.

I think that’s one that resonated with the President. Obviously, ones on Abraham Lincoln as well. He’s a jazz fan, and so there’s one about Nina Simone and King David and their ability to write their own lyrics to their lives in challenging times.

JM: When was the moment in your tenure that you felt the President was at his spiritual lowest and what did you write in your devotional to try to lift his spirits?

JD: I would go back to when I first started writing. This was a moment during the 2008 Presidential campaign, I was the Director of Religious Outreach at the time, and I saw him—then Senator Obama—as someone who had tremendous faculties. He was intelligent, he was a strong leader, he had a lot of support around him as well—political support and policy advice. And even Secret Service protection! But I didn’t see a lot of folks who were thinking about his spirit, his soul. And those were particularly tough times. We were dealing with the worst economic crisis of our lifetime. Senator Obama had to respond to that as a candidate. We were dealing with attacks from the other side, his political opponents. And it was at that moment that God kind of tugged at me and said, “Instead of just praying for him privately, by yourself, why don’t you reach out to him? Why don’t you share an encouraging word with him?” So that was kind of how the whole thing got started.

I can’t speak for him and say that that was necessarily a low moment, but it was definitely a time when he was going through a number of challenges.

JM: A lot of conservative evangelicals questioned the authenticity of the President’s Christianity. They argued, for example, that you can’t be Christian and pro-choice. How did these accusations make you feel and how do you answer these critics as one who has seen the spiritual side of Barack Obama firsthand?

Visit My Website
View All Posts
Previous “The Singing Nun”
Next BRIEF: Whitworth to host lecture on faith and skepticism