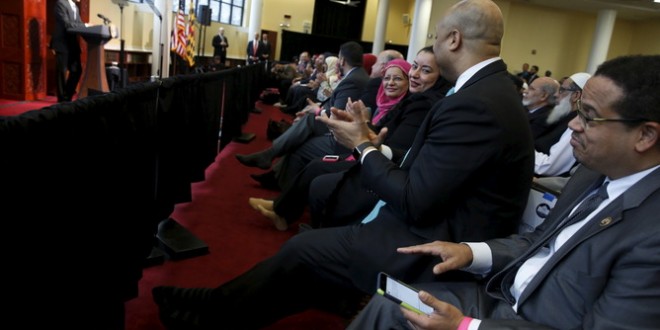 Obama’s speech at Baltimore mosque was powerful, but was anyone listening?

Last Thursday, President Barack Obama visited a mosque at the Islamic Center in Baltimore, Maryland. He delivered an unusually long and nuanced speech on the status of the Muslim community in the United States.

Because of the recent terrorist attacks in Paris and San Bernardino, in combination with the over-the-top rhetoric of Donald Trump and other GOP candidates in the presidential primary campaign, Muslims in the United States have been having a pretty rough time of it lately. Attacks on Muslims and their institutions in the United States have dramatically increased since November.

In an attempt to reassure the community and, just as importantly, communicate with the American public and the media, President Obama gave us a script for dealing with a religious minority in a liberal democracy. In his speech, he said,

If you’re ever wondering whether you fit in here, let me say it as clearly as I can, as president of the United States: You fit in here – right here. You’re right where you belong. You’re part of America, too. You’re not Muslim or American. You’re Muslim and American.

This is in contrast to the Old World philosophy that distinguishes a person of Algerian descent from a Frenchman, a Japanese citizen of Korean descent from a Japanese or someone of the Bahai faith from an Iranian. No one in the United States has an original claim on being an American. We are all at some point in our family tree from somewhere else. Thus, it makes no sense at all for us to exclude groups from our society on the basis of their beliefs or origins. The president’s speech is a terrific rendition of this argument that many see as fundamentally American.

The question is, was anyone listening?

The power to educate

As a lame duck president, Obama is limited in the things he can do.

In the modern era, a leaving president can have little to do with selecting his own successor – besides tending to his own popularity. Also gone for a lame duck is the hope of getting his program passed through Congress, especially when that Congress is controlled by the other party, as is the case for Obama. But one thing the president can do is use his office as a bully pulpit.

Traditionally, we think of presidential speechifying as a part of what Richard Neustadt termed the “power to persuade.” But it strikes me that President Obama’s speech at the mosque is of a different nature.

President Obama is uniquely suited to this role. He is by nature reflective and cerebral. As I argue in my book, Pitiful Giants: Presidents in their Final Terms, lame duck presidents often are more themselves in their final years in office then they are earlier in their careers. No longer do they need to worry about building support or running for office.

Some presidents, like Teddy Roosevelt, are triumphant in their final months. Others, like Woodrow Wilson, seek redemption. Still others like Calvin Coolidge are simply exhausted from running a marathon sprint.

President Obama is instinctively an intellectual. Now, given the chance to rise above petty politics and the issues of the day, he is returning to his roots as a professor.

In the last few months, we’ve seen a different President Obama. He appears more relaxed and at the same time more assertive as he enters his final year. It is interesting to me as someone who studies leaving presidents that President Obama is experimenting with what he can do at this stage in his final term.

He’s attempted to make his mark by issuing a broad order on immigration, delivering a slightly innovative final State of Union – and now by bringing his presidency into a Muslim place of worship. Whether he succeeds in recreating the lame duck presidency remains to be seen. But the fact that he is experimenting seems to be in his nature.

After Eisenhower was elected but before he took office, Dean Acheson, President Truman’s secretary of state, described his last meeting with the NATO Council in December 1952 this way:

Our (foreign) colleagues treated us with the gentle and affectionate solicitude that one might show to the dying, but asked neither help nor advice nor commitment for a future we would not share with them. For this they were waiting for our successors.

By all indications, President Obama doesn’t plan to go quietly into his post-presidency. We will watch with interest as President Obama struggles against his looming irrelevance.

Previous Father Knows Best: Is there ever a time that abortion is ethical?
Next Disillusioned Mexicans await Pope Francis’ visit