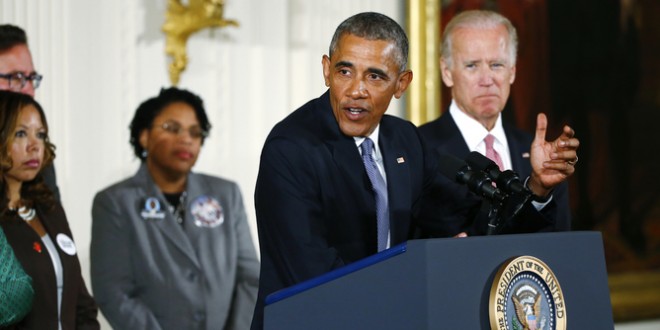 U.S. President Barack Obama stands with Vice President Joe Biden (R) and family members of shooting victims while delivering a statement on steps the administration is taking to reduce gun violence in the East Room of the White House in Washington January 5, 2016. REUTERS/Carlos Barria - RTX2152L

US President Barack Obama is taking aim at the so-called “gun-show loophole”.

Obama’s most recent executive order on gun control attempts to clarify a distinction in federal firearms regulations between gun sales by businesses and guns sales by private individuals.

Currently, federal law requires businesses that sell guns to possess a federal firearms license. That license demands that sellers do criminal background checks on anyone who purchases a gun from them. By contrast, the law leaves personal transactions unregulated.

Is such a distinction warranted?

Defenders insist that background checks on private firearm transfers – for example, between family members, collectors, and gun enthusiasts – would unduly burden the private ownership of firearms. Critics allege that the “loophole” is exploited to sell guns to people who couldn’t pass a federal background check.

Polls reflect widespread support for universal background checks in the wake of recent mass shootings. This support exists among Democrats and Republicans. Even a majority of gun owners support it. But Congress has steadfastly refused to extend background checks to private gun sales.

Lawmakers most recently refused to pass such a change in December just after the mass shooting in San Bernardino.

The legislative process is intentionally designed to make it difficult to pass legislation over the strong opposition of a minority group. In this case, the extreme wing of the NRA membership has the ear of key congressional players like House Speaker Paul Ryan and Senate Judiciary Committee Chairman Charles Grassley whose support is necessary to advance legislation. The result has been legislative deadlock.

Obama’s executive order is an attempt to bypass this legislative deadlock.

The executive order has been carefully crafted to survive a court challenge. It does not erase the distinction between business and private firearms sales. Rather, it broadens the definition of a business and provides for stricter enforcement of restrictions on business sales by hiring additional personnel to conduct background checks.

Yet, even the president has admitted that the executive order is “not going to prevent every mass shooting”.

There is evidence that unregulated private sales – over the internet and at gun shows – are a source of guns for individuals who are ineligible to purchase or possess a firearm. However, the weapons used in recent mass shootings in San Bernardino and Umpqua Community College in Oregon were acquired legally at federally licensed gun stores or through private transactions that likely wouldn’t be affected by Obama’s new rules. In other words, the president’s executive order would not have stopped these shooters.

The president’s executive order and its focus on the “gun-show loophole” is largely political theater. Act II will be his upcoming town hall meeting on CNN.

Although these new rules might have a marginal effect on reducing illegal sales through a slight expansion of background checks for some sales previously considered private, it falls far short of gun-control advocates’ longstanding efforts to close the “loophole.” They want universal background checks, plus bans on high powered firearms, high capacity magazines, and armor-piercing ammunition. They also want mandatory gun owner liability insurance and federal funding for gun violence research.

Other items in the executive order include modernization of processing operations for background checks, using the federal government’s purchasing power to push development of smart gun technology, and stricter requirements for reporting lost or stolen guns to federal authorities.

Although Obama has taken center stage on this issue, presidential candidates of both parties are playing supporting roles. Democratic candidates Bernie Sanders and Hillary Clinton have called for closing the gun-show loophole, although neither has explained how they would make it happen.

On the Republican side, candidates Donald Trump, Ted Cruz, Marco Rubio, Jeb Bush and Chris Christie have spuriously suggested that the president’s modest proposals to clarify and more vigorously enforce existing regulations would infringe on the Second Amendment right to own a firearm and represent an attack on private gun ownership.

In the end, the president’s executive order is well within his powers to enforce the law, although given his inability to break the legislative stalemate over universal background checks, his powers to advance significant gun controls are extremely limited.

Moreover, with over 350 million firearms already in private hands, even the most ambitious proposals to limit firearms sales are unlikely to end high profile massacres that have become increasingly routine in the US.

Previous Ask A Buddhist: Was the Buddha a Deadbeat Dad?
Next Ask A Jew: What are the most important rituals in the lifetime of a Jew? (Part 2)