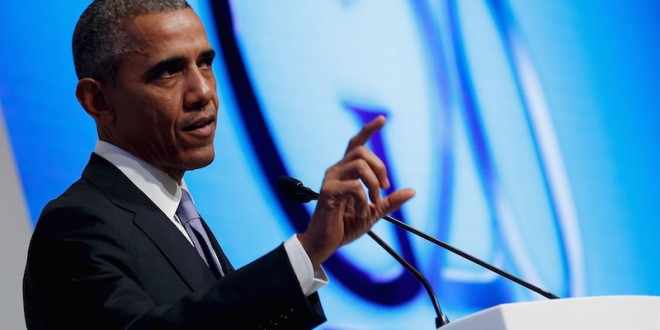 U.S. President Barack Obama holds a news conference with reporters at the end of the G20 summit at the Kaya Palazzo Resort in Antalya, Turkey, November 16, 2015. REUTERS/Jonathan Ernst - RTS7DRZ

Obama denounces religious test for refugees: ‘That’s not who we are’

(RNS) In some of his strongest remarks on the subject to date, President Barack Obama on Monday (Nov. 16) denounced calls for a religious test for refugees and immigrants, saying: “That’s shameful. That’s not American. That’s not who we are.”

The president made his remarks at a press conference Monday (Nov. 16) in Antalya, Turkey, at the conclusion of the Group of 20 meeting. He met there with other world leaders to discuss economic issues, but the attacks Friday in Paris quickly took precedence. At least 129 people were killed in coordinated attacks by the Islamic State group.

Some Republicans have suggested a religious or nationality test for Syrian and other Middle East refugees. A Syrian passport, stamped by authorities in Greece, Macedonia, Serbia and Croatia, was found near the body of one of the attackers, though authorities have yet to determine if it is authentic, or if it belonged to a refugee.

Texas Sen. Ted Cruz said over the weekend that the U.S. should only accept Christian refugees because they bring “no meaningful risk of committing acts of terror.” Jeb Bush, speaking on CNN on Sunday, said refugee efforts should be centered “on the Christians being slaughtered.”

“When I hear folks say that,” the president said, “when I hear political leaders suggesting that there would be a religious test for which person who’s fleeing from a war-torn country is admitted, when some of those folks themselves come from families who benefited from protection when they were fleeing political persecution, that’s shameful.”

“I had a lot of disagreements with George W. Bush on policy, but I was very proud after 9/11 when he was adamant and clear that this is not a war on Islam,” Obama said. “And the notion that some of those who have taken on leadership in his party would ignore all of that, that is not who we are. On this they should follow his example. It was the right one. It was the right impulse. It’s our better impulse.”

Republicans were not impressed with the president’s remarks. “With his excuse-laden and defensive press conference, President Obama removed any and all doubt that he lacks the resolve or a strategy to defeat and destroy ISIS,” said Reince Priebus, chairman of the Republican National Committee. “Never before have I seen an American president project such weakness on the global stage.”

The president at times seemed both anguished over the Paris attacks and frustrated with reporters’ questions, chiding them for asking the same question in slightly different forms. But he was also forceful in his statements that Muslims also bear a responsibility in rooting out extremists in their midst.

Some Muslims, he said, are “not as willing to challenge extremist thought or why Muslims feel oppressed.” Those ideas, he said, “must be challenged” by Muslims and non-Muslims alike.

“In the same way the Muslim community has an obligation not to in any way excuse anti-Western or anti-Christian sentiment, we have the same obligations as Christians, and we are, it is good to remember that the United States does not have a religious test and we are a nation of many peoples of different faiths, which means that we show compassion to everybody. … That is what my administration intends to stand for.”

Previous Violence, horror movies, and who to “look out for”
Next St. John’s Sunday Service to Feature Special Choral Eucharist