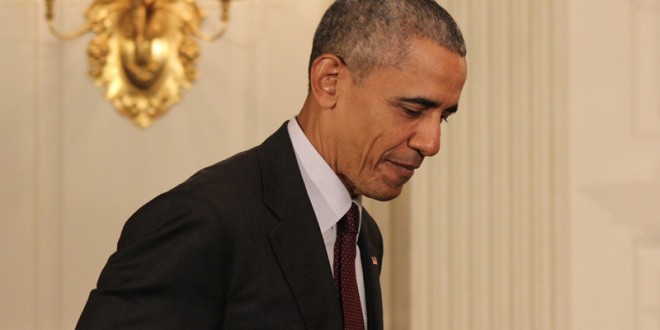 President Obama prepares to take his seat after speaking at his final Easter Prayer Breakfast at the White House on March 30, 2016. RNS photo by Adelle M. Banks

Obama at last prayer breakfast: ‘We heal hatred with love’

WASHINGTON (RNS)  President Obama hosted his last Easter Prayer Breakfast with Christian leaders, pausing to reflect on what he called a “bittersweet” occasion.

“Since 2010 this has become a cherished tradition,” he said to 140 Catholic, Protestant and Orthodox leaders, including denominational heads and prominent pastors, on Wednesday (March 30).

As he usually does, he used the occasion to speak openly about his faith within the context of world events, such as the recent terrorist assaults in Belgium and Pakistan.

“(T)hese attacks can foment fear and division,” he said. “They can tempt us to cast out the stranger, strike out against those who don’t look like us, or pray exactly as we do. And they can lead us to turn our backs on those who are most in need of help and refuge.

“That’s the intent of the terrorist, is to weaken our faith and weaken our best impulses, our better angels.”

But he said people of faith should remain strong.

“(I)f Easter means anything, it’s that we don’t have to be afraid,” Obama said. “We drown out darkness with light, and we heal hatred with love, and we hold on to hope.”

He also used the breakfast to shed light on his own Christian perspective.

“(O)ur faith changes us. I know it’s changed me,” he said. “It renews in us a sense of possibility. It allows us to believe that although we are all sinners, and that at times we will falter, there’s always the possibility of redemption. Every once in a while, we might get something right, we might do some good.”

Other than his annual remarks at the National Prayer Breakfast, chaired each February by members of Congress, the Easter Prayer Breakfast is one of the few regular opportunities to hear Obama speak about his personal faith.

Here’s a roundup of some of what he has said:

2015: ‘Less than loving expressions by Christians’

“On Easter, I do reflect on the fact that as a Christian, I am supposed to love. And I have to say that sometimes when I listen to less than loving expressions by Christians, I get concerned. But that’s a topic for another day.”

“(W)e have to keep coming together across faiths to combat the ignorance and intolerance, including anti-Semitism that can lead to hatred and to violence, because we’re all children of God,” he said after the shooting deaths at two Jewish facilities in Kansas. “We’re all made in his image, all worthy of his love and dignity. And we see what happens around the world when this kind of religious-based or tinged violence can rear its ugly head. It’s got no place in our society.”

“I was reminded that while our time on Earth is fleeting, he is eternal,” he said, recalling his recent trip to the Holy Land, including stops at sacred places in Jesus’ life such as the Church of the Nativity.

“His life, his lessons live on in our hearts and, most importantly, in our actions. When we tend to the sick, when we console those in pain, when we sacrifice for those in need, wherever and whenever we are there to give comfort and to guide and to love, then Christ is with us.”

“We all have experiences that shake our faith. There are times where we have questions for God’s plan relative to us … but that’s precisely when we should remember Christ’s own doubts and eventually his own triumph.”

(Adelle M. Banks is production editor and a national reporter for RNS)