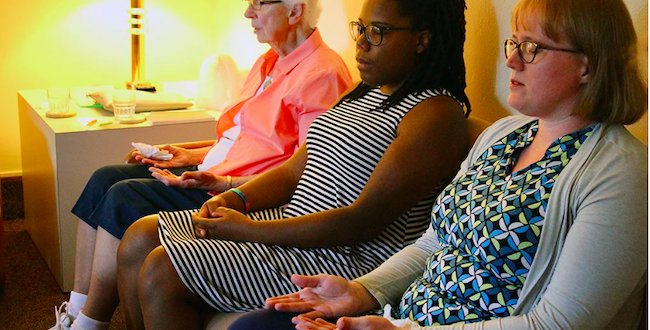 Sister M. Lucille Janowiak, from left, Kendra Avila and Sarah Weinreis Clark spend a few moments in contemplative silence at the beginning of a Sisters & Seekers meeting on July 7, 2019, at the Dominican Center at Marywood in Grand Rapids, Michigan. RNS photo by Emily McFarlan Miller

GRAND RAPIDS, Michigan (RNS) — The Dominican sisters sat in silence, eyes closed, palms upturned, couches and chairs pushed together into a circle in the room at the Dominican Center at Marywood in Grand Rapids, Michigan.

Their reading that evening came not from Scripture, but from poet Mary Oliver: “Though I play at the edges of knowing, / truly I know / our part is not knowing, / but looking, and touching, and loving.”

And the candle flickering in their midst didn’t invoke a saint, but author and activist James Baldwin.

Joining the Catholic women religious in contemplation was a group of young women who aren’t sure they’d describe themselves as religious in any sense.

The Sunday night (July 7) meeting, known as Sisters & Seekers, is one of about a dozen gatherings across the country affiliated with Nuns & Nones, a growing alliance connecting Catholic women religious, most of whom are over 60, with 20- and 30-something millennials, many of whom identify as religious “nones.”

Katie Gordon, a member of Nuns & Nones’ operational team, described the group as an experiment in what “different sort of forms of what community can look like and what action can look like today.”

“We know that there a much larger moment of reinvention and spiritual life that we’re a part of,” she said.

Both Sisters & Seekers and Nuns & Nones started in 2017 and quickly connected with each other, according to Gordon, who co-founded the Grand Rapids group. Neither had a mission, per se, she said — just a curiosity about what would happen if women religious and millennials came together.

Gordon, who identifies as agnostic, said she first met the Dominican sisters in Grand Rapids through her interfaith organizing work. She’d often see the sisters marching at protests. Then, as she got to know some of the sisters one on one, she began to see the possibilities for building relationships between them and her fellow millennials.

She had been raised Catholic, but she felt that the sisters she met represented a different Catholicism from the one she had known, she said.

“It’s really ironic and also beautiful to be able to engage with the tradition that I was raised in, but in a totally new way,” she said.

Gordon invited a handful of millennials to those first meetings. Sister Barbara Hansen of the Dominican Sisters, now a sister collaborator with Nuns & Nones, gathered the sisters.

The two groups started meeting together in the evenings for about two hours, usually at the Dominican Center, a brick building sitting on a lush, green campus with a sculpture garden and a sign in the lawn reading, “In this house, we believe: Black lives matter, no human is illegal, science is real, love is love, kindness is everything.”

Meantime, Nones & Nuns was hosting its first gatherings of about 20 people — half sisters, half millennials — for two-day retreats in Cambridge, Mass.

Since then, those gatherings have spread across the country.

Gatherings Throughout the U.S.

A group in Washington, D.C., met for the first time this week and is planning a series of potlucks as members get to know one another this summer. In Burlingame, California, five millennial men and women of different religious backgrounds just completed a six-month pilot residency with the Sisters of Mercy.

While the gatherings may look different, they all revolve around the same question, Gordon said: “What can these two groups learn from each other?”

Gordon believes women religious and millennial women have more in common than might meet the eye. Both are interested in community, in social justice and in asking hard questions about faith and spirituality.

“Any conversation with a sister is a master class in building community,” said the 28-year-old Gordon.

Hansen, 80, said the women religious find their faith deepened by the millennials in the group.

There’s no proselytizing at the meetings. And the sisters aren’t looking for their millennial friends to join their order or to seek out a religious vocation. Instead, they want to build bridges between beliefs and generations, something Gordon calls “a welcome antidote for our time.”

“To see seemingly two groups that might be very different actually come together and find so much in common is one thing that resonates,” she said.

As the meeting wound down on Sunday night in Grand Rapids, Ellie Hutchison, one of the group’s leaders, passed around postcards with messages like “Build bridges, not walls” and “None of us are free until all of us are free.” The group planned to write to lawmakers about the crisis at the United States’ border with Mexico.

Discussions at Sisters & Seekers meetings often center on what’s happening in the world and how to “stay healthy and centered and respond in effective ways,” Hutchison said.

In the past, that’s included everything from conversations about the existence of God and the afterlife to discussions about consumerism and capitalism, she said.

The group isn’t afraid of difficult conversations. Or to talk through their disagreements.

One discussion several months into the group’s meetings about queer identity and the Catholic Church left some feeling hurt or misunderstood. And the sisters and their millennial friends ran headlong into some generational differences around the topic.

But even that helped the group develop conversation guidelines as they continued to engage in difficult topics.

“I just so appreciate the sisters’ spirit because they are just generally so curious in getting to know us and hearing about our experiences and our thoughts on different issues. That curiosity is something that I haven’t often encountered with people who are several decades older than me,” said Hutchison, who is 26.

A Sense of Community

The biggest thing she’s taken from the group is a sense of friendship and community.

She said that can be hard to find  in West Michigan, where the first question many people ask often is, “Where do you go to church?” That can leave people who aren’t part of a church or another faith community feeling left out.

Hutchison grew up in the mainline Evangelical Lutheran Church in America, at a church that had more of a “megachurch evangelical feel,” she said. But she hasn’t attended a church regularly since coming to Grand Rapids to attend a Christian college.

“Even though we have different ideological beliefs on certain issues, it still is the place that, when I leave, I feel refreshed and more connected and more encouraged and hopeful than when I came, which is just, I think, the greatest gift,” she said.

Kendra Avila, 29, left the Seventh-day Adventist tradition in which she was raised several years ago. Sisters & Seekers has helped her find some of the spiritual depth she felt she was missing.

“I think spiritual life, spirituality allows you to live and have staying power in places where hard things at some point will burn you out,” Avila said. “But when you are doing it with others in community, you know that there are other people who are struggling with the same questions that you have. It helps you stay a little bit longer.”

That’s one thing the two groups share, said Sister Jarrett DeWyse, 77. The sisters have had a few more years of practice dealing with doubts and wrestling with questions that come up about faith, and they have centuries of spiritual practices to draw on.

“It’s OK to ask questions without answers,” DeWyse said. “We’ve had that for a long time.”