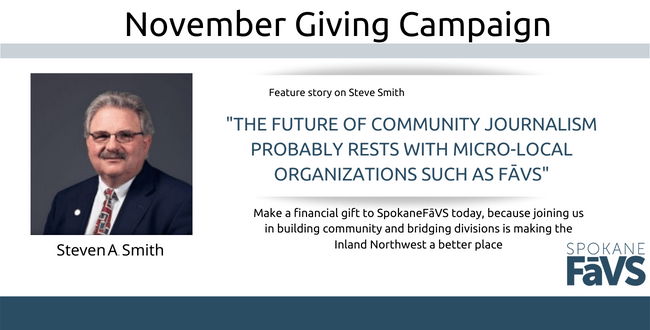 It was because of his junior high arch enemy that Steven A. Smith found his way into journalism.

His nemesis named him the school paper’s joke editor, the lowest job possible.

“I told my parents and friends I would never let that happen again, that I would run a real newspaper someday,” Smith said. “And happily I found I enjoyed reporting and editing and could never imagine doing anything else.”

He ended up working for nine newspapers over a 36-year span, including a six-year stint as editor of the Spokesman-Review from 2002-2008.

“I left the paper in September 2008 rather than layoff one third of a staff already decimated by layoffs,” Smith recalled.

He found a second career teaching journalism at the University of Idaho, where he spent 10 years before retiring just over two years ago.

Smith said teaching was the best career decision he ever made.

In retirement, he found his way to SpokaneFāVS, where so far he’s written 125 columns.

“I wanted to write again, something I had not been able to do while serving as a senior editor or college professor. And I had opinions I wanted to share. FāVS is such an amazing micro-local news site and the topics are so interesting I could not resist trying my hand at writing for the site. And it seemed I might have a perspective worth sharing,” he said.

He serves as the site’s only Agnostic Jewish writer.

Smith also serves on the SpokaneFāVS Board of Trustees.

He said it’s his way of saying thanks to an organization he admires.

He also supports FāVS financially because, he said, “The economics of the news business have changed. Traditional news organizations have lost their economic foundations. The future of community journalism probably rests with micro-local organizations such as FāVS. To survive, such organizations require community support. I write for FāVS. But I am also part of the community it serves.”

He hopes others will also support the organization with a financial gift.

“If you read FāVS content, you should be willing to pay for it. Any contribution has value, no matter how small. Financial support for micro-local sites is always fragile. Community support makes all the difference,” he said.