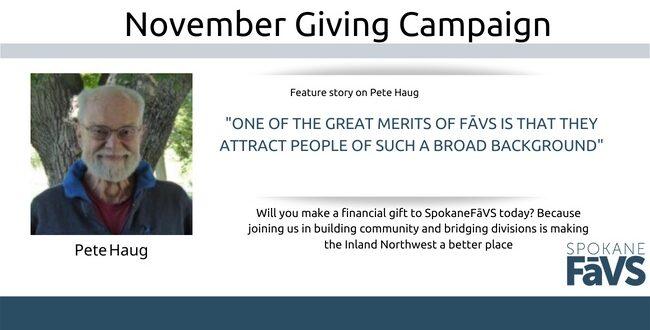 “I’ve been very fortunate,” Haug said. “Writing is one [skill] that I’ve been blessed with, and I’ve enjoyed it. I never thought much about it. It’s sort of a natural thing for me, like walking.”

And at the age of 86, Haug says he hopes to continue to write until he can’t anymore. In fact, a recent column is about the arc of aging and is one he is quite proud of writing. In it, he compares growing older to a rainbow: “I’m experiencing macular degeneration and other age-related ailments on the downhill slope of that arc. I’m losing eyesight, but not, I hope, my vision.”

That vision has carried Haug for more than 50 years’ as a writer in a several professions, from public relations work to writing for advertising agencies. He remembers writing for weekly newspapers when he had to literally “cut and paste” words together into final drafts. This, after they were typed out on “meticulously maintained” typewriters from the 1920s.

He’s done writing consulting, as well, from helping workplaces teach their staff how to decrease their writing anxieties to being employed as an environmental consultant tasked with putting together a manual on how to write scientific things.

Now, in this season of writing columns, he brings his love for his Baha’i faith and its social principles, which he says are “very ecumenical in the finest sense of the word,” to his FāVS work.

He has been writing a column every other week for SpokaneFāVS since 2020. The off weeks he doesn’t write for FāVS, Haug writes columns for Moscow-Pullman Daily News.

He finds the work he does within the FāVS “marketplace of ideas” exhilarating because it brings people together in a non-confrontational ways.

“I try to bring forth ideas that will unify people,” Haug said. “And one of the great merits of FāVS is that they attract people of such a broad background, a broad background of religious experience, because, from my own perspective as a Baha’i, there’s only one God.”

He also agrees with FāVS’ non-proselytizing ethic as a Baha’i, as that helps create a safe space where seekers can find or be comfortable in their own paths of belief or non-belief.

“One of the basic principles of the Baha’i faith is independent investigation of the truth and nobody can really lead you by the nose,” he said. “They can guide you, but they can’t really, in the final analysis, they cannot make you see things the way they do. You have to come to that conclusion. Once you have concluded that, it is yours and nobody’s going to take it from you.”