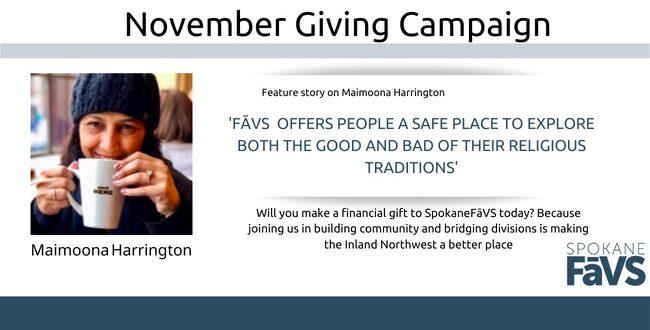 The Muslim name Maimoona means “safe” and “trustworthy” in Arabic.

For Maimoona Harrington, a columnist for SpokaneFāVs.com, that name fits her approach to writing from her distinct Muslim perspective. Her columns touch on feminism, abortion, a Muslim woman’s decision to wear or not wear a hijab and so much more.

While she says she tends to shy away from controversial subjects, if she does broach them — in addition to making her pieces safe and trustworthy — she makes sure they exhibit deep compassion.

For instance, one of the questions asked in the FāVS’ Ask a Muslim series was how a Muslim views same-gender attraction. As one of the writers for this series, Harrington explained that although their faith does not see same-sex marriage as an acceptable practice, she wrote that it’s up to each individual to decide between them and their creator.

“You have to go through a little bit of compassion by showing that, at the end of the day, I feel like it’s your choice,” Harrington said. “Yes, God has given us guidance and everything, too, but at the end of the day, he has given us our individuality. And he’s left it to us, and we are only answerable to him, nobody else. So that’s how I put it.”

Harrington emigrated from Pakistan to America, Kansas, specifically, in 2008. Before this, she worked with her long-time friend and former British Airways colleague, Naghmana Sherazi, who lives in Spokane and has also written columns for FāVS over the years.

It was through Sherazi that Harrington was introduced to FāVS five years ago. In the course of catching up with her friend, Harrington shared with her how she wanted to write about what it is like being a Muslim in America, to be able to share her experience across cultures.

“I want the communities here, or the Americans here, to know about us in a different way,” Harrington said. “I fear that because our communities are so uptight about holding on to their beliefs and articles and they’re worried that they get little bit loose, you know, they will lose everything and I think we should show them what we are.”

Sherazi told her about FāVS, and the rest is history.

What Harrington appreciates most about being able to write for SpokaneFāVS is the chance to explore a middle ground of understanding between different faiths.

“Because when you go online in the media, there are two extremes. One is defending Islam and one is against Islam. There’s not a middle ground I see anywhere,” she said.

She also thinks FāVS also offers people a safe place to explore both the good and bad of their religious traditions and to let other people ask their questions and to read columnists’ responses.

“People should start taking a little bit of criticism to their religion. People get so defensive,” she said. “There is no harm [in letting] people talk about [your religion], and then you have a chance to explain the way you feel instead of having those two extreme opinions all the time.”